A young woman who was diagnosed with stage-4 breast cancer has revealed the sign that something was wrong with her body, after she noticed a dimple under her right breast.

Natasha Tesic, 27, from Melbourne, initially thought the dimple was an innocent line from the underwire in her bra.

When she realised it was actually a tiny, hard lump, Natasha booked into see her doctor on June 24, 2019.

She was diagnosed with stage-3 and later stage-4 breast cancer, but reveals how cancer changed her for the better and she is the happiest she has ever been. 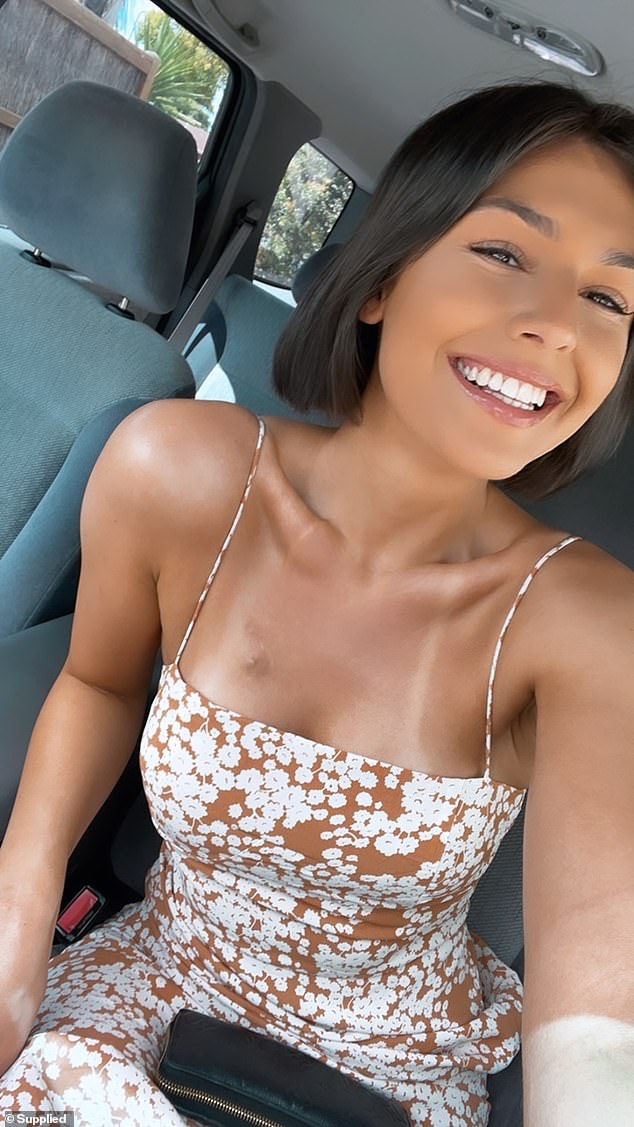 A woman who was diagnosed with stage-4 breast cancer has revealed the sign that something was wrong with her body, after she noticed a dimple under her right breast (pictured now) 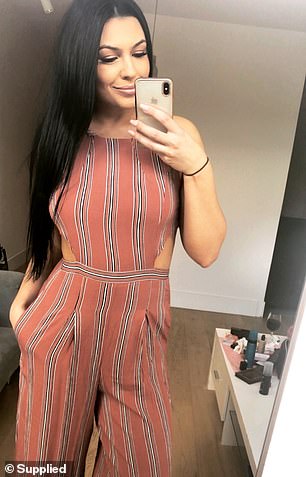 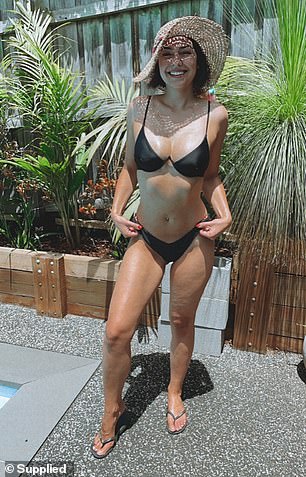 Natasha’s shock cancer journey started at the beginning of June 2019, when she noticed the dimple.

After seeing her doctor, who said it was probably ‘nothing to worry about’, she was sent for an ultrasound to be sure.

This is when the young woman’s world came crashing down.

‘The ulstrasound technician pulled two more people into the office to look at the scan,’ Natasha told Daily Mail Australia.

The next time she saw the doctor she was with her mum, who had just come back from overseas, and she was being told she had cancer. 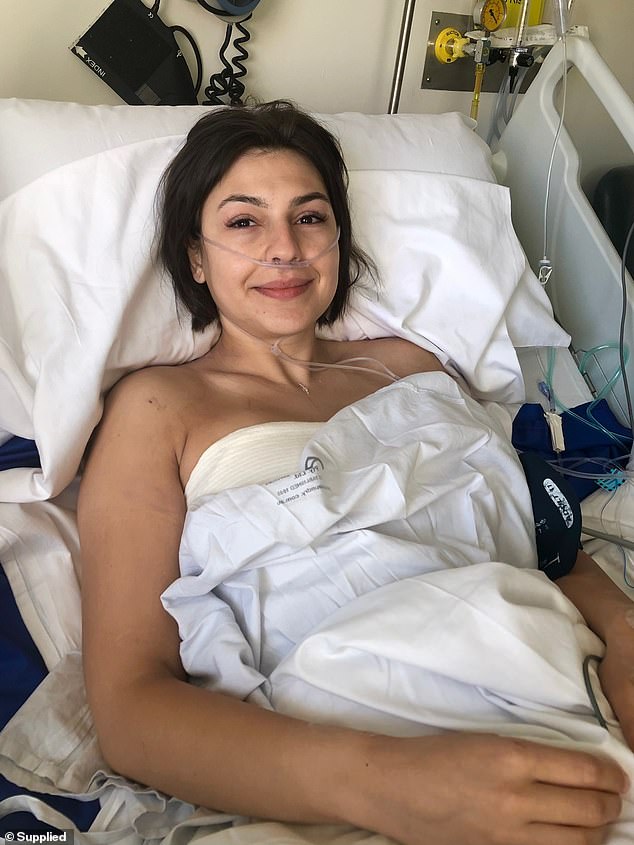 The young woman endure two rounds of chemotherapy – one in Thailand and one in Australia, pictured, which she described as being very tough on her body

An MRI and CT scan revealed the cancer had spread to her lymph nodes – making her a stage-3 patient.

‘There were two tumours in my right breast and lymph nodes and a shadow on my spine in a few places they put down to damage from my childhood,’ she said.

Natasha was in shock.

‘I was 26 – I had no family history of breast cancer – and they definitely don’t advertise for women under 40 to get checked out,’ she said.

Months later the tumour was a huge 4cm by 4cm lump.

‘It completely deformed my breast, when I looked at myself in the mirror after a shower I just saw cancer,’ she said. 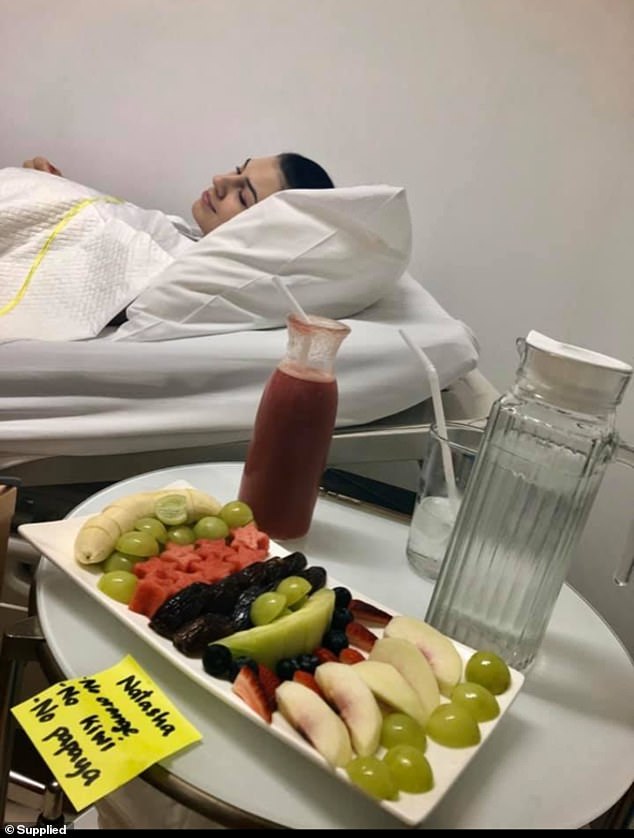 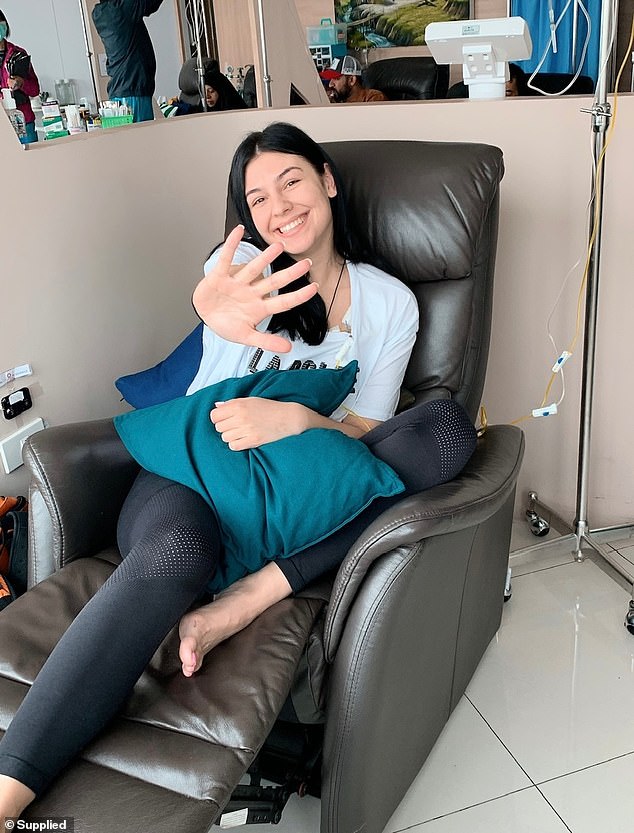 Natasha went to Thailand for treatment – after finding a centre which gives doses of vitamins and minerals with chemotherapy.

‘I wanted something that offered immune building alongside chemotherapy,’ she said.

She spent weeks at the clinic, taking a round of chemo six days every week.

And by the five week mark her breast tumour had shrunk by 60 percent. 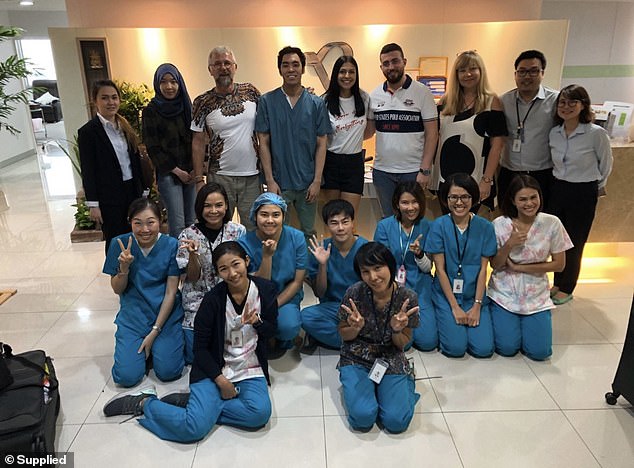 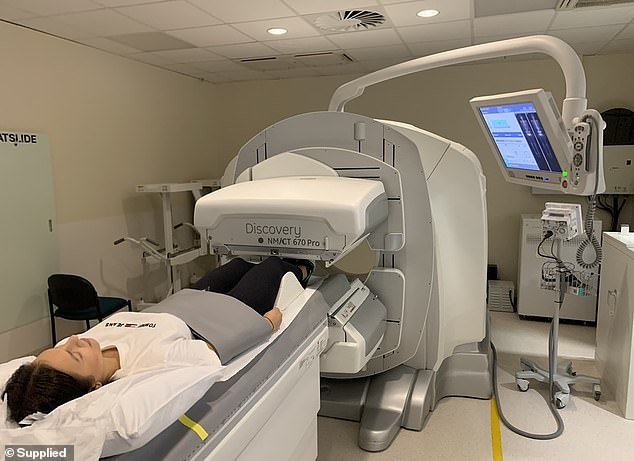 WHAT VITAMINS DOES NATASHA TAKE?

‘They told me to get onto a surgeon when I got home, and that should be it,’ she said.

But when her Australian oncologist didn’t agree she started to get scared.

A scan three weeks later confirmed the breast tumour had shrunk, but there were legions in her spine and live.

She then switched over to the Olivia Newton John Cancer Centre – and began more chemotherapy in November, 2019.

She finished in March and scans showed the tumours in her spine and liver had disappeared.

But there was one more tumour in her breast.

So she opted for a mastectomy.

This was complicated because stage-4 patients are rarely approved for the procedure because their bodies aren’t strong enough to heal after major surgery.

In December 2020, after she had healed from her breast cancer doctors revealed she was ‘cancer free’.

Natasha is now taking pills to keep different hormones at safe levels to stop the cancer from coming back.

‘The statistics online are horrid – they basically say I have a five-year life span – I try to block those things out,’ she said.

Since getting cancer she has taken more care of her physical health – cutting out sugar and other knows carcinogens from her diet.

She has also improved her fitness, nutrition and takes supplements to help support her body. 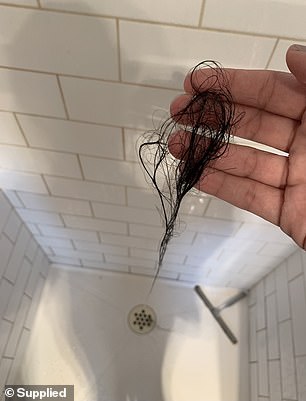 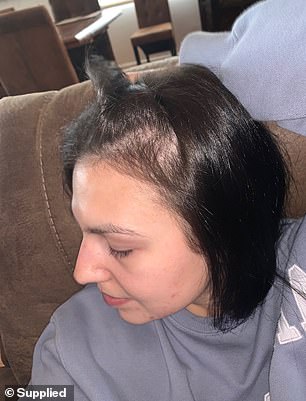 Natasha did have some hair loss, pictured left and right, but never lost all of her hair or felt the need to shave 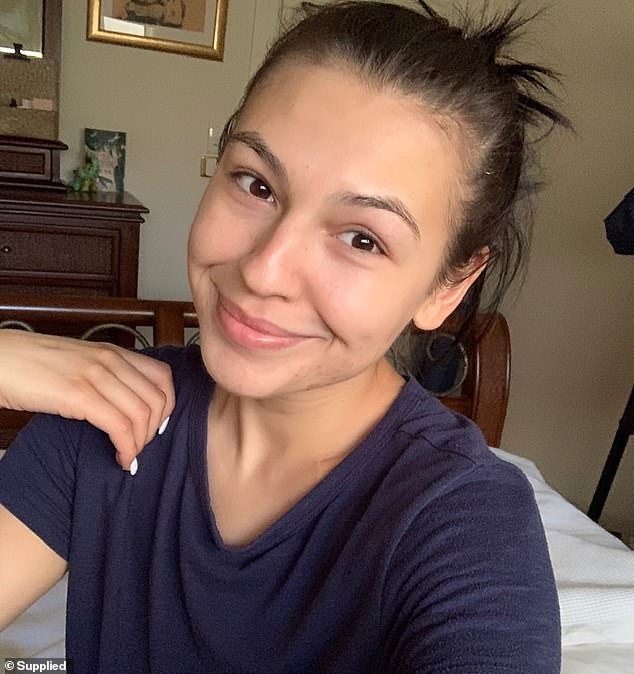 Natasha said she is now outgoing, confident and happy – after realising how precious life is

But despite battling the deadly disease for the past 18 months, Natasha said she feels better than ever and won’t let the ‘C word’ kill her:

‘People are telling me I am glowing – and I honestly feel great,’ Natasha told Daily Mail Australia.

‘I don’t think I have ever been this happy in my whole life.’

The confident young woman said her diagnosis transformed her – she is now more outgoing, doesn’t stress over details and has learned to live in the moment.

She is a self-described ‘cancer thriver’.

Natasha has vowed to make every second of her life count – is looking forward to becoming independent again and would one day love a family. 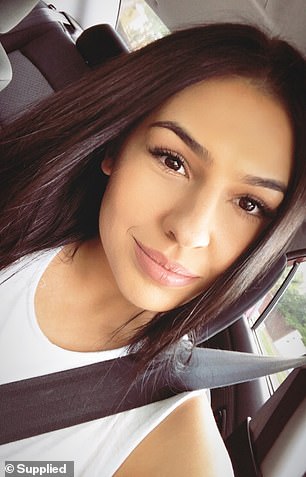 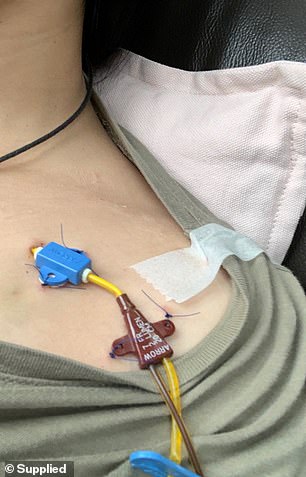 She is now cancer free, left, but has to go to hospital and take pills to control her hormones and to stop the cancer from coming back 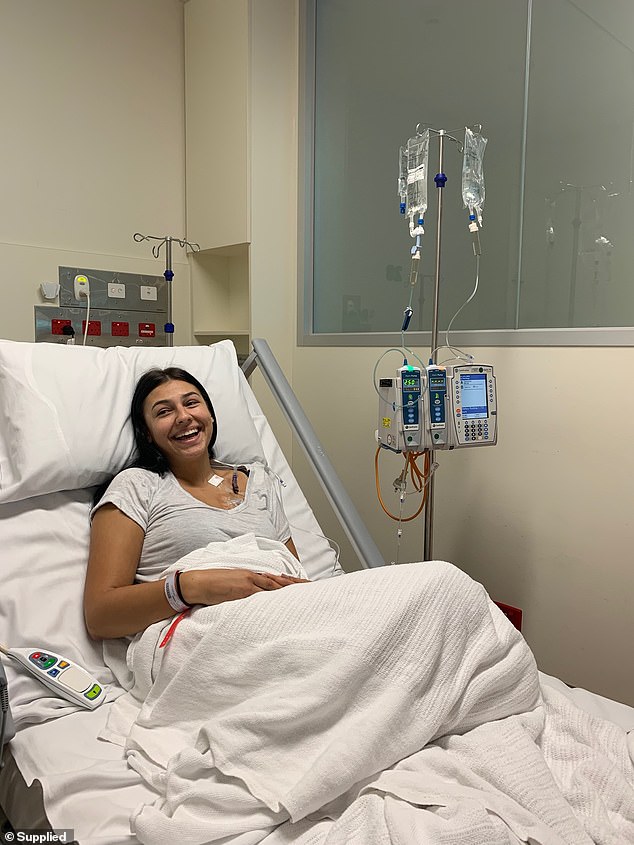 She has started a new job at a car dealership, after leaving her insurance job to focus on getting through her cancer battle.

The next big step will be to move out of her mother’s home – something which will mark a new chapter in her life – focusing on independence, happiness and living in the moment.

Natasha has been sharing her journey online and says the network of breast cancer thrivers, survivers and patients has helped her stay positive and informed.

They share information on reactions to drugs, treatments and surgeries and provide each other with critical social support.

‘Cancer its self is never on my mind. It isn’t a day-to-day thing. It is behind me,’ Natasha said.

She is going to pursue a job in the fashion industry – she always thought she would design ‘nice clothes’ – but now she wants to make specialised bras for mastectomy patients.

WHAT ARE THE SIGNS OF BREAST CANCER AND WHO CAN GET IT?

Breast cancer is the most commonly diagnosed cancer in Australia – one in seven women and one in 716 men are expected to be diagnosed with the disease in their lifetime.

In Australia, the overall five-year survival rate for breast cancer in females is 91%. If the cancer is limited to the breast, 96% of patients will be alive five years after diagnosis; this figure excludes those who die from other diseases. If the cancer has spread to the regional lymph nodes, five-year relative survival drops to 80%.

Most people with breast cancer don’t have a family history of the disease.

Signs and symptoms include the following:

New lumps, thickening in the breast, changes in shape or size of the breast and changes in the shape of the nipple.

Some women don’t have any symptoms and it is only found during a mammogram.

Women and men can be diagnosed with breast cancer. Anybody can. For both men and women, if you notice any new or unusual changes in your breasts, see your doctor without delay.