A young woman in Idaho had raised over $40,000 for an elderly DoorDash delivery driver after she watched him struggle on her front steps.

The video shows him moving slowly up and down her front stoop to deliver the food she ordered.

Touched, Anabelle shared the clip on TikTok and launched a GoFundMe for Kerry in hopes to help him finally retire — and donations have quickly poured in. 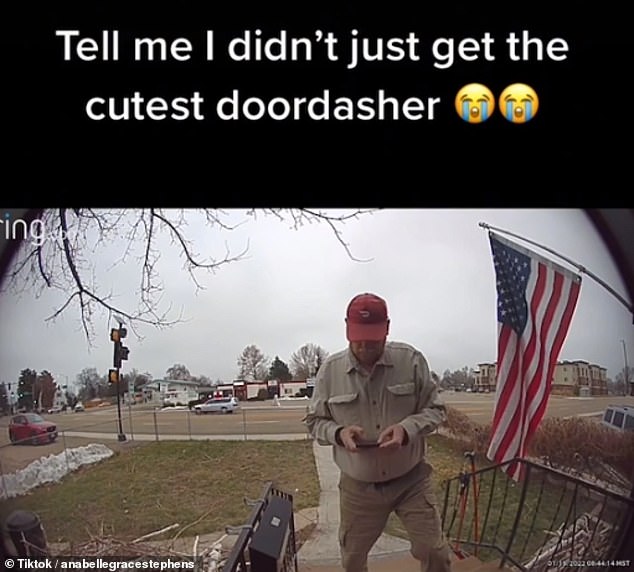 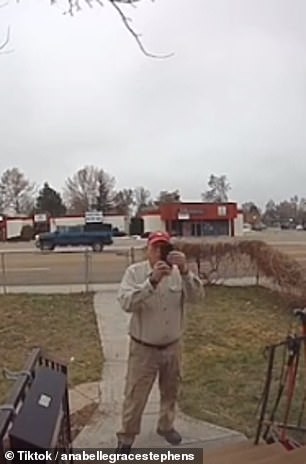 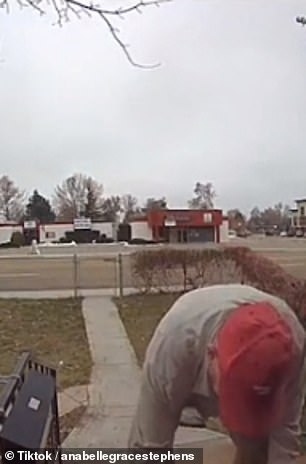 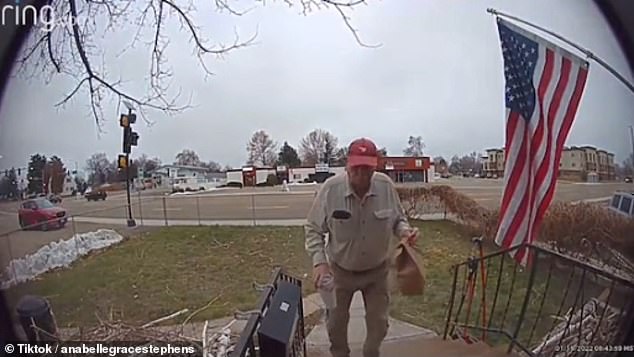 Widowed since 2011, he has two sons and works as a security guard and DoorDash driver ‘to make ends meet’

‘Tell me I didn’t just get the cutest door dasher,’ Anabelle wrote on TikTok with a pair of crying emojis.

The clip shows Kerry in a button-down shirt, slacks, and a red cap slowly walking up her front steps, a brown paper back and drink in hand.

He sets them down, then backs down the stairs slowly, coming to a stop on each step.

Anabelle appears to have been struck that a man Kerry’s age is still working to support herself and quickly leapt into action to help.

First, she chipped in herself by tipping him $30 on a $21 delivery.

She then contacted DoorDash to track him down, and was eventually connected to him. 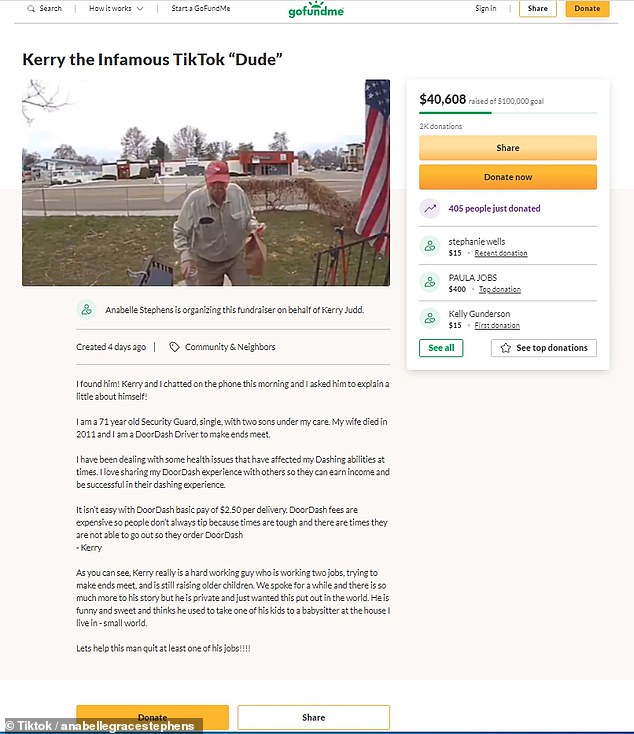 Annabelle set up a GoFundMe to help Kerry so he can stop delivering food. It’s raised over $40,000 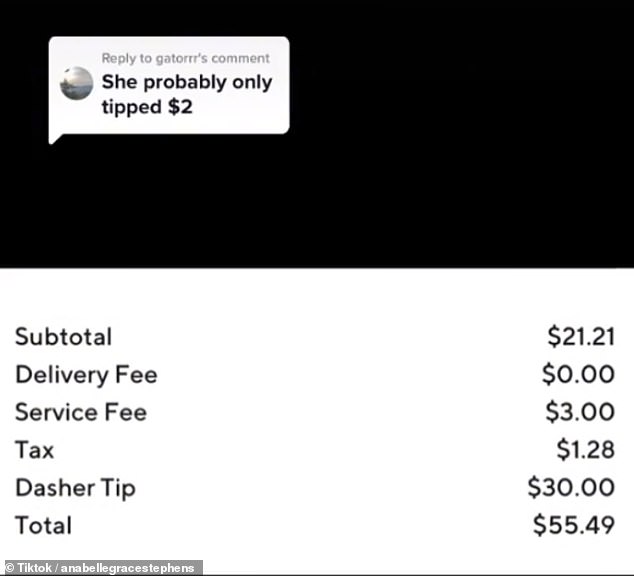 She also responded to critics, saying she tipped him $30 on the original order

‘I’m working on setting up a meeting with Kerry! His son reached out and said he’s a very private man. He’s been working basically his entire life and gone through a lot of hardships,’ she wrote in a followup video.

‘I gave his son my number and I am now waiting for Kerry to reach out to me so we can set up a meeting and hopefully help this man finally retire!’

Annabelle launched a GoFundMe for Kerry, which has raised $40,608 in four days.

She also learned more about Kerry’s background. Widowed since 2011, he has two sons and works as a security guard and DoorDash driver ‘to make ends meet.’

‘I have been dealing with some health issues that have affected my Dashing abilities at times,’ he said. ‘I love sharing my DoorDash experience with others so they can earn income and be successful in their dashing experience.’

He noted that the basic pay for DoorDash is just $2.50 per delivery, and because the app’s fees are so expensive, customers ‘don’t always tip.’ 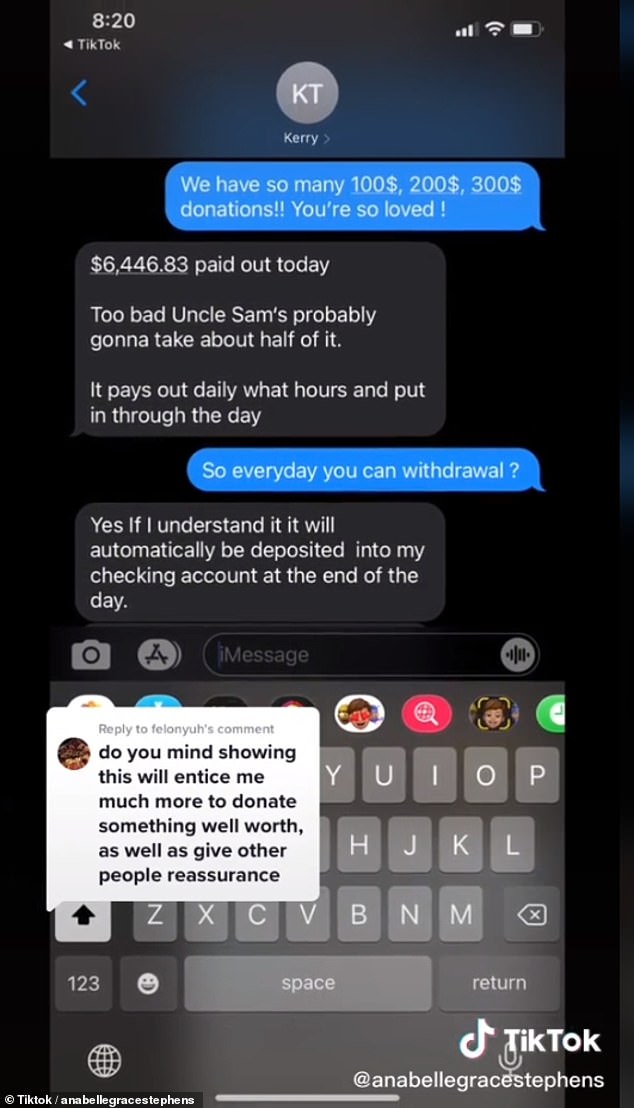 Annabelle has already set up the GoFundMe page to automatically transfer the funds directly to Kerry, and said she ‘can’t begin to describe the amount of support from across the world!’

Yet even though that means he is sometimes barely paid, he showed understanding.

‘Times are tough and there are times they are not able to go out so they order DoorDash,’ he said.

Annabelle has already set up the GoFundMe page to automatically transfer the funds directly to Kerry, and said she ‘can’t begin to describe the amount of support from across the world!’

‘This is beyond words and beyond what I could ever imagine! This is life changing for Kerry and that is ALL from you guys!!!’ she said on TikTok.

Yet while some viewers have found the story sweet, some seen it as proof that the American economic system is broken. 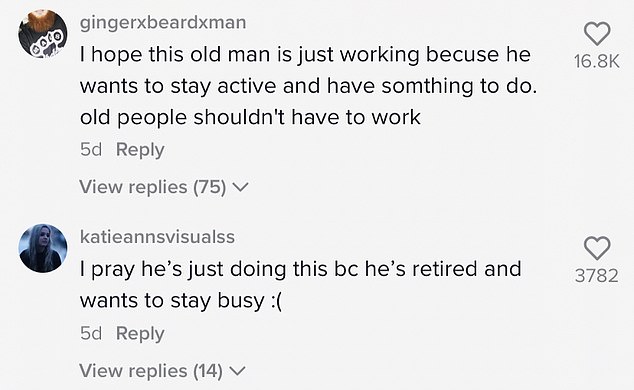 Yet while some viewers have found the story sweet, some seen it as proof that the American economic system is broken

‘Nah cause that’s sad that someone his age has to work at all,’ wrote one commenter.

‘I hope this old man is just working because he wants to stay active and have something to do. Old people shouldn’t have to work,’ said another.

‘He should be enjoying retirement. This makes me so sad,’ wrote one more.

Another chimed in: ‘This made me cry, in a bad way. This country has failed its elderly.

‘We need to do better for our elderly,’ said yet another, while one more said it ‘broke my heart.’