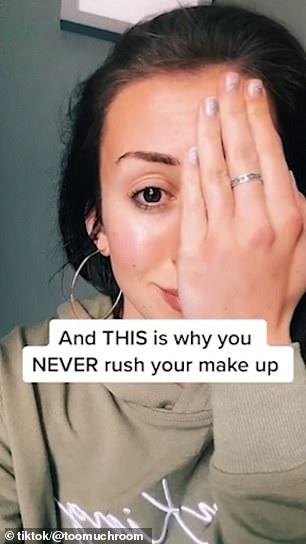 ‘This is why you NEVER rush your make-up’: Woman reveals how she RIPPED OUT her eyelashes with a curler

A woman has warned others not to rush their makeup after accidentally ripping out her eyelashes with an eyelash curler.

TikTok user @roomeyroo urged beauty enthusiasts to take their time when it comes to perfecting their eyelashes.

In her video, the British social media user revealed she’d accidentally yanked out a large portion of her eyelashes.

She showed how she’d been curling her lashes with a curler after applying mascara when nearly all her eyelashes were peeled off by the device.

Sharing the shocking results in her clip, she said: ‘And THIS is why you NEVER rush your make-up… I’m done.’

She captioned her video: ‘They better grow back! The pain. Someone please help me. Advice welcome!’

Beauty fans were horrified by the mishap, with one person writing: ‘When I tell you my jaw dropped! My worst nightmare.’

However, others suggested that you should never try to curl your lashes after putting mascara on, as they can be ripped out.

‘That’s why you don’t curl your lashes with mascara on,’ one person commented, while a second wrote: ‘Never ever use it on top of your mascara, I am so sorry girl.’

But others admitted they always curled their eyelashes before and after mascara and had never had a problem before.

On average, people have 90 to 150 eyelashes on the upper lid and 70 to 80 on the bottom lash line. It can take between five to 11 months for eyelashes to grow back after falling out.