A woman has had strangers compare her to Audrey Hepburn nearly every day, since having her fringe trimmed shorter than usual.

Mia Jones, 23, from Denton, Manchester didn’t notice her uncanny resemblance to the movie legend until her mother Adele, 54, who is a hairdresser, trimmed her fringe shorter than usual at age 16.

She explained that Adele did the style so that the cut would last longer and hadn’t expected that almost overnight people would start to compare her to Audrey Hepburn.

It prompted Mia to fall love with all of the actress’s movies, and inspired her to adopt Audrey’s winged eyeliner and stunning fashion sense. 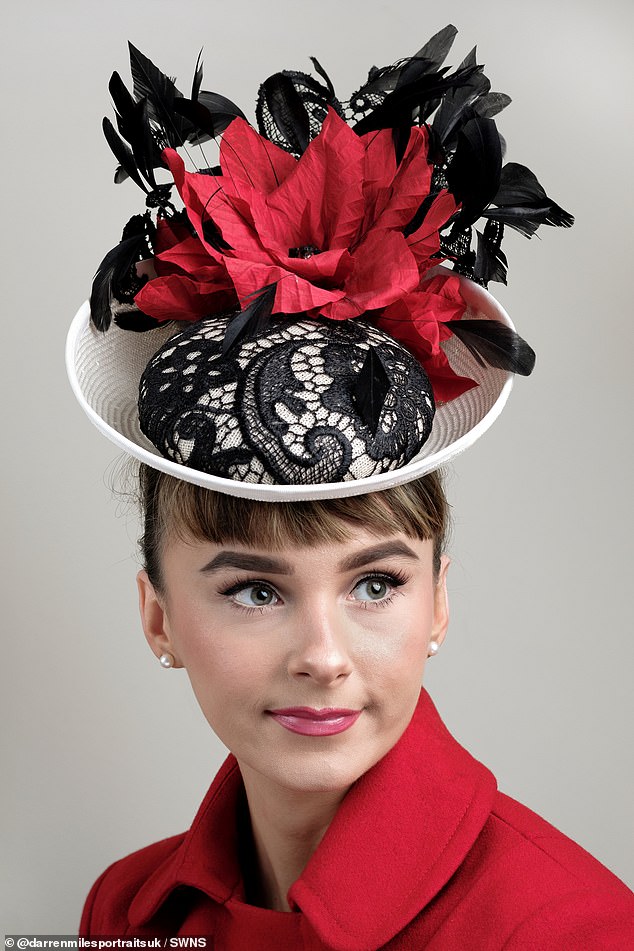 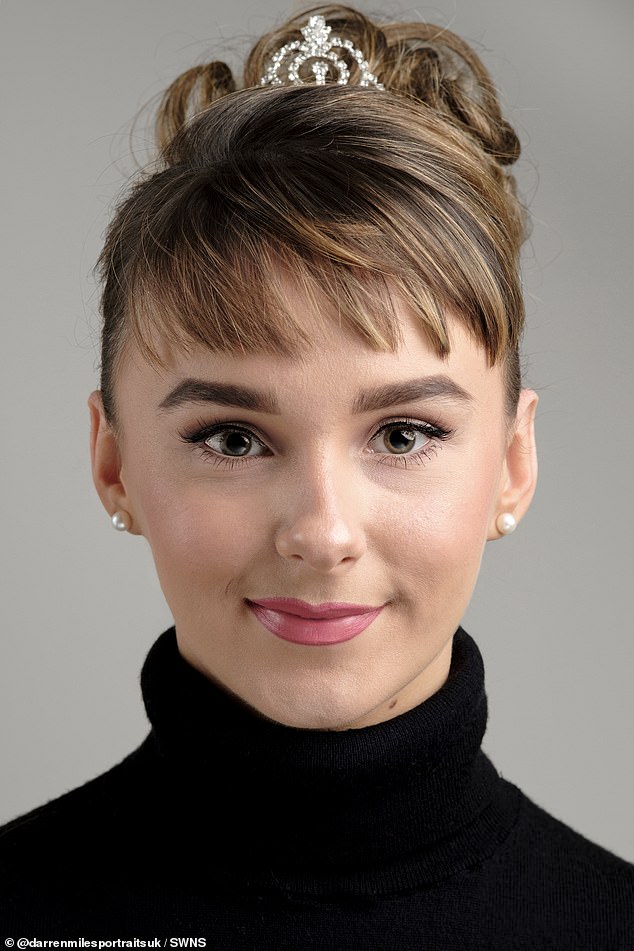 Mia (pictured) said her mother cut her fringe short because as a busy hairdresser, she wanted the style to last longer

After watching Funny Face she decided to study fashion and photography and get a first-class honours degree.

And thanks to her wide doe eyes, dark eyebrows, slim face – and chic fashion sense – Mia is compared to the actress up to four times a week by strangers.

She said she intends to follow in the footsteps of her doppelganger by breaking into the fashion industry professionally.

Mia said: ‘I’ve had a really short fringe from when I was little.

‘My mum is a hairdresser and I always asked her to cut it at eyebrow level but she always cut a bit shorter so she wouldn’t have to do it too often.

‘She was so busy and didn’t want to have to do my hair all the time.

‘I’d watched My Fair Lady when I was younger, because we had the video and it was one of my mum’s favourites. 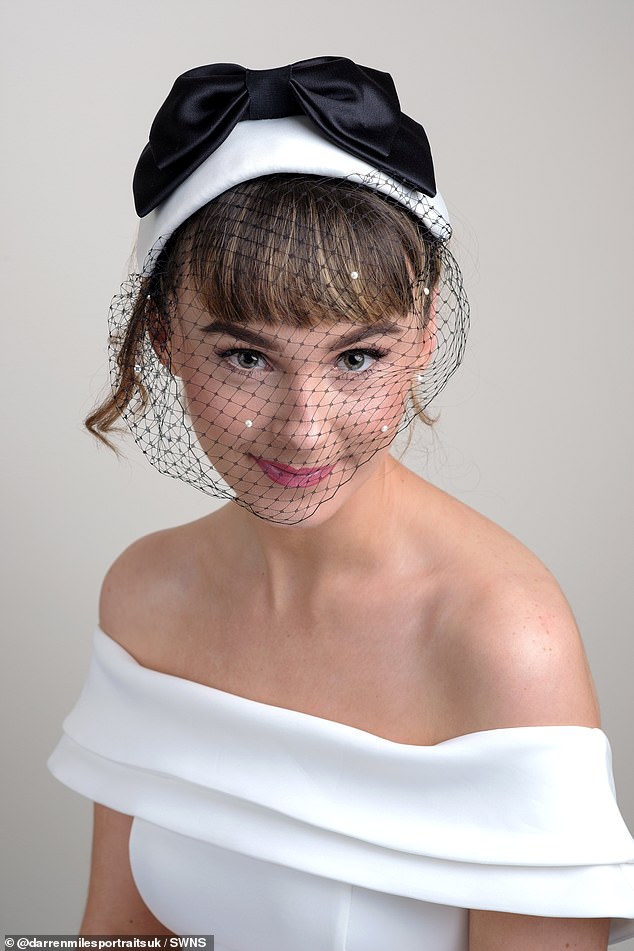 Mia (pictured) who was pleased by the comparisons, said people compare her to Audrey Hepburn a few times a week

‘I didn’t know who Audrey Hepburn was then, but it was one of my favourite films too. 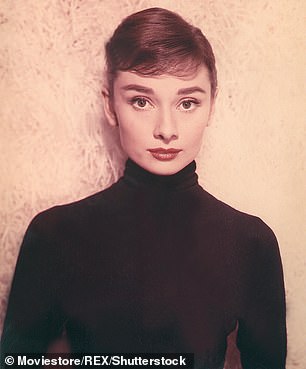 ‘It felt nice when people said I looked like her and I worked out that’s who they meant.

‘Quite a few times a week people would tell me I look like Audrey Hepburn.

‘People at college, friends of my mum and dad, and it even happened in Primark.

‘I think it was because of the Galaxy advert which had a CGI of Audrey Hepburn on it.

‘Lots of people at college said ‘you look like the lady on the Galaxy advert.’ 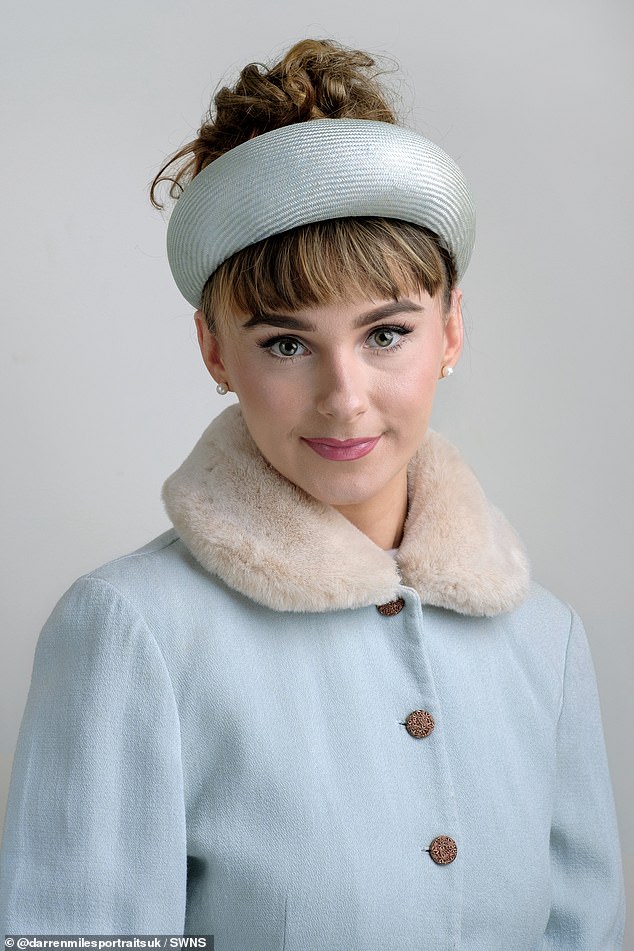 ‘I watched a few of her films and got into the style and make-up and it all came from there.

‘I had been thinking of doing art at uni, and I did a year of an art foundation course, but this inspired me to do fashion.

Friends and strangers started to tell Mia she looked like the iconic movie star when she started college, aged 16. 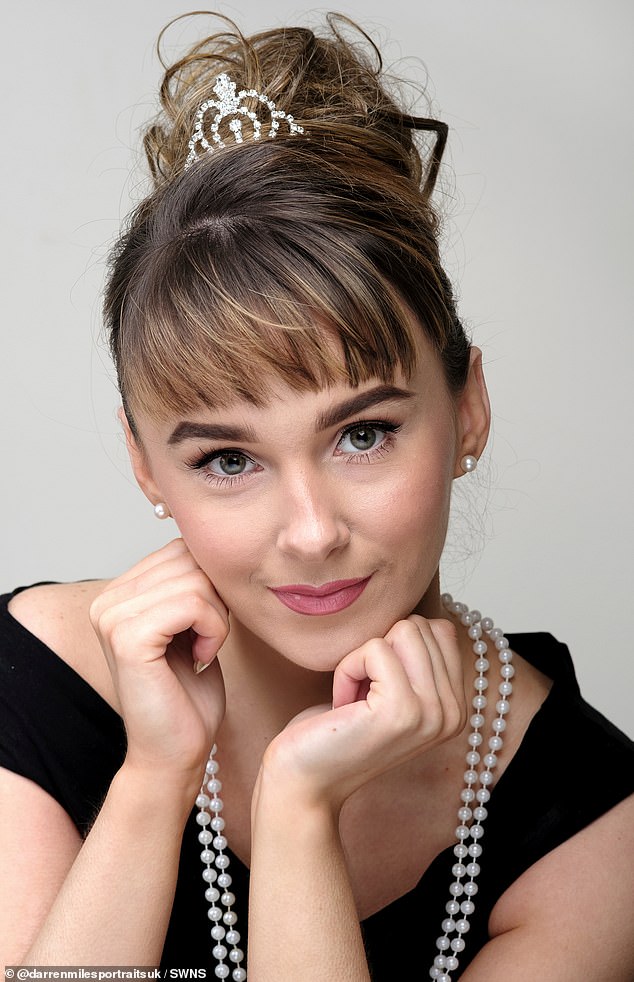 Mia (pictured) who had been planning to study art at university, revealed she was inspired by Audrey Hepburn to study fashion 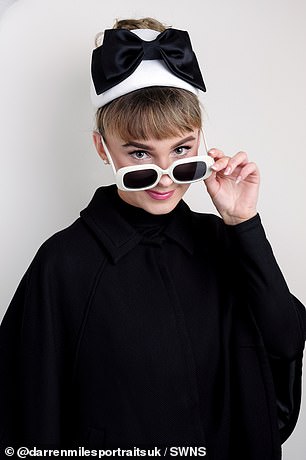 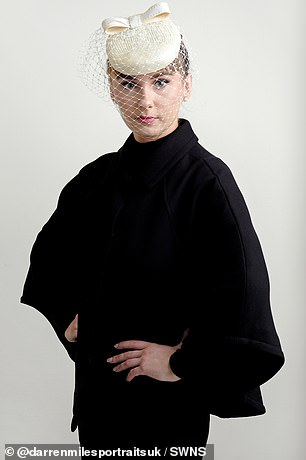 She decided to watch Audrey Hepburn movies to get to know more about her double and found herself mimicking the star’s style.

Blown over by the way Hepburn and Givenchy paired fashion and film, Mia decided to study fashion at university and pursue it as a career.

She went to Stockport College to do a foundation course in art, then went on to Salford University to study fashion, when she was 19, in September 2018.

She said: ‘I think it was when I noticed her collaboration with Givenchy, I wanted to find a career in fashion. 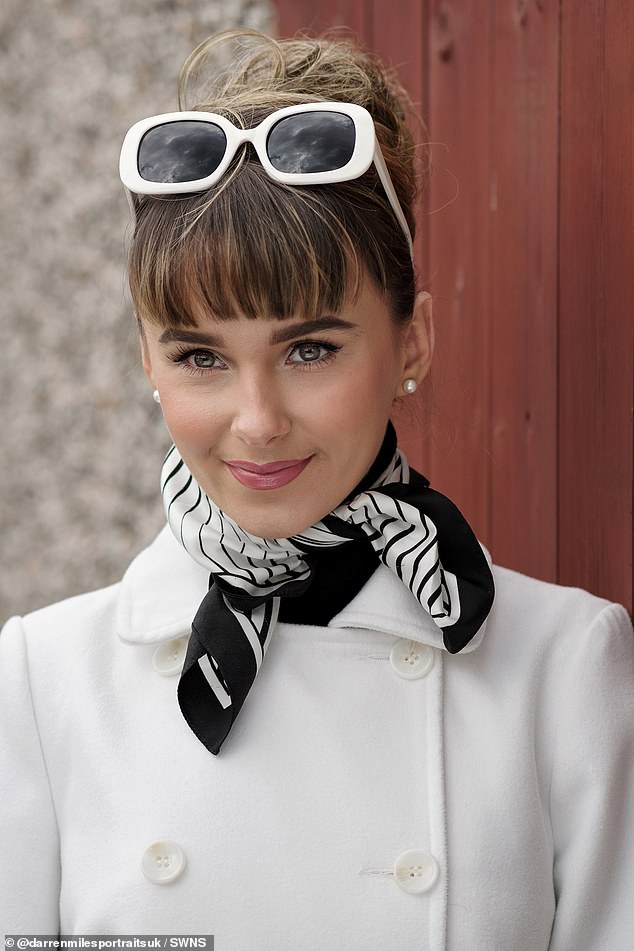 ‘I really loved the way those two brought fashion and screen together.

‘Even if it wasn’t the first time that had happened it was still a big moment for film and fashion.

‘She made the tight-fitting little black dress much more popular than it had been before.

‘I feel like she was a big influencer with that classic sixties style.

‘When I watched the films at 16 or 17 I really started to copy her style.

‘I love the winged eyeliner. 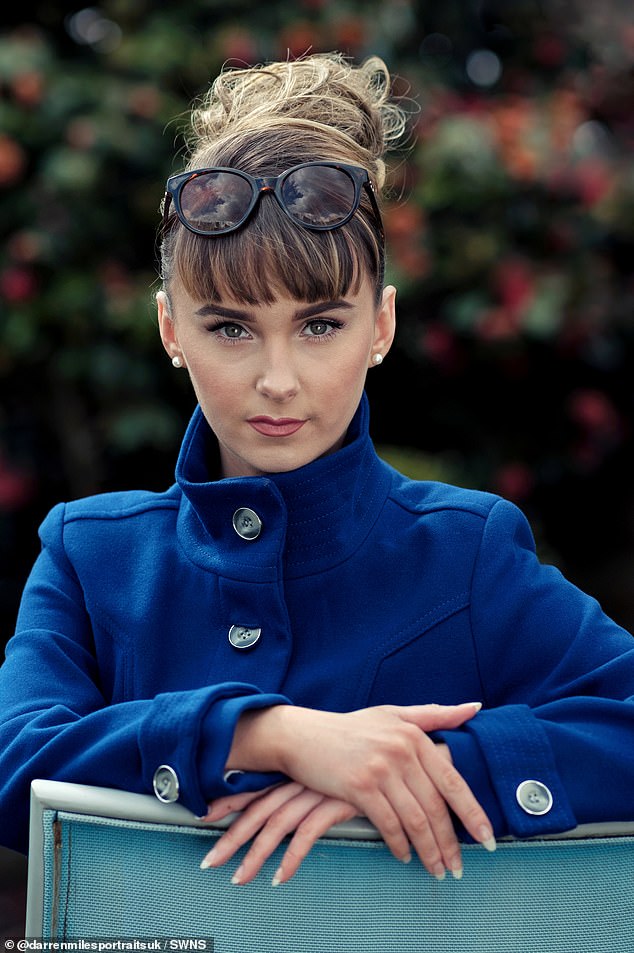 Mia (pictured) said she really liked the classic style Audrey Hepburn wore in the film Sabrina, so she started wearing a lot of it

‘Once I’d copied it it kind of stuck with me.

‘I really like how her everyday style is really laid back and in the films she’s wearing really high end clothes.

There is no in between.’

‘In Sabrina, another of my favourites, she’s in a Givenchy suit and I really liked that classic style, so I started wearing a lot of it.

‘Now I wear more of her casual look because of lockdown.

Mia graduated with a first-class honours degree in fashion, image making, and styling. 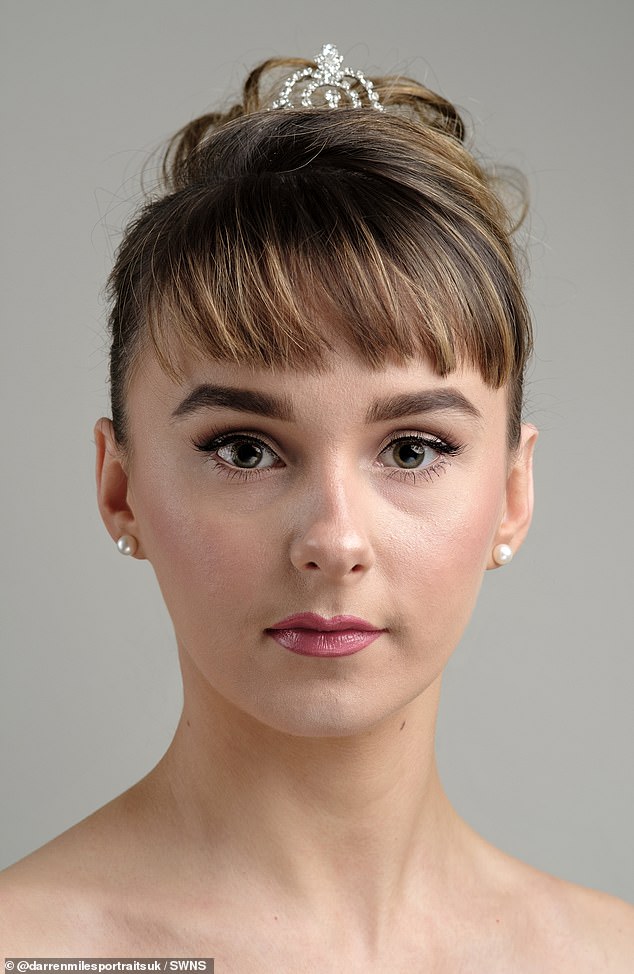 Mia (pictured) said her forehead and eyebrows are similar to Audrey Hepburn, as well as her small features

She is currently working at a golf club, but hopes to get her dream job in fashion when everything opens up again.

Mia described her likeness to Audrey, saying: ‘There’s quite a lot about us that’s similar.

‘I have a big forehead like Audrey does, and my eyebrows are quite thick and straight like hers, and I’ve got quite small features like her.

‘When I watched documentaries about her she seems like she didn’t really like being in the spotlight. 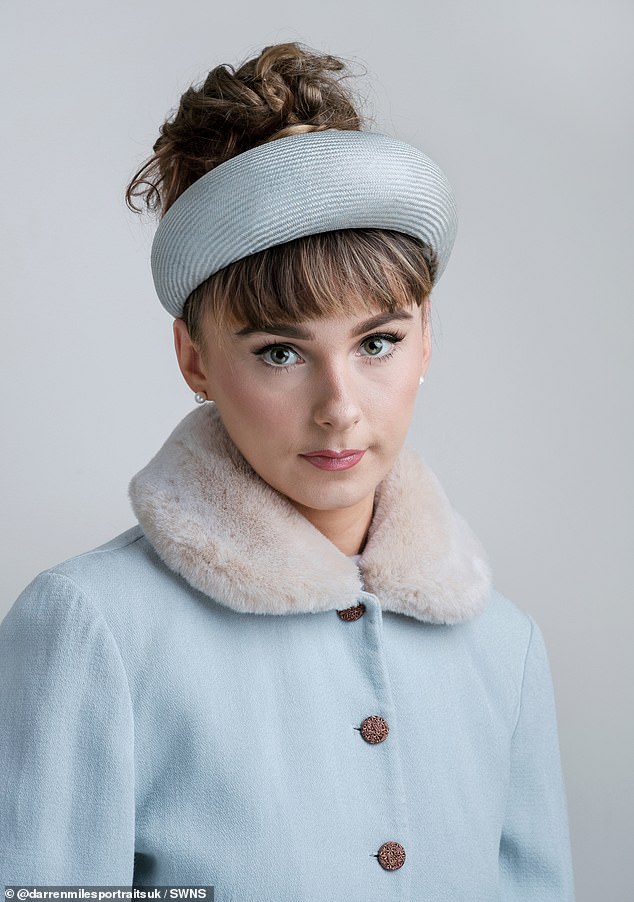 ‘In the documentary she has a lot of insecurities like mine.

‘She had the courage to follow her dreams, she advocated for kindness, and tried to make the World brighter..

‘There are differences too.

‘I’m a few inches shorter than her, plus I’m obsessed with clothes shopping, but I do a lot of charity shop shopping which I’m sure Audrey didn’t do.’ 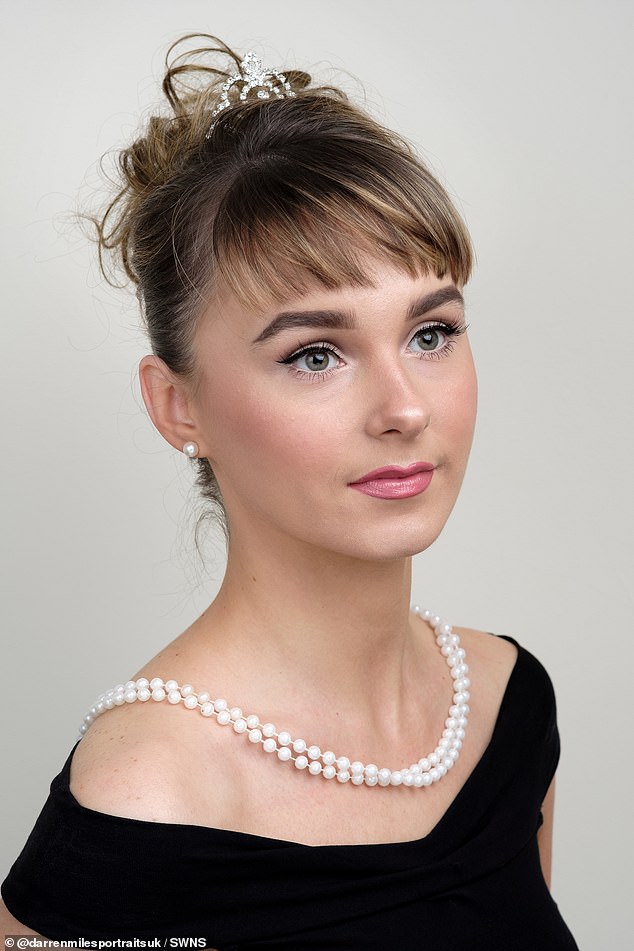 Ex-Formula One chief Max Mosley is dead at 81