A woman whose boyfriend regularly spends time with a close female friend has been urged to end the relationship because their friendship seems inappropriate.

Posting anonymously on Mumsnet, the British woman explained she has given her boyfriend of two years an ultimatum to distance himself from a long-standing female friend.

She said her boyfriend regularly enjoys dinner, drinks and nights out with his female friend who he kissed as a teenager, as well as turning to her for advice whenever they’re going through a rough patch in their relationship.

Many responses to the post argued the woman would be happier if she leaves her boyfriend and said such a close friendship with another woman isn’t something they would stand for.

However, others accused the woman of being jealous and insecure, as they opened up about their own friendships with people of the opposite sex. 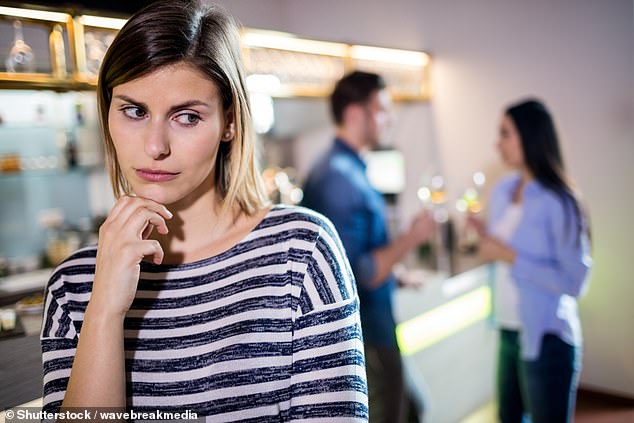 A woman who lives in the UK, has sparked a debate about dating someone who has a close friendship with someone of the opposite sex (stock image)

Asking for advice, the woman explained that when she met her partner, he straight away told her about his female best friend, revealing their closeness had caused issued in his last relationship.

‘He told me that he uses this friend as a confidante. She is the only one he can really be himself around without judgement, they go out for dinner, drinks, nights out. They also kissed on an occasion when they were teenagers. He wanted to know my thoughts as his ex had not liked this friendship and it was one of the contributing factors for them splitting up.’

The woman said she was ‘honest’ and explained that like ‘most women’ she wasn’t overly comfortable with the idea, and could understand his ex’s point of view.

‘He said he understood my position and was happy to adapt this friendship into something that wouldn’t cause anymore issues for him. Fine,’ she added.

The woman explained that as their relationship developed, she began to notice how the friendship would impact their time together.

She continued: ‘There have been a couple of instances now relating to this friend. In the first instance, they went for dinner one evening, he never told me about it and I found out much later down the line. This caused an argument as I felt he had lied in the first instance by pretending to be happy to adapt his friendship, and also indirectly lied by not telling me about it.

‘Every time we go through a difficult patch this ‘friend’ seems to appear in a big way. After we had an argument about something unrelated he went on a night out with her after work, then booked tickets for them to go to a concert the following weekend together.

Recently, we split up and within two weeks he had booked a holiday abroad for the two of them to be away for four nights together, staying in separate rooms in an apartment. She posted photos of their holiday all over her social media accounts, knowing full well I, our friends/family and everyone else would see them. 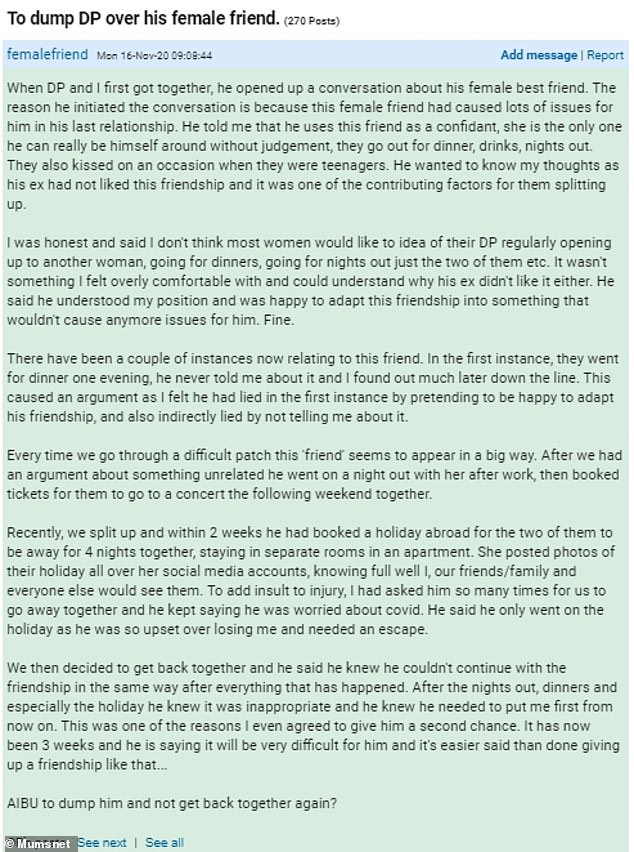 Taking to Mumsnet, the woman explained her boyfriend regularly enjoys dinner, drinks and nights out with his close female friend who he kissed as a teenager

‘To add insult to injury, I had asked him so many times for us to go away together and he kept saying he was worried about Covid. He said he only went on the holiday as he was so upset over losing me and needed an escape.’

The woman explained that despite their relationship previously breaking down because of her boyfriend’s friendship with another woman, he’s reluctant to make any changes.

She continued: ‘We then decided to get back together and he said he knew he couldn’t continue with the friendship in the same way after everything that has happened.

‘After the nights out, dinners and especially the holiday he knew it was inappropriate and he knew he needed to put me first from now on. This was one of the reasons I even agreed to give him a second chance. It has now been three weeks and he is saying it will be very difficult for him and it’s easier said than done giving up a friendship like that… AIBU to dump him and not get back together again?’

A stream of responses to the post urged the woman to end the relationship, arguing her boyfriend should priorities her instead of his friend.

One person wrote: ‘Sorry, but no way would I put up with this. You’ll always be the third wheel in the relationship. She is the only one he can open up to and who can understand him? That should be you. The only thing he doesn’t get from her is sex. That’s what you are there for.’

‘I’d bin him off – the friendship is less an issue than his lying about seeing her. And the holiday, when he wouldn’t go away with you – rude, hypocritical and a red flag. Get rid,’ another penned.

Others argued it’s unfair for the woman to dictate her boyfriend’s friendships and accused her of putting him in a ‘difficult’ position.

One person said: ‘You can’t change who you are. You’re jealous and insecure because she’s female. If it was a bloke your reaction would not be like this. Yes, I think you need to end it. It is not right to dictate he can’t have friends of the opposite sex.’

‘You can’t dictate who your partner is friends with and making them “tone down” or discard a friendship is isolating and abusive. You knew he had a best friend going into the relationship.

‘If you couldn’t handle that you should have found someone friendless. But even then they are perfectly entitled to make a friend once they start a relationship with you,’ another wrote.

A third added: ‘As others said, you either trust him or you don’t. If you don’t then end it and let him find someone who does. I don’t think he has behaved badly and feel you have put him in a difficult position. Saying that, if you feel being able to dictate who your partner speaks to and about is what you think you should be able to do, then I wish you luck on your search.’

Experian says its pre-tax profit slid to £345.46 million in the fiscal first half.