A woman who earns significantly less than her husband has vented her frustration that he expects them to split expenses equally.

Posting anonymously on Reddit, the American woman explained her husband has a salary that’s $100,000 higher than her income and is set to inherit millions, but still wants bills and luxuries to be split 50/50.

She said her husband declined her suggestion that he contributes 80 per cent and she contributes 20 per cent, because he worked hard to achieve his financial status.

Responses to the post were divided with many arguing that everything should be equally shared in marriage, while others said her husband shouldn’t be punished for earning more. 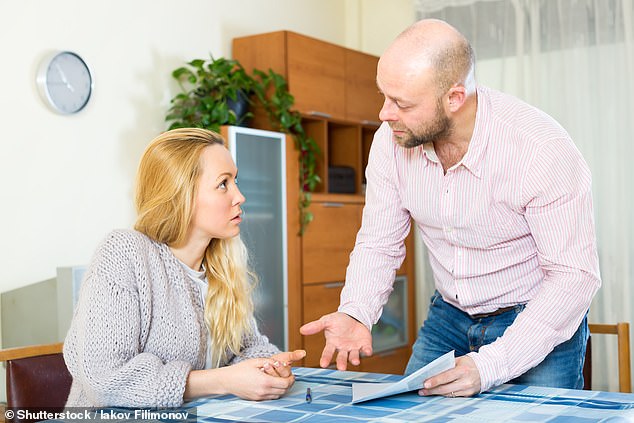 An anonymous American woman has sparked a debate about splitting expenses in relationships, as she reveals her husband wants to split bills equally although he earns significantly more (file image)

Venting her frustrations, the woman wrote: ‘We both earn good salaries in the same industry. He’s been working full time about 10 years longer than I had (grad school) and makes about $100,000 more than I do because he’s more senior at the company.

‘We split all vacations, rent, dinners out, groceries about 50/50. We spend the same amount on each other for holidays, etc. I took pride in it because he complained carrying extra weight for his ex who made way less than him took a toll on him, and I felt proud I could provide more to shared expenses.

‘However recently I proposed splitting bills by %. So for example, if we combine incomes and his makes up 80 per cent he covers 80 per cent of expenses and I cover 20 per cent. He said this would be unfair because he busted his butt to get his high salary over many years and why should he be punished for making more?

‘He says he made sacrifices to save and get to this income level (even before we were together), and he and also doesn’t think it’s fair he should have to contribute more than me because I made my choices to go to grad school and I would be earning more if I didn’t.

‘He stands to inherit millions while I will inherit nothing so I want to save more for my own financial security and peace of mind. I have decent savings (no debt) but still feel this would be more fair. He says it’s all “our money” anyways, so why does it matter if it’s in his account or my account – I asked him the same thing? So Reddit what’s fair?’ 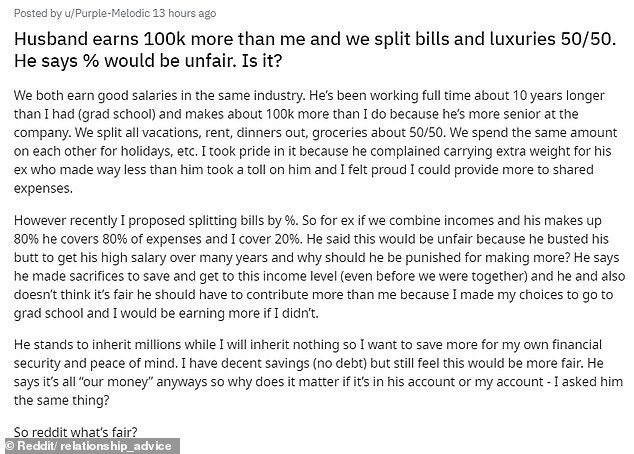 The woman explained her husband’s salaries is $100,000 higher than her income and he’s set to inherit millions

A stream of responses to the post agreed the husband should contribute more to cover their expenses.

‘The problem with the 50/50 approach is that you never view yourselves as a family (or team) – you’re always individuals,’ one said.

‘For example: if my husband has a job offer in another city where he would earn $50k more and I could only get a job there earning $15k less, I’d be happy to move because it’s better for the family as a whole. If you had the same situation what would you do? You’d have to split up,’ wrote one.

Another said: ‘You’re married, it shouldn’t be split percentages. You own the home I assume and live in it same amount of time as a married couple? To each their own but this is bizarre. I’d never agree to that. For context, I make more than my partner and I’m going to grad school. If/when we marry we will combine our income.’ 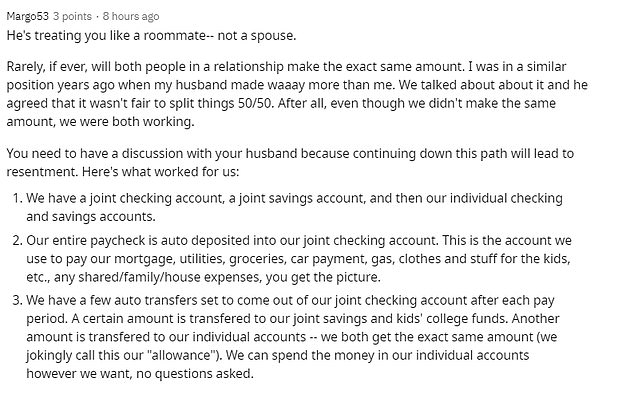 Others argued it’s unfair for the woman to pay less just because she doesn’t earn as much as her husband.

One person wrote: ‘He is right, it is your choice to go to grad school. Keeping tabs in relationships is a funny concept to me. But then what do I know’

Another said: ’50/50 sounds like a fair split. Just because he makes more doesn’t make you entitled to pay less. If you want your common spending to be less impactful to your budget – you need to earn more.’

Suggesting compromise, a third added: ‘I’d sit him down, tell him that I don’t think it’s right that I have to pay as much as you without the same wages and see what compromise we’d come up with.

‘If he’s making 100k more than you, I think he’d be able to pay a little more in bills. I wouldn’t push for the whole 80-20 per cent, but maybe 40- 60 per cent or something like that. Tell him that you’re trying to secure a good savings account and need to have the extra wiggle room for that.’

Others argued the couple should make compromises, but an 80-20 per cent split isn’t fair