A young woman who lost her legs and fingers to meningococcal has showed off her amazing recovery as she smashes her fitness goals.

Juttima Chinnasri, 30, spent ten days in an induced coma fighting for her life after suddenly falling ill with the disease in October 2018.

Although doctor’s miraculously managed to save the Sydney woman, blood poisoning turned her legs, feet and fingers black and they could not be spared.

Just over two years on, the survivor has a new lease on life – and is living it to the fullest – as she learns to adjust to everyday activities with her new prosthetic limbs. 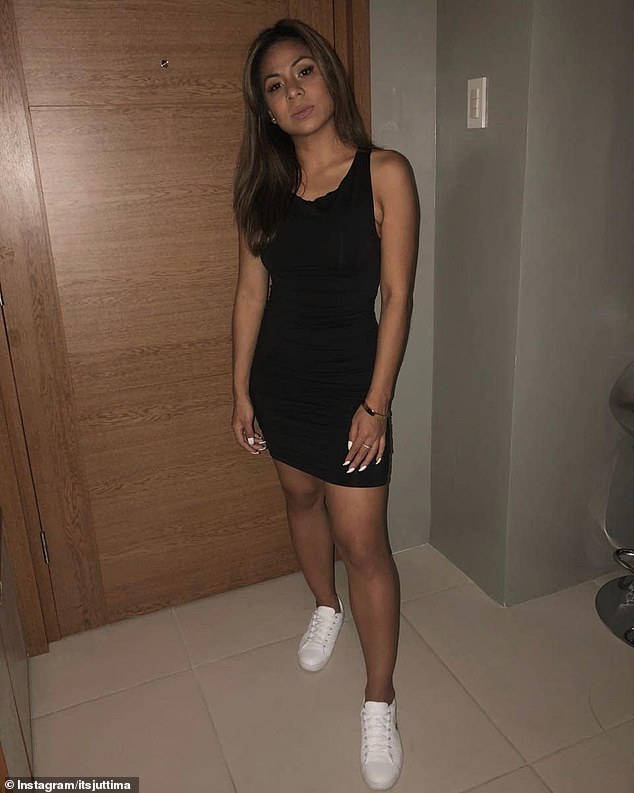 Juttima Chinnasri, 30, (pictured in July, 2018) went to bed one night in October 2018 with flu symptoms and woke up the next morning covered in a deadly rash

After months of grueling physiotherapy, she is now jumping and has begun rock climbing with her new legs.

‘Only amputees would know how much work (physical + mental) has gone into this,’ she wrote alongside a clip of her jumping in a session last month.

‘I couldn’t be happier with my progress.’

While leaping in her prosthetics has hurt in the past, Ms Chinnasri told fans the exercise has become more comfortable after having new prosthetics fitted. 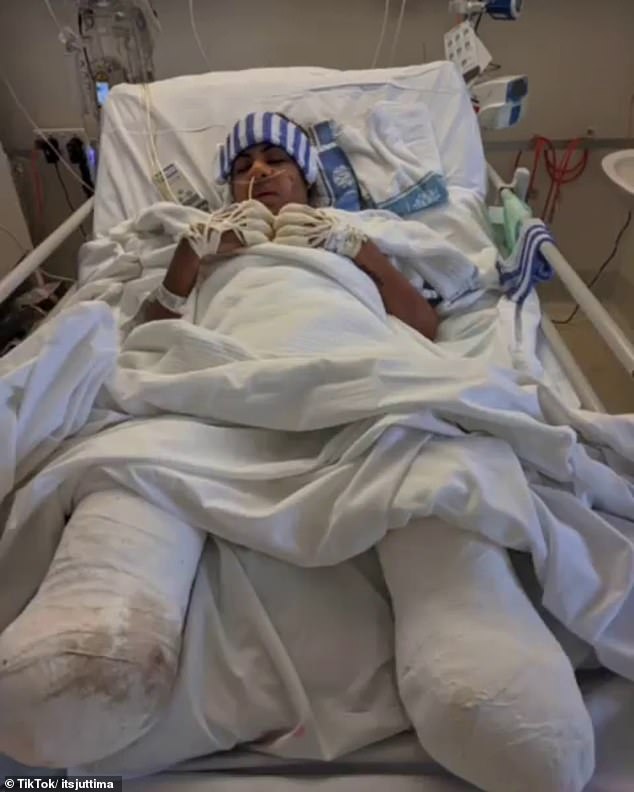 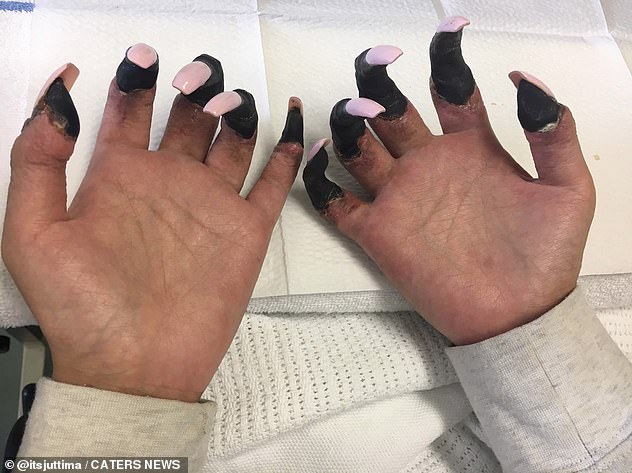 The deadly bacteria gave her blood poisoning, which turned her fingers and legs black

‘It doesn’t hurt as much as before because my new legs are fitting pretty good and they also have ankles which help me absorb the impact from the jump,’ she said in another video.

‘The only time it will hurt is if the stump has lost the volume throughout the day and the prosthetic legs becomes loose and the stump can roll around in the socket and it hurts if I land wrong.

‘Sometimes I get phantom pain, but it is mainly pretty good.’

Ms Chinnasri’s life-changing experience began one night in October 2018, when she went to bed early concerned that her high fever was a sign on an oncoming flu.

The next morning she woke covered in blotchy, dark rashes and was rushed to St George Hospital where doctors confirmed she had meningococcal B – and the deadly bacteria had seeped throughout her system, poisoning her blood. 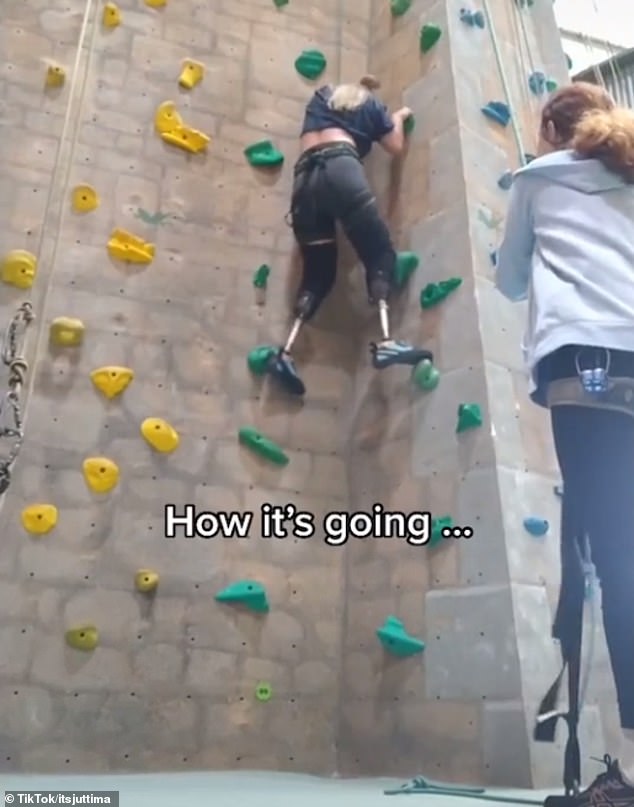 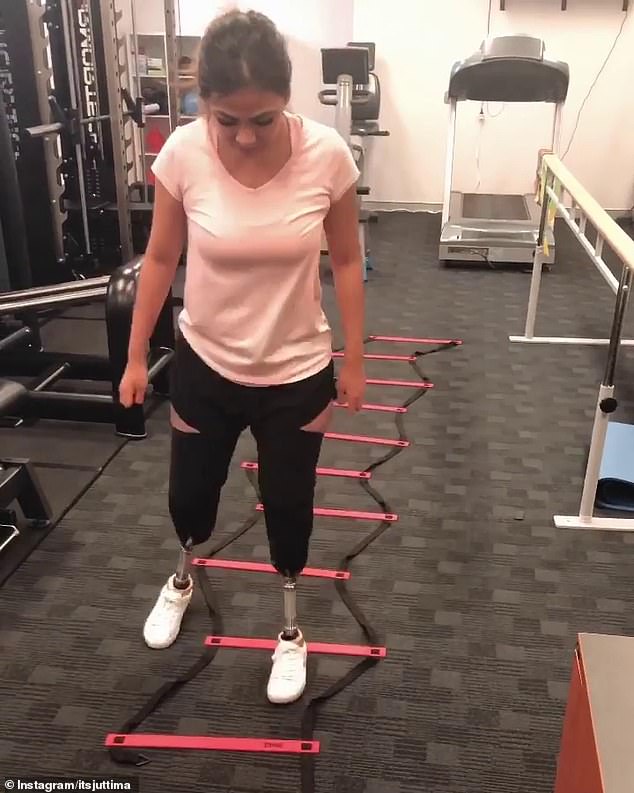 The survivor has now exceeded major rehabilitation milestones, and is jumping (pictured) with her prosthetic legs

For the following ten days, while in an induced coma, her family waited nervously as hospital staff desperately tried to save her life.

Her blackened limbs were amputated, leaving her wheelchair bound and in hospital for three months as she learned to adjust to life without them.

After leaving hospital, she moved into her parents’ Kogarah home while she learned how to walk again.

Grateful to have survived, Ms Chinnasri frequently shares uplifting posts about her journey to help inspires to make the most out of life.

In December, she posted a video revealing how her life has changed for the better since her ordeal, and how she is back working on her fashion business, Dolled Up, to help other women feel beautiful. 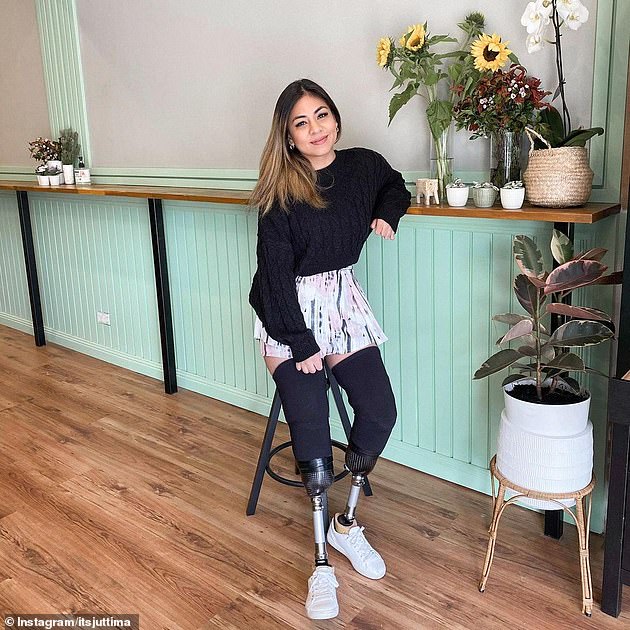 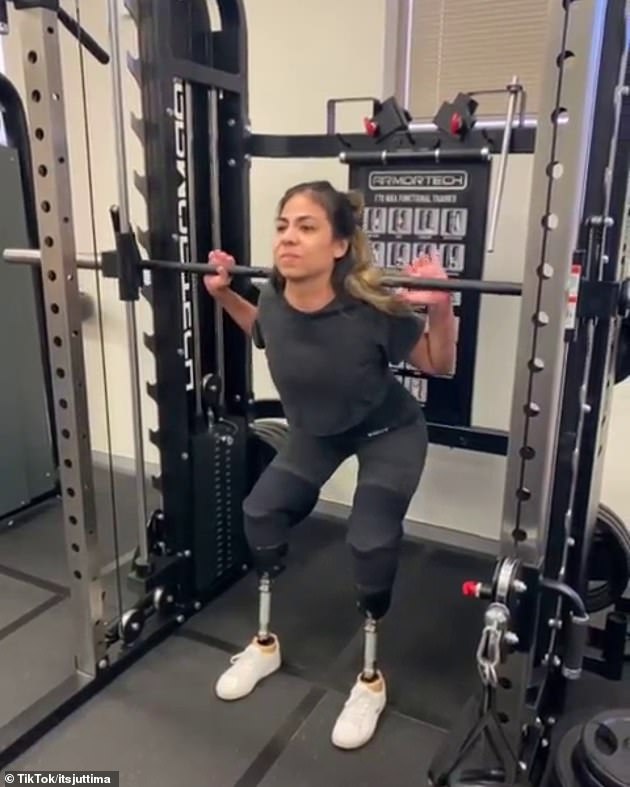 Ms Chinnasri moved back into her parents’ Kogarah home after leaving hospital while she relearns how to walk. She is pictured at physiotherapy

Next to a photo of her with her ex-boyfriend, she wrote: ‘Me before 2018, in my longest relationship of five plus years, but I was insecure and had zero self love.’

The slideshow then progressed through a series of images of her in hospital with bandages covering her wounds, before showing her in more recent times returning to normal activities with her prosthetic legs.

One shot shows her walking along the beach, while in another she is doing squats at a gym. A third photo shows her busy unpacking boxes of clothes for her business.

‘This is me after a life changing experience and me back to focusing on myself,’ she wrote alongside the pictures.

‘Now I have unlimited self love and I am the strongest I have ever been.’

WHAT IS MENINGOCOCCAL DISEASE?

Meningococcal disease is a bacterial infection that can cause death within hours if not recognised and treated in time.

There are five main strains of the infection, each of which now have a vaccine available in Australia.

Although the majority of victims will recover fully, 10% of those infected will die, and around 20% will have permanent disabilities.

If left untreated, the disease is fatal.

Amputation is not uncommon. Neither is organ failure and kidney damage, with extreme cases requiring long-term dialysis.

Babies and children up to five-years-old account for two-thirds of cases due to their less mature immune system.

The Tunisian President: The solution to the cabinet reshuffle crisis can only be found in the constitutional text