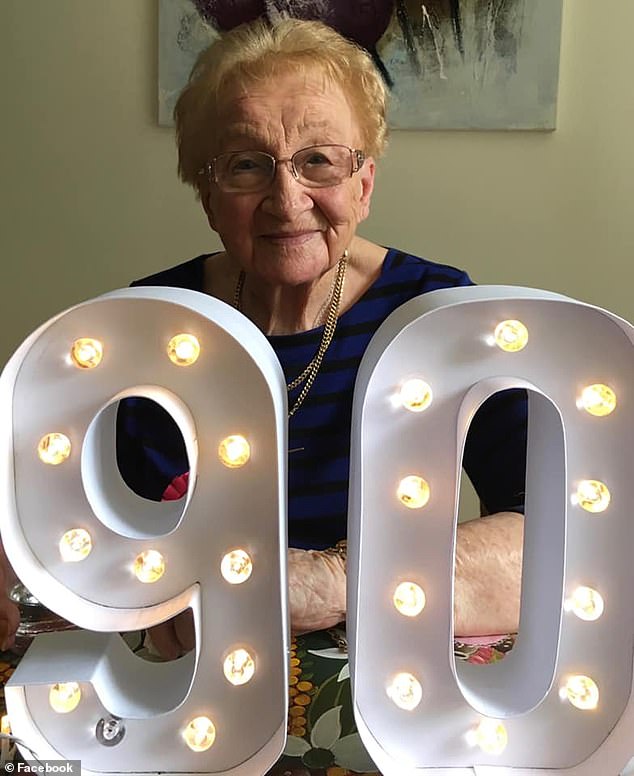 Two feuding sisters who waged a court battle over whether their mother should be given a funeral will have their $54,342 in legal costs paid out of her estate.

The body of 93-year-old Betty Batson was left lying in a mortuary for three weeks because her children could not agree on what style of service she had wanted.

After a court case brought by one of her daughters the much-loved great-grandmother was finally cremated by order of the New South Wales Court on Christmas Eve.

Only eight mourners attended the service at which no singing was allowed and no family members were permitted to speak.

Much-loved great-grandmother Betty Batson’s body was left in a mortuary for three weeks because her children could not agree on what style of farewell she should receive. Mrs Batson is pictured on her 90th birthday

Mrs Batson’s wish to be cremated had not been carried out sooner because of a dispute between her two executors, daughters Jenise McCredie and Karen Batson. Mrs McMcredie is pictured with her husband Bruce

Mrs Batson’s daughter Karen Batson (pictured) believed her mother wanted to be cremated without a funeral. She did not attend the service a judge ordered to be held on Christmas Eve

Mrs Batson’s daughters Jenise McCredie and Karen Batson then had another court dispute in which they each tried to have the other pick up their huge legal bills.

Justice Michael Slattery noted on Thursday a ‘degree of persistent acrimony between sisters that is difficult to comprehend as an objective observer.’

The case highlighted the responsibilities of executors of estates and turned on what actually constituted a funeral.

Mrs McCredie thought her mother should have a proper send-off surrounding by family while Ms Batson believed she had wanted to be cremated simply.

Both were executors of their mother’s estate and when they could not agree Mrs McCredie took Ms Batson took court.

Justice Slattery said the only reason he had not dismissed them both from their roles as executors was because there was not time to replace them.

Mrs Credie was broadly supported by brother David Jasper-Batson, while Ms Batson had the backing of siblings Peter Jasper-Batson and Marilyn Johnston.

Some of the acrimony among the siblings could be traced back to the death of their father Douglas in July 2011 and the organisation of his cremation, which was conducted by White Lady Funerals.

‘Several family members gave evidence that [Msr McCredie] took too much control of his funeral and it was not conducted in accordance with the wishes of Betty Batson,’ Justice Slattery found in December.

‘That led to the deceased not wanting her funeral to be controlled in the same way as her husband’s funeral had been.’

Mrs Batson had formed a ‘firm conviction’ that she did not want an elaborate funeral but rather a private cremation that only her family would attend.

‘She appears to have thought that his would reduce family tension,’ Justice Slattery found. ‘But what has emerged instead is a contest about what her wishes were for the disposal of her body after death.’

One of Jenise McCredie’s sons posted a moving tribute to his grandmother on Facebook on Christmas Day. It has been edited for legal reasons:

‘A sad day for today which marks the the 1st Christmas Day without Grandma with us,’ he wrote.

‘Grandma, I hope you understand how hard we fought for you, it was the very least we could do.

‘I hope you are looking down on us now… you taught us well Grandma. Rest In Peace now Grandma, we love you very much.’

All five children agreed they would like to grant their mother’s wishes that she be cremated without any religious ceremony.

They also agreed their mother’s preference was for ‘something modest and straightforward and that she did not want anything “showy”,’ Justice Slattery said.

However, the siblings could not even agree on who should conduct the funeral.

Ms Batson believed her mother wanted the cremation to be organised in what Justice Slattey described as a ‘very bare’ fashion by Simplicity Funerals.

‘She had not considered how other people attending the cremation might need to be supported in their grieving in an inclusive atmosphere and where family conflict was minimised,’ he said.

Mrs McCredie wanted a service conducted by the more expensive White Lady Funerals, whose all-female staff are known for their burgundy brimmed hats.

Justice Slattery accepted Mrs McCredie’s evidence that her mother had described her husband’s funeral as ‘a really lovely service’ and she would like ‘something similar with White Lady Funerals.’

Some of the acrimony among the siblings could be traced back to the death of their father Douglas in July 2011 and the organisation of his cremation, which was conducted by White Lady Funerals

Peter Jasper-Batson had given evidence saying his mother did not want a ‘conventional funeral’, but Mrs McCredie’s husband Bruce said his mother-in-law wanted a ‘small private funeral with the family.’

Justice Slattery accepted Mrs Batson was ‘quite competent’ when in September this year she made a statutory declaration confirming ‘I do not wish for a funeral service to be carried out on my passing.’

What does the law say about burial rights?

An executor of an estate has the right to arrange for the burial or cremation of a deceased person’s body.

A deceased person has no right to dictate what will happen to his or her body.

A court may take into consideration the deceased’s wishes on the subject.

A person with the privilege of choosing how to bury or cremate a body is expected to consult with other stakeholders about the process but is not legally bound to do so.

The holder of a right of burial or cremation cannot use his or her power to stop friends and relatives of the deceased expressing their affection in a ‘reasonable and appropriate manner’ such as by placing flowers on a grave.

‘That clearly meant she did not want a conventional funeral like the one for her husband,’ he found. ‘But what does it mean positively?

‘The court finds, from a range of conflicting evidence, that all she wanted was something simple framed around her cremation.

‘She certainly did not want to compel family members who had not visited her in her final years to be present.

‘But nothing in the evidence suggests that she was prepared to take positive steps to exclude them from a purely family cremation service.

‘The court concludes that a modest but dignified family gathering constructed around her cremation was what she wanted.’

Justice Slattery ordered Mrs Batson’s remains be cremated on Christmas Eve and that the service not be advertised in any media.

Only relatives and Mrs Batson’s hairdresser could be invited to attend the cremation which would be conducted by a ‘senior officer’ from White Lady Funerals.

That officer had to ask each of the five siblings for ‘concise information and reflections about the deceased’ to be delivered by her at the service.

Neither Mrs McCredie nor Ms Batson was allowed to give a eulogy and neither was permitted to instruct anyone else to speak on their behalf at the service.

‘It is quite evident from the existing conflict within this family that if any one family member were to speak at the funeral that that may cause aggravation and resentment to other family members,’ Justice Slattery ruled.

Justice Slattery ordered the service be conducted by White Lady due to Mrs Batson’s stated preference and because that operator would have greater resources than Simplicity Funerals.

The matter was back in court on Thursday when Mrs McCredie and Ms Batson claimed victory in the original case, a proposition with which Justice Slattery disagreed.

Jenise McCredie, who wanted a small funeral for her mother, took Karen Batson, who wanted no more than a cremation, to the New South Wales Supreme Court (pictured)

‘I do not think that it is correct to characterise the proceedings as a win for either side,’ he said.

Mrs McCredie contended she had substantially won because Justice Slattery found a small service was appropriate and it should be conducted by White Lady Funerals.

Ms Batson believed she should not have to pay her costs because Ms McCredie had originally brought an unsuccessful action to have her removed as executor.

Justice Slattery said Mrs Batson’s wishes were not completely clear, and ‘both sides were able to point to proven evidence that justified the position they took.’

‘Ms McCredie and Ms Batson simply failed in their fundamental duty as executors to reach a compromise [in a case] that really cried out for compromise.’

Justice Slattery asked the lawyers if the service had been conducted in ‘harmony’.

Barrister Ashley Crossland, for Mrs McCredie, said there was ‘some disagreement’ about ‘some arrangements’, but ‘the funeral was conducted in order with Your Honour’s directions.’

Mrs McCredie, her husband, sons, grandchildren and brother David were the only mourners who attended.

Regarding the eulogy, Mr Crossland agreed it had been appropriate for neither Ms McCredie nor Ms Batson to speak.

‘Your Honour correctly observed that it might end in tears – and not the correct sort,’ he said.

Justice Slattery ordered the combined $54,342 in legal costs come out of Mrs Batson’s estate, with the exception of son David’s share as he did not take part in the court proceedings.

That order came on what would have been Mrs Batson’s 94th birthday.

All five children agreed they would like to grant their mother’s wishes that she be cremated without any religious ceremony and her ashes interred with those of her husband Douglas. Stock image

Microsoft: The SolarWinds attack was the largest hacker attack the world had seen