Not everyone likes a bad boy! Women share texts that show the VERY nasty ways ‘nice guys’ have turned on them after being rejected

While rejection is often said to be a part of life, it seems not everyone is able to take it on the chin.

Women from across the globe have shared messages from senders who ‘claimed to be ‘nice guys’ – only to quickly turn nasty within a matter of seconds.

Amongst the exchanges, which have been collated in a gallery by Bored Panda, include one man who switched from calling a woman ‘beautiful’ to a ‘b****’ after she failed to immediately respond.

Elsewhere, another man threatened to ban one woman from every bar in the city after she said she didn’t want to see him again. 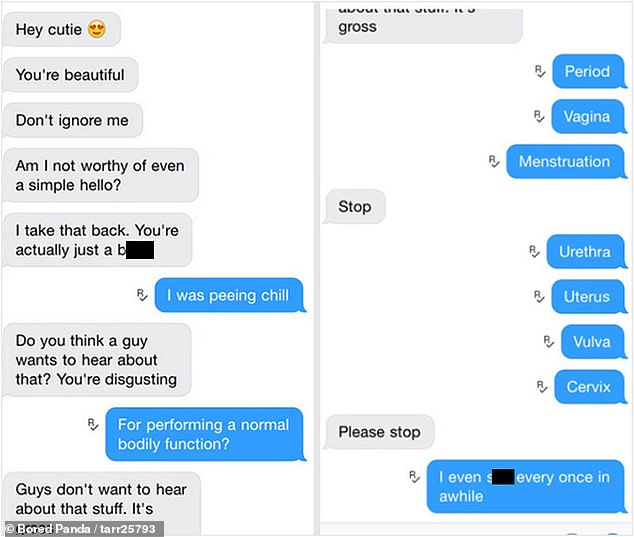 Women from across the globe have shared their exchanges with supposed ‘nice guys,’ who turned nasty after they didn’t get their own way. Pictured: One person, from the US, told how she was called ‘beautiful’ and a ‘b****’ within a matter of minutes

One man, from the US, lost his temper with a woman for responding to him – even though he initiated a conversation

Another woman, from the US, had the last when she told a man she’d rather eat guacamole than have sex with him

This woman, believed to be from the US, received countless irrational messages from a potential date after she rejected him following an inappropriate joke 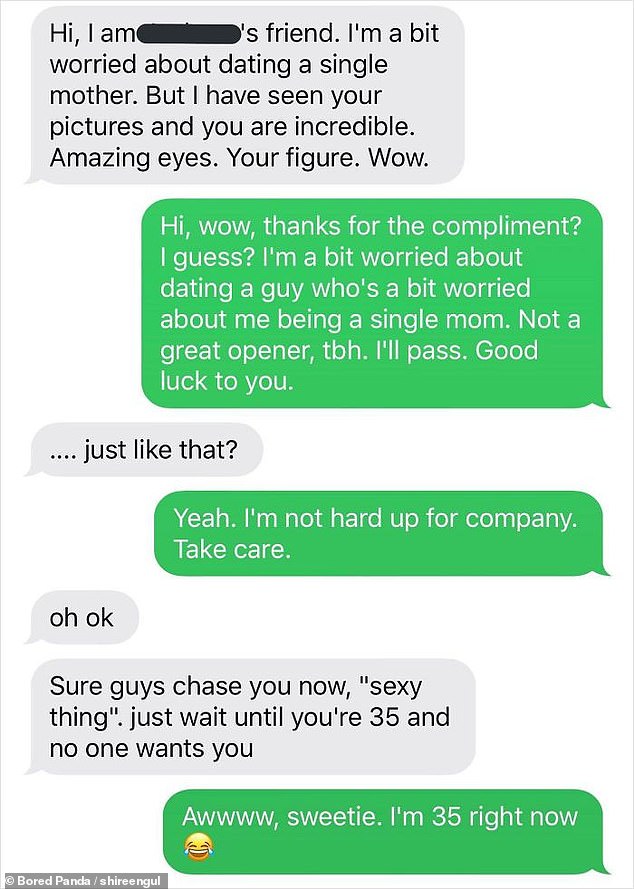 A woman, believed to be from the US, shared this text exchange with a man who tried to insult her – but she had the last laugh

One man, from an unknown location, who accused a woman of ‘leading him on’ for talking to him when she had a boyfriend, turned abusive when she shared their conversation on Facebook 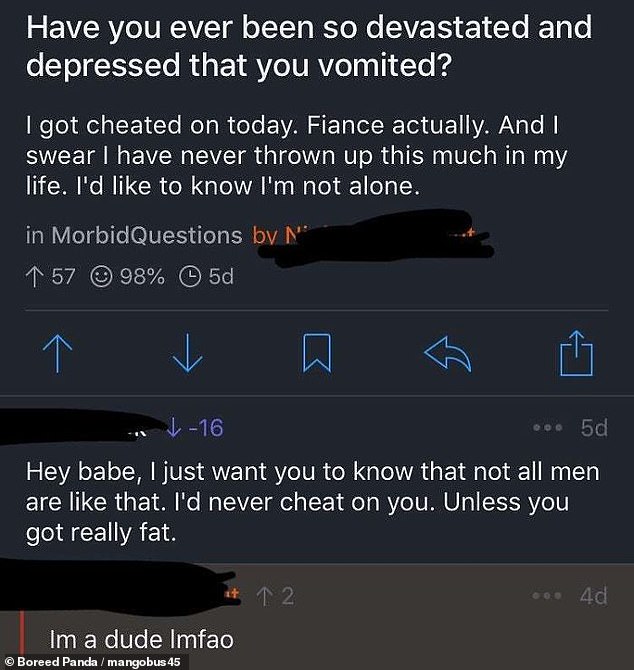 One ‘nice guy,’ from an unknown location, who was trying to crack on with a person he thought was a girl was shocked to find he was actually talking to a man

One person, from the US, revealed another man asked him to break up with his girlfriend because he was an ‘alpha male’ 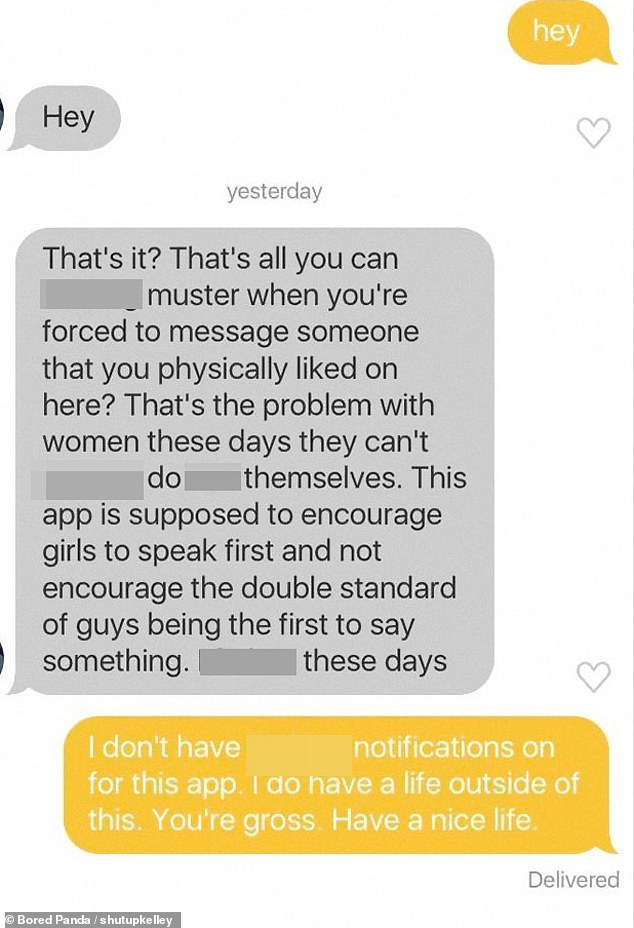 One woman, from the US, said she was put off a dating app after she received this abusive message from another user 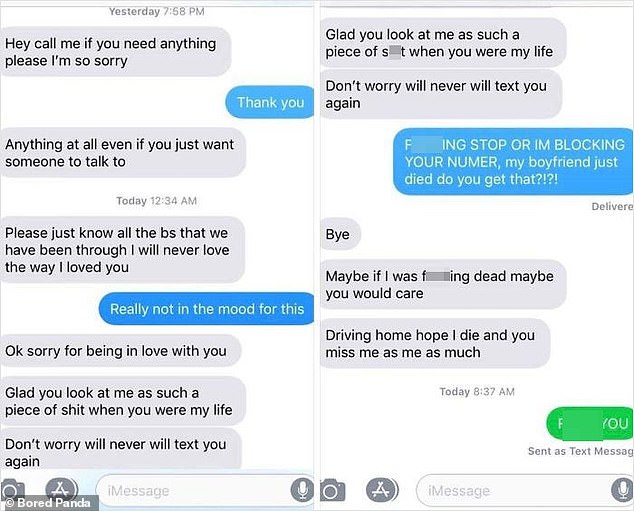 This man, from an unknown location, bombarded a woman with texts after her boyfriend passed away and tried to guilt-trip her for not replying to him 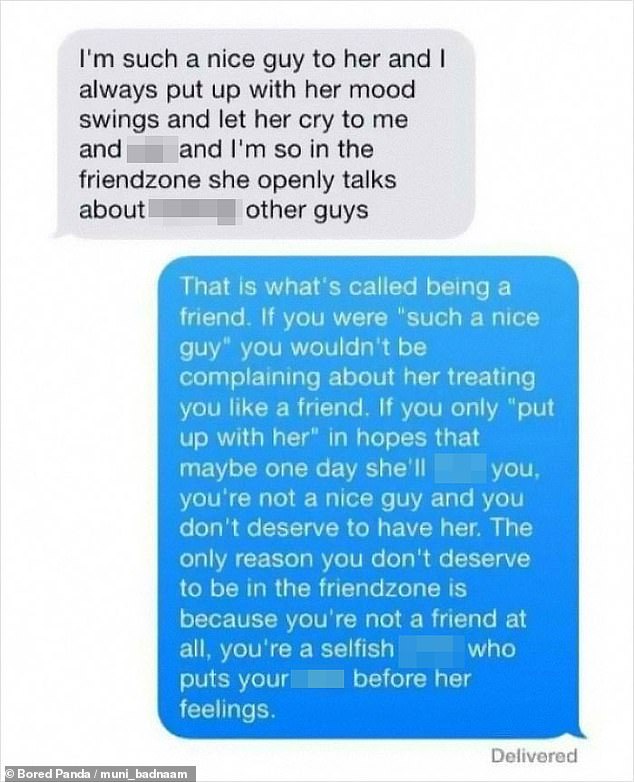 One friend, from an unknown location, put an acquaintance back into their place after they complained a girl they wanted to date had ‘friend-zoned them’