Wonderful Tonight laid down an impressive starting marker in a season where her target is the Prix de L’Arc de Triomphe at Longchamp in October with an authoritative length and half win in the Hardwicke Stakes.

The 5-1 shot was a third winner of the week for jockey William Buick but the first in the career of Sussex-based, French-born trainer David Menuisier, who had feared his filly may lack race sharpness on her seasonal debut.

But those concerns proved unfounded as Wonderful Tonight rattled through the gears to pull clear of Aidan O’Brien-trained 9-4 favourite Broome and prompt her Arc odds to be slashed to 14-1. 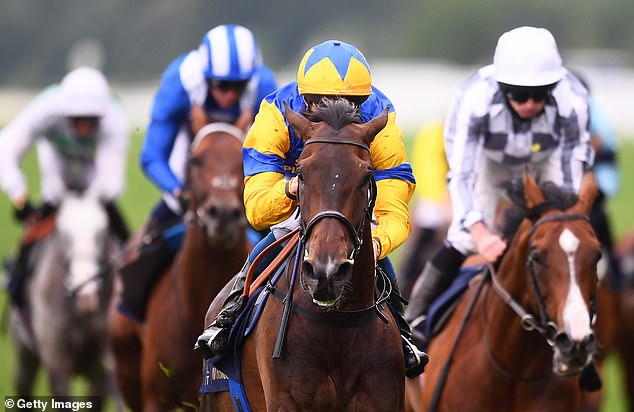 Menuisier said: ‘She is an absolute champion. I could not be bullish before the race because she was always going to improve for the run. She was up against tough opposition who had all had the benefit of at least one run.

‘She showed a tremendous turn of foot which she has not shown before. She is wonderful all day!’

Wonderful Tonight excels in testing conditions – she won both the Group One Prix de Royallieu at Longchamp and the Group One Filly & Mare Turf at British Champions Day at Ascot last season in deep ground – and where she runs will be dictated by conditions.

She will be unlucky not to get her favoured ground in the Arc.

But Menuisier will need the weather gods to be on his side if Wonderful Tonight is to run in next month’s King George VI & Queen Elizabeth Stakes back at Ascot.

Wonderful Tonight is owned by Chris Wright, who founded Chrysalis Records. Jethro Tull, Blondie, Spandau Ballet, Ultravox and The Specials have all been associated with label but not Eric Clapton, who wrote the song after which his filly is named.

Wright simply thought it was a good name for his filly.

Wright said: ‘I’ve never ever had a winner at Royal Ascot. I almost can’t believe it. It is like I’ve died and gone to heaven.’ 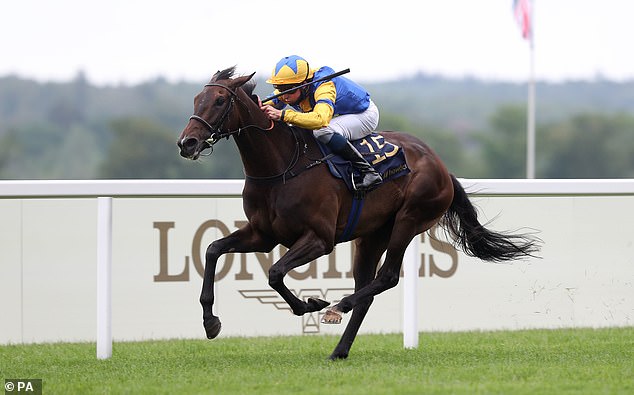 Menuisier said his pride in Wonderful Tonight’s win was made even greater by the fact that the Queen was present at a racecourse for the first time since 2019.

It was certainly an eventful return for Her Majesty.

After drawing the biggest cheer of the day when she arrived by car half an hour before racing, the Queen seemed likely to see her colours carried to success in the opening Chesham Stakes only for Frankie Dettori-ridden Reach For The Moon to be cut down in the last 100 yards by odds-on favourite Point Lonsdale – a colt trainer Aidan O’Brien sees as a future Classic contender – and beaten half a length

The royal colours were carried seventh and 11th place finishes in the Jersey Staked by Tactical and Light Refrain while the monarch’s King’s Lynn, 3-1 favourite didn’t get the best of runs when third in the Wokingham Stakes behind impressive Rohaan, a first Royal Ascot winner for trainer David Evans and jockey Shane Kelly.

There was even a brief demonstration as four Extinction Rebellion protestors, who it is understood had been employed as catering staff at the track, chained themselves to the running rail close to the finish line and unfurled a banner saying ‘Racing To Extinction’.

The feature Diamond Jubilee Stakes went to Ryan Moore-ridden Dream Of Dreams. It was third time lucky for the Sir Michael Stoute-trained seven-year-old after being beaten in photo-finishes when second in the previous two runnings.

A fifth win of the week for champion jockey Oisin Murphy on Foxes Tales in the Golden Gates Stakes saw him crowned the meeting’s top rider for the first time while four wins for John Gosden made him top trainer thanks to more placed runners than fellow four-time winner Andrew Balding.