By Xantha Leatham For The Daily Mail

Woods that inspired Beatrix Potter could be lost due to a surge in a disease affecting the ash tree.

The National Trust says the sheer number of trees having to be felled because of ash dieback has left the charity facing its worst year on record.

Prolonged hot and dry conditions driven by climate change are putting the species under stress and making them more susceptible to the ‘alien’ disease.

It is caused by a fungus which originated from Asia and was first recorded in the UK in 2012. 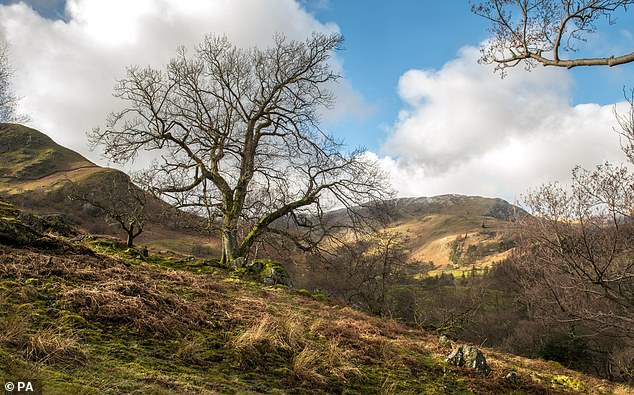 A veteran ash tree in pasture at Glenamara Park, Patterdale. Trees and woods which inspired the likes of Beatrix Potter and John Constable could be lost to a disease affecting ash, the National Trust has warned

Lockdown meant there were fewer teams of rangers checking up on the trees, so staff are now struggling with a backlog of problems. The conservation charity has been felling about 4,000-5,000 ash trees a year in recent times.

However, this year it faces having to cut down around 40,000 ash trees at a cost of £2million.

This means ‘vital’ conservation work, including planting new trees, managing flower-rich meadows and maintenance activities are being put on hold. The ash dieback fungus blocks the tree’s water systems, causes leaves to wilt, shoots to die, lesions on branches and eventually it will die.

It is set to kill between 75-95 per cent of the UK’s ash trees in the next 20 years and is expected to wipe out about 2.5million trees on National Trust land alone. 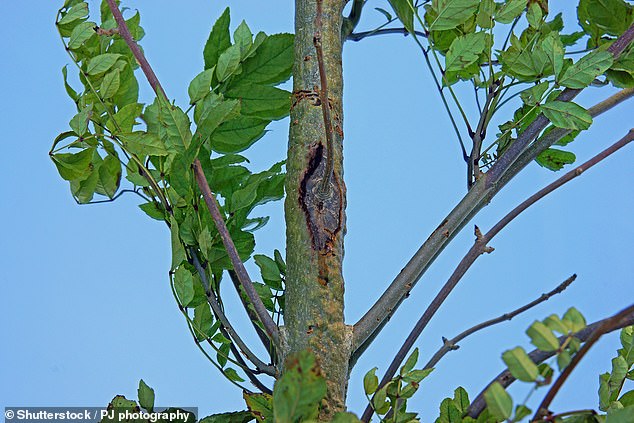 Elsewhere in the Lake District, sites that inspired the work of children’s author Beatrix Potter, including Troutbeck Park Farm, near Ambleside, and High Oxen Fell, near Coniston, are also at risk from ash dieback disease.

The National Trust is warning that other woodlands, including the ravine woods of the White Peak in Derbyshire, which are 80 per cent ash, and in the Yorkshire Dales, will change beyond recognition because of the disease.

Luke Barley, the charity’s tree and woodland adviser, said: ‘Ash dieback is a catastrophe for nature… and this year’s combination of a dry spring and late frost may have dramatically sped up the spread and severity.

‘Ash trees like those at Beatrix Potter’s Troutbeck Park Farm are some of our most culturally significant trees and have stood for hundreds of years but will now be lost for ever.

‘There are also implications for climate change as less carbon is sequestered, homes for wildlife are being removed and people’s access to nature is being diminished.’