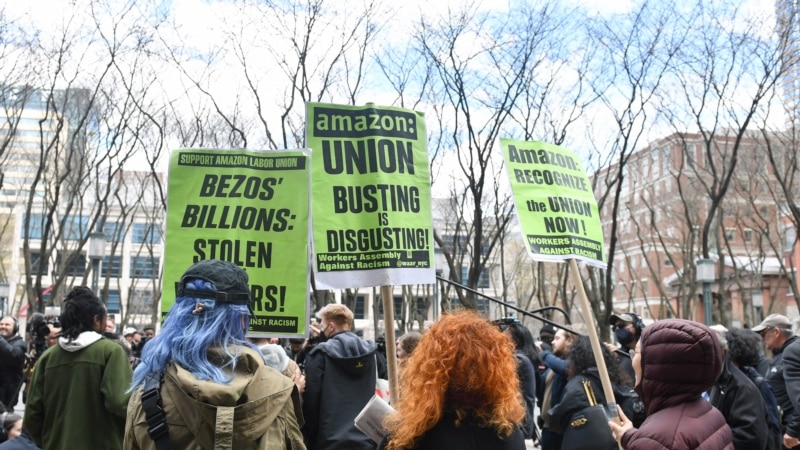 Amazon workers in New York approved on Friday to form the first union of the web colossus in the United States, marking a milestone for that company that opposed the unionization of its employees.

Workers at the Staten Island JFK8 warehouse approved organizing by a vote of 2,654 to 2,131, according to a tally by the federal labor relations agency.

At stake was Amazon’s ability to remain union-free in its home market, a status it has fiercely protected since the company’s inception in the 1990s.

During the fiery campaign, the company tried to dissuade unionization through mandatory meetings and with posters and other messages in workplaces.

Amazon argues that unionization will damage direct relationships between the company and workers, will be a leap into the unknown, and does not guarantee that workers will get better wages or better job security.

The share of unionized American workers fell from nearly 20% in 1983 to about 10% in 2021, according to the Bureau of Labor Statistics.

At Amazon, workers at a warehouse in Bessemer, Alabama, voted overwhelmingly last year against a unionization proposal supported by the Retail, Wholesale and Department Stores Union (NLRB).

But the NRLB called for a new vote, alleging that Amazon interfered in the election by putting pressure on workers. In the new vote, 993 workers voted against forming the labor group and 875 voted in favor.

However, there were 416 “contested” ballots, which was a “definite” number, according to the National Labor Relations Board. That means that the number of ballots still to be resolved is large enough to decide the final result.

Union officials told a news conference Thursday that their campaign last year — which was even backed by President Joe Biden — helped spur similar measures across the United States.

In the coffee chain Starbucks, a movement was unleashed to change the work dynamics in two locations in upstate New York. Since then, union campaigns have been developing in more than 150 multinational locations.

At Starbucks, the campaign was led mostly by young, college-educated workers.

Beyond those sectors, unions have struggled to gain ground, especially in southern and western states, where the percentage of unionized employees is particularly low.

Sarah Palin Is Running For Congress