A cockroach belonging to the world’s heaviest species has been rescued by a family after heavy rainfall flooded its burrow and left it tangled in grass.

The giant burrowing cockroach was found stuck in a clump of wet soil and roots in the Valley Of Lagoons in Queensland on January 16 after heavy rainfall.

Ebriony Rawlins discovered the struggling insect after tropical cyclones in the north saw above average rainfall wash up roaches to the surface while their tunnels filled with water. 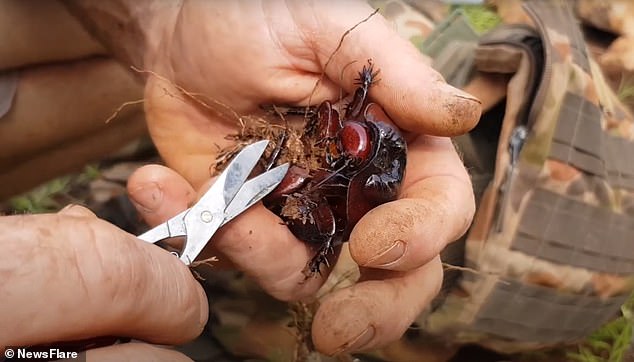 ‘If he didn’t get back in his burrow soon, he would be easy targeting for predators above ground,’ she said.

‘So we began to work quickly by using what tools we had on hand to begin removing him from the grass.’

Ms Rawlins and another man flipped the roach on its back and attempted to pluck out the mud caught in its legs.

When the insect remained immobile from the grass, they used a pair of small scissors to snip away at the roots to avoid damaging his exoskeleton.

The burrowing roach – almost the size of the man’s hand – continued to squirm as the pair finally dislodged the mud from its stomach. The species can weigh up to 1.225oz.

Despite the roach’s shocking size, Ms Rawlins said they are known for being the ‘world’s friendliest cockroach’

‘After some time he was freed and able to move about like normal again’, Ms Rawlins confirmed.

The pair relocated the cockroach to a nearby burrow following their rescue mission.

‘He is now able to live a happy free life without being caught above ground in grass and roots.’

Despite the giant burrowing cockroach’s shocking size, Ms Rawlins said they are known for being the world’s friendliest.

‘They are the only cockroach in the world that is known to have permanent burrows and hey have no wings but they have a gentle and peaceful nature,’ she said