A bad date with bleach a few months ago resulted in me waking up with half my long locks snapped off, on the pillow.

The only way I could imagine having healthy hair again was to cut it all off and start again, this time without the dye. As a result, I’ve been letting my natural grey hair grow in — something lots of women have been forced to do with hairdressers closed over lockdown.

But whereas most will be stampeding back to the salon this week, to my huge surprise, I’ve found I absolutely love being grey.

Yet, according to a new study from the University of Exeter, published in the Journal of Women & Aging, some women who go grey (like me) face social rejection, a loss of credibility, are made to feel invisible and even seen as less competent. 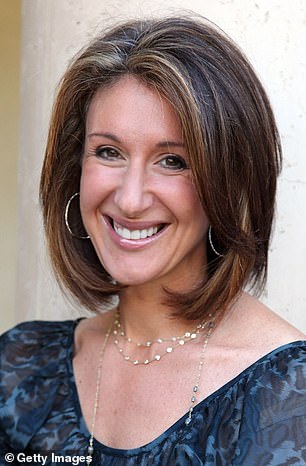 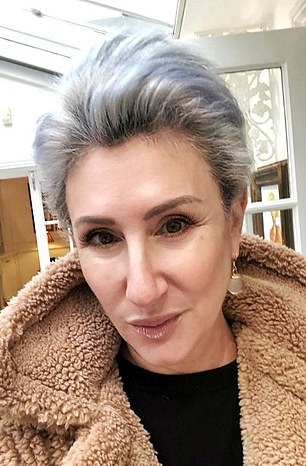 JANE GREEN: ‘I love that my hair is the colour it is supposed to be. It helps that it’s never felt better.’ Pictured: Jane before (left) and after (right)

My husband Ian was nervous when I told him I was ditching the dye. He met me as a brunette in the early Noughties, who soon became a blonde. To combat the dark roots, I had to go to the hairdresser every four or five weeks. It was deathly boring … and expensive.

Soon after turning 50, I dyed my hair pink for a lark, and loved it.

When the pandemic hit, I started dyeing it myself at home, bleaching the locks a platinum blonde before turning them pink at a cost of next to nothing.

I thought I was a genius, albeit one whose hair was growing increasingly straw-like — until the morning I woke up to find lots of my hair had snapped off, and I was left with half a mullet.

I had no choice but to hack it all off, stop bleaching and go natural.

And so I have been letting my silver in, which isn’t nearly as silver as I would like. 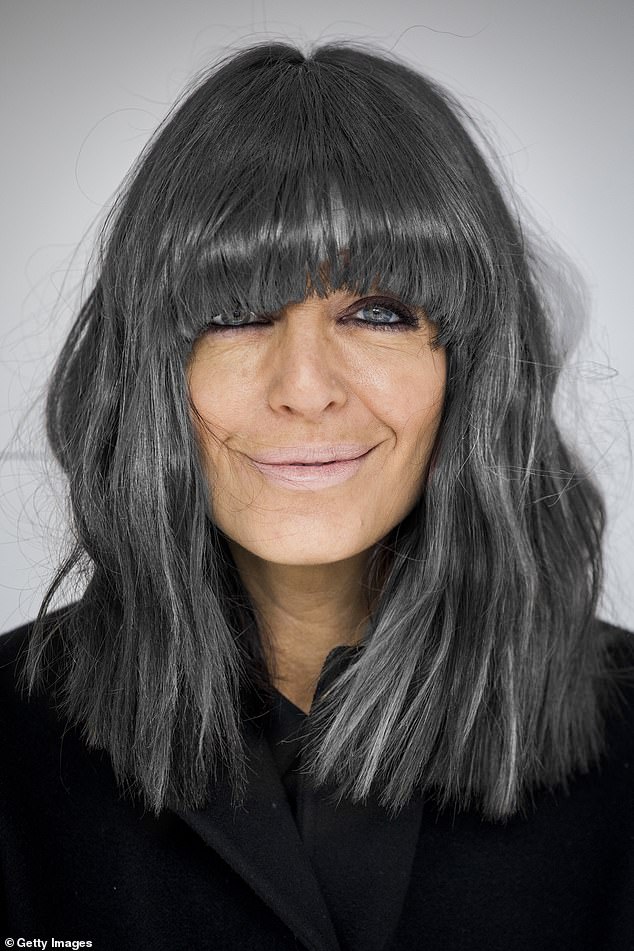 Fringe benefit: How Claudia Winkleman would look if she switched to a Strictly steely hairdo 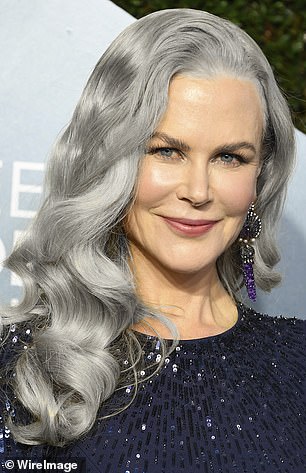 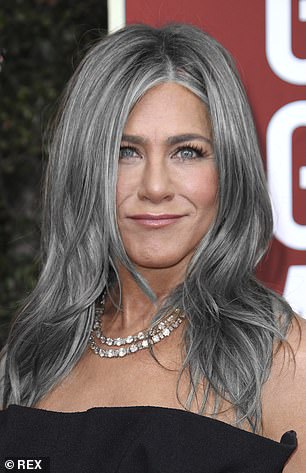 I have discovered scores of online women doing the same. ‘Silver Sisters’, they call themselves, or ‘cotton-haired women’. ‘Ditch the dye!’ we all proclaim loudly, thrilled as our silver streaks emerge.

There are now scores of Instagram accounts of women from their 20s up, who are letting their grey hair grow in, and bolstering each other during the process — a wonderful virtual support system.

But has going grey changed me? I certainly don’t think so. The only change I’ve detected is that I’ve found myself in a wardrobe of mostly grey these past few months, to match my hair.

My gold jewellery has been set aside for chunky silver earrings and necklaces, and I do not leave my house without make-up. I knew the grey could be ageing, so I try and offset that by ensuring my hair is blow-dried, and I always have lipstick on.

Still, I am aware of occasionally being treated differently. The Yummy Mummies, thousands of whom have left the city to move out to quieter suburbs (like mine) due to the pandemic, ignore me. When I was blonde, I looked like one of them, but now I have grey hair, it is as if I am wearing an invisibility cloak. 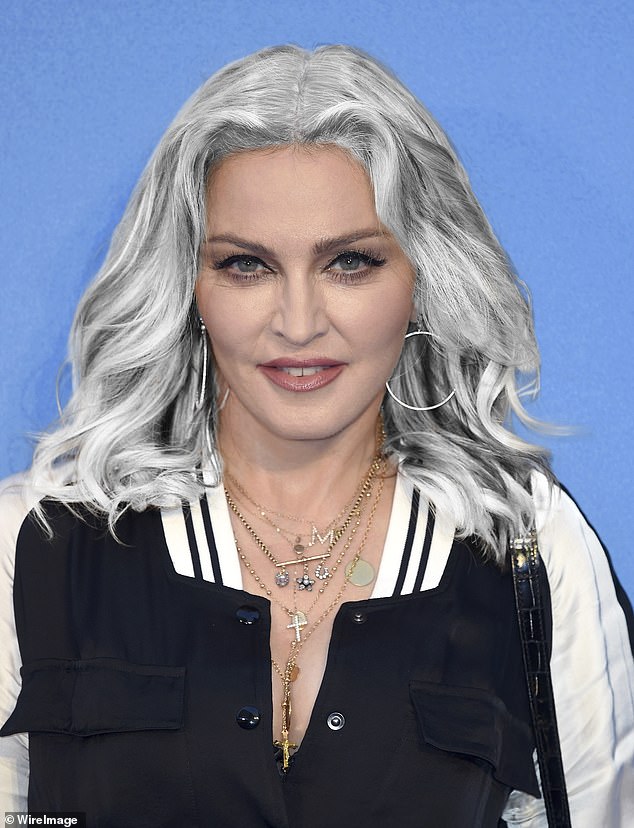 Crazy for hue: Madonna is a mistress of reinvention, so grey would be a cool twist 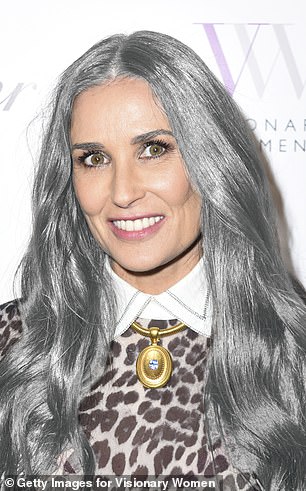 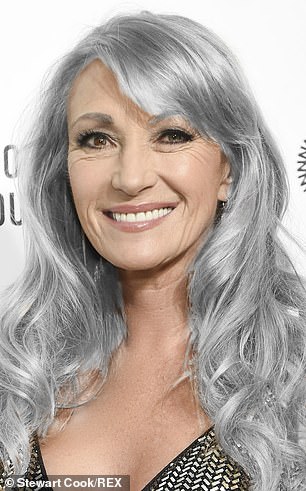 On the one hand, I feel slighted; on the other, I am delighting in being able to eavesdrop so easily. It is every novelist’s dream to be completely ignored while scribbling down excellent overheard conversations.

I used to feel as if I could pass for a few years younger, thanks to oily skin as a girl, which has left me with good skin as a middle-aged woman and few lines. I am no longer passing.

Last week I had a business meeting on Zoom. There were two men on the call. One was in his early 40s, the other in his mid-60s. The older man joked throughout that the younger man wouldn’t remember the Sixties, ‘but Jane and I do’. ‘Good Lord!’ I thought. ‘How old do you think I am?’

Granted, I was born in 1968, but I was a good ten years younger than him. My newly grey hair has aged me in the eyes of others, and all the make-up in the world wouldn’t change what he saw when he looked at me: an older woman.

Yet, the reactions of others has not left me desperate to dip back into the dye. I love making a statement that I’m OK with ageing. It’s said that going grey makes you feel ‘authentic’, and I have to agree.

I love that my hair is the colour it is supposed to be. It helps that it’s never felt better. Thick, lustrous and healthy, I run my fingers through it constantly, amazed at how soft it is. My friends love it, and even my husband — who was extremely worried that it would age me — has grudgingly admitted he really likes it.

So why did I colour my hair all those years? I was off the market, a successful novelist, but aware that society does not look kindly on older people. I liked being seen. I liked being appreciated.

While I am now aware of being ignored, deemed older than my years, I believe that as the silver grows in, more women will admire it and even join the movement.

As for grey-haired women being ‘less competent’ — oh, please! I have just finished my 22nd novel, and it may be my favourite yet.

You may disagree, but I strongly advise you not to take it up with me — I have thousands of Silver Sister warriors on my side, and we are all empowered by the grey.