‘You would have a different president right now’: Trump says he is still ‘disappointed’ with Pence

‘You would have a different president right now’: Trump says he is still ‘disappointed’ with Mike Pence for certifying Biden’s election win and insists his VP should have sent the results ‘back’

Donald Trump blamed Mike Pence on Monday for his 2020 loss, claiming his former vice president should have done more to stop Congress certifying the Electoral College results on January 6.

‘What’s your take on Mike Pence and what’s the relationship like?’ Real America’s Voice host David Brody asked Trump in a Monday interview where he noted the former president’s supporters will ‘never forgive’ Pence.

‘Well, I’ve always liked Mike and I’m very disappointed that he didn’t send it back to the legislatures when you have more votes than you have voters in some cases, and when you have the kind of things that were known then,’ Trump said.

‘I was disappointed that he didn’t send it back,’ he continued in reference to the Electoral College results.

‘I felt that he had the right to send it back. He should have sent it back. That’s my opinion.’ 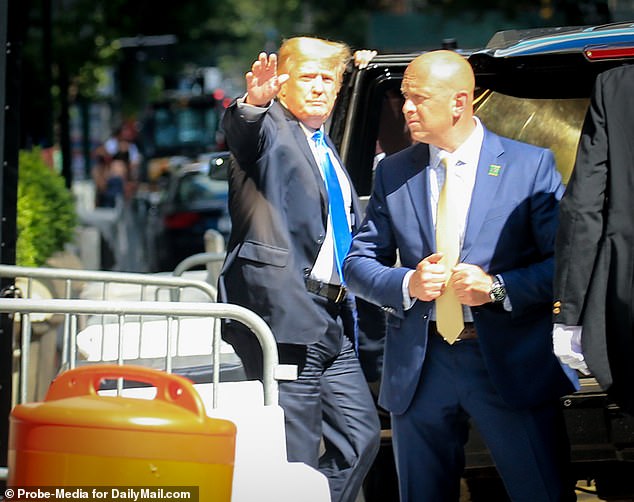 Trump, pictured  departing Trump Tower in New York City on June 15, has repeated the false idea that Pence could have done more to stop Congress from certifying the Electoral College results on January 6

As vice president, it was Pence’s responsibility to preside over the joint session of Congress on January 6, 2021 as they would vote to certify the presidential election results from each state.

Trump claimed several times since Election Day in November 2020 that Pence could have stopped Congress from certifying the results, which is not true.

While many Republican lawmakers voted against the results in a few swing states, it was not enough to stop the overall body from affirming the win for Biden two months after the election took place.

A vice president does not solely hold the power to stop Congress from its duty to certify the Electoral College results in a presidential election.

‘I think you may have found that you would have had a different president right now had he sent them back,’ Trump added in his interview.

Pence was widely praised on January 6 for immediately condemning the stampede of Trump supporters who breached the Capitol that day to protest the election results. Trump, on the other hand, was impeached for a second time by Democrats who claimed he ‘incited’ the riot with his rhetoric.

Trump has still repeated his claims that there was widespread voter fraud in the 2020 election that led to his loss to Biden. 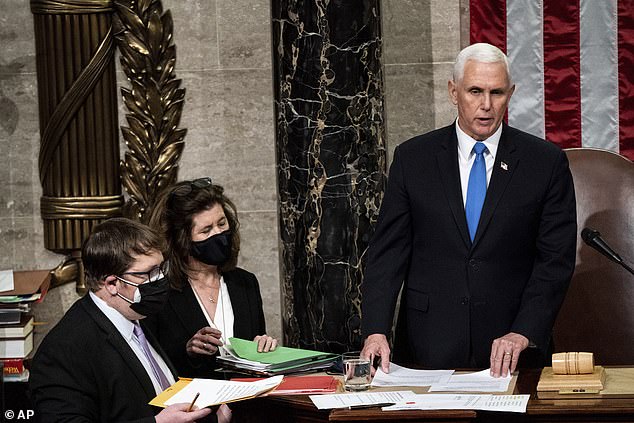 As vice president, Pence presided over the joint session where lawmakers certified the results of the 2020 election

He has not officially declared a run for president in 2024, but has strongly alluded to it and has restarted his rallies starting this weekend. He previously said he will wait until after the 2022 midterms to announce his decision on another White House run.

Pence is also rumored to be considering a primary run as he has emerged back in the public eye over the last few months and remained in the D.C. area rather than returning to Indiana after leaving office on January 20, 2021.

One of his most likely running mates is Florida Governor Ron DeSantis, who actually came out as the preferred Republican presidential nominee over Trump in a straw poll among conservatives at the Western Conservative Summit.