Devoted mum Zara Tindall enjoyed some precious mother and son bonding time this weekend as she made the most of the sunny weather at the Houghton Hall International Horse Trials.

The doting mother-of-three, 40, who is married to England rugby ace Mike Tindall, was spotted giving newborn baby Lucas Philip a kiss and a cuddle while sat on the grass, after lifting him out of his pram.

The event is the first time the couple have offered the public a glimpse of their new addition – and he certainly bears a strong resemblance to his father.

Cutting a casual figure today, Zara donned a baseball cap over her ponytail and a navy gilet on top of a navy and white striped top and jeans for the Norfolk festival.

She completed her look with a pair of black trainers and stylish RayBan sunglasses. 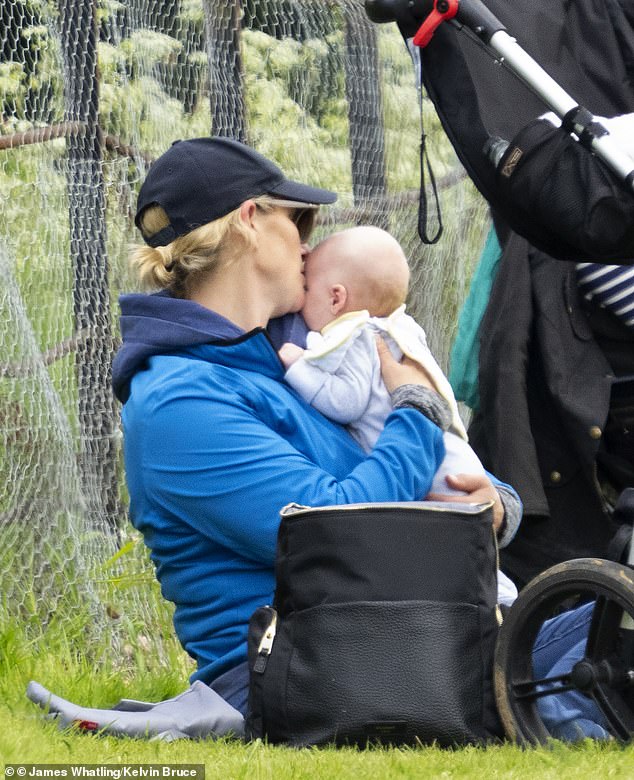 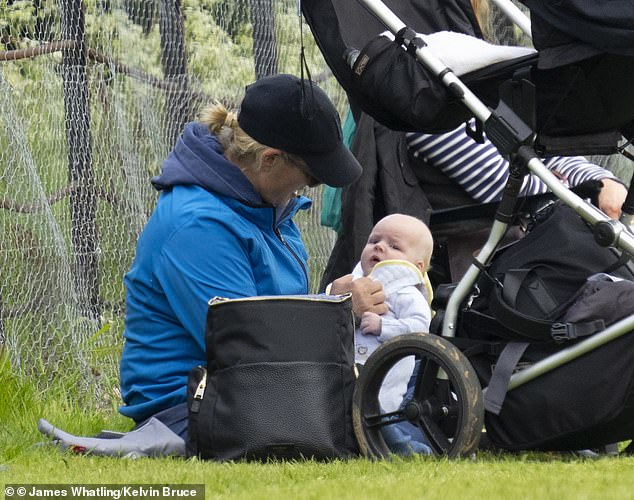 The adorable little boy is the spitting image of his father, England rugby ace Mike Tindall 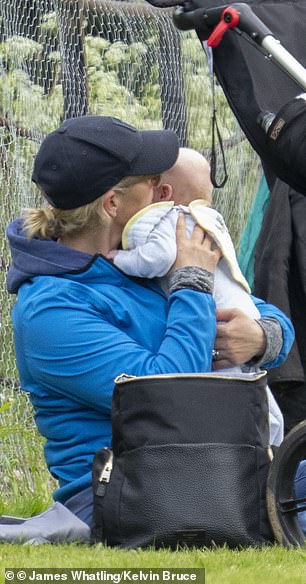 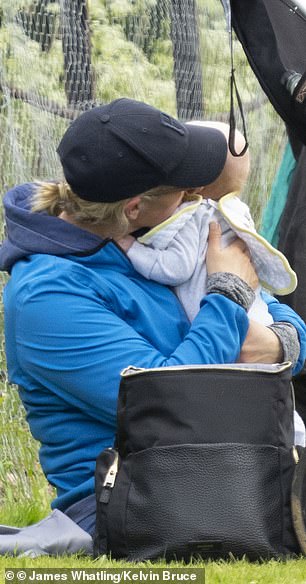 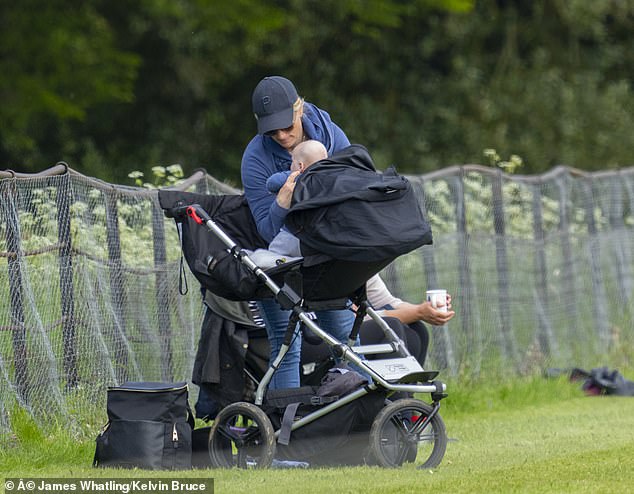 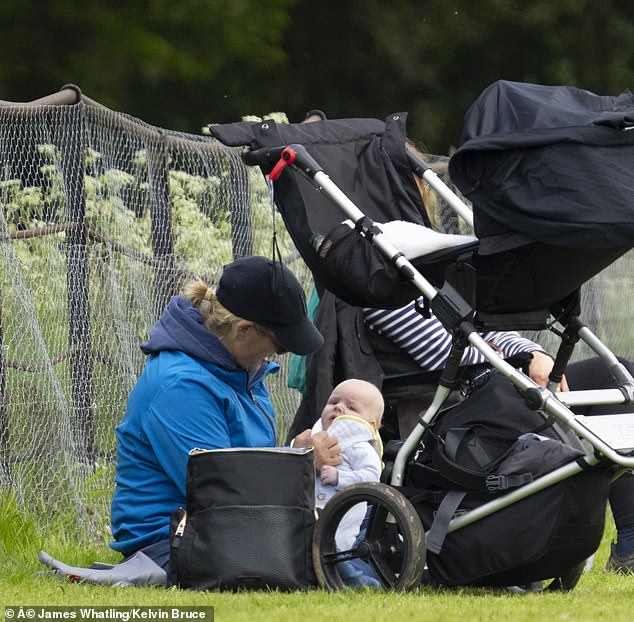 Sitting the little boy on her lap, the royal – who also has two daughters – looked a picture of happiness

While Lucas enjoyed a nap in his pram in the shade, the Queen’s granddaughter enjoyed the day’s events and caught up with a fellow equestrian.

Zara gave birth to her first son Lucas, weighing 8lbs 4oz, at 6pm on a Sunday in March on the bathroom floor of their family home on Princess Anne’s Gloucestershire estate.

Yesterday Zara was seen introducing her new arrival – dressed in a blue puffer jacket with adorable animal ears – to a fellow equestrian before leading horses at the event with her son strapped to her.

At one point she was seen offering one man a hug as she chatted to competitors at the event. 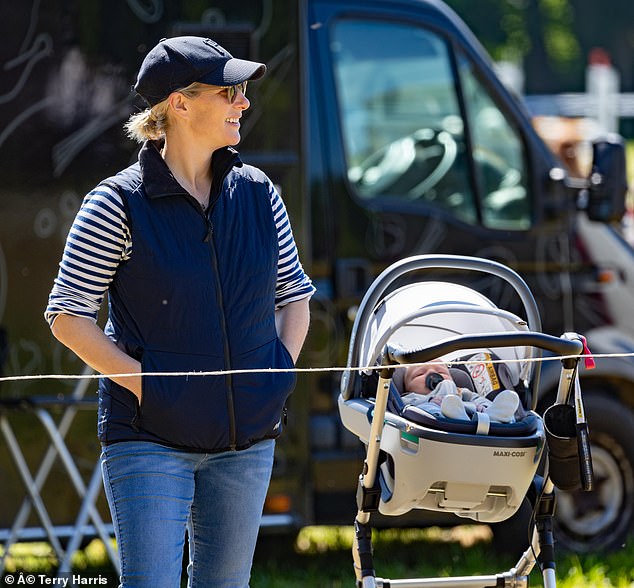 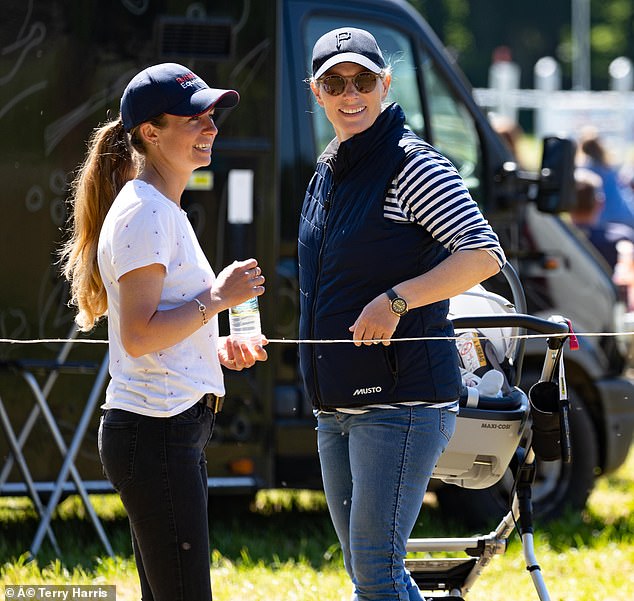 Yesterday the doting mother-of-three, 40, who is married to England rugby ace Mike Tindall, revealed the first glimpse of their two-month-old Lucas Philip. Today she was pictured chatting to a pal at the event 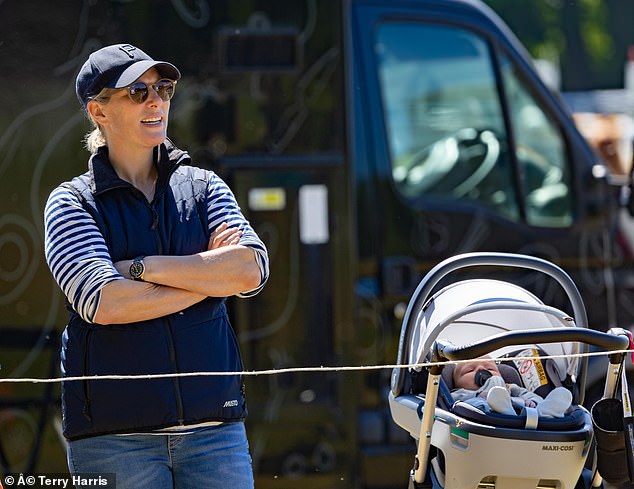 While Lucas enjoyed a nap in his pram in the shade, the Queen’s granddaughter enjoyed the day’s events and caught up with a fellow equestrian 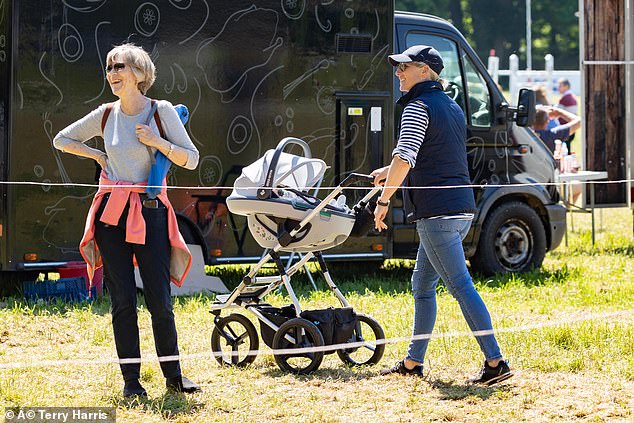 Zara gave birth to her first son Lucas, weighing 8lbs 4oz, at 6pm on a Sunday in March on the bathroom floor of their family home on Princess Anne’s Gloucestershire estate. Pictured with Lucas and a friend today

The three-day-festival is a regular fixture in the royal diary, with the Duke and Duchess of Cambridge, William and Kate, attending in 2018 with their children Prince George and Princess Charlotte.

Meanwhile Zara, who is the daughter of Princess Anne and Mark Phillips, has previously competed in the event.

She received an MBE in 2007 for services to equestrianism and won a silver medal at the 2012 Olympics as a member of the Great Britain Eventing Team.

Mike confirmed the news of his family’s new arrival on his podcast The Good, The Bad and The Rugby – and hailed Zara a ‘warrior’. 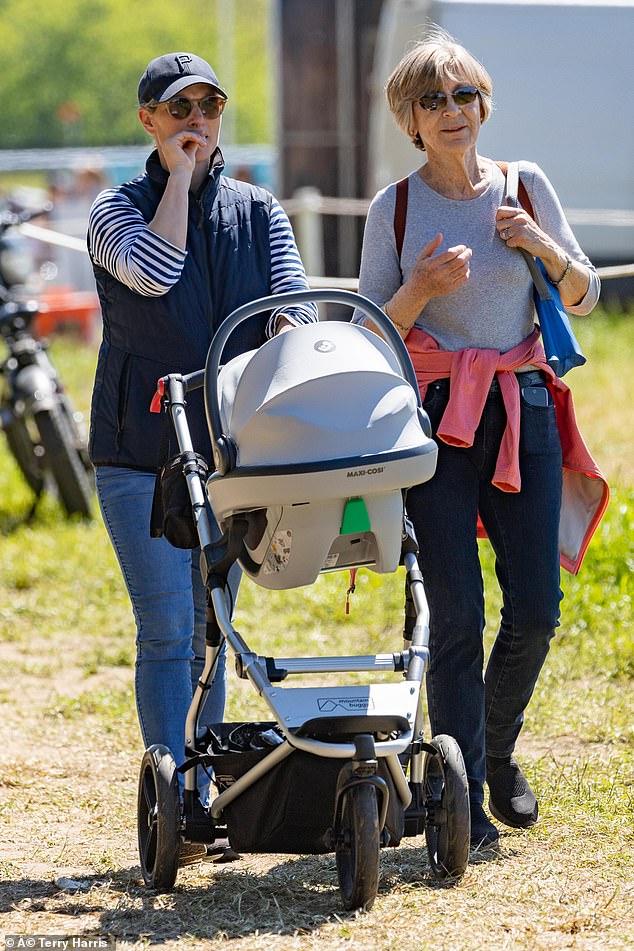 The three-day-festival is a regular fixture in the royal diary, and Zara has previously competed there (pictured with her son and a companion today) 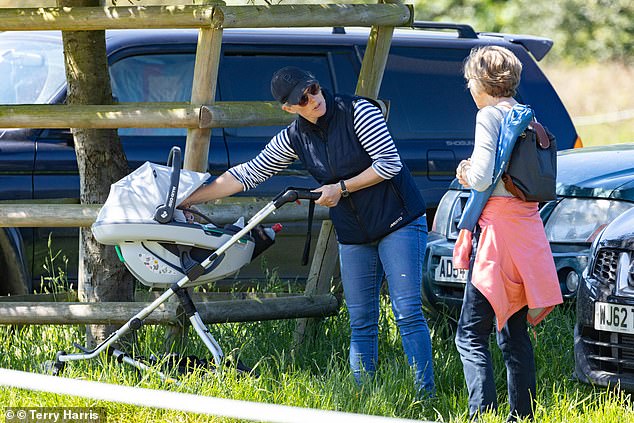 Speaking in March, he revealed he took the little one straight downstairs to watch sport on TV, after snipping the cord and enjoying skin-on-skin contact.

The unconventional royal birth announcement via Mike’s podcast shows yet again a different approach from the Tindalls, who revealed their third pregnancy in the same manner.

In the past, the couple had pregnancies formally announced by Buckingham Palace.

A spokeswoman for the couple said: ‘Zara and Mike Tindall are happy to announce the birth of their third child, Lucas Philip Tindall.’ The little boy is the Queen and the late Duke of Edinburgh’s 10th great-grandchild, and 22nd in line to the throne. 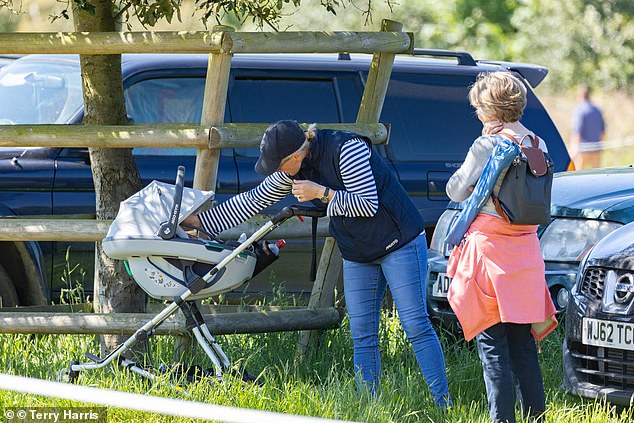 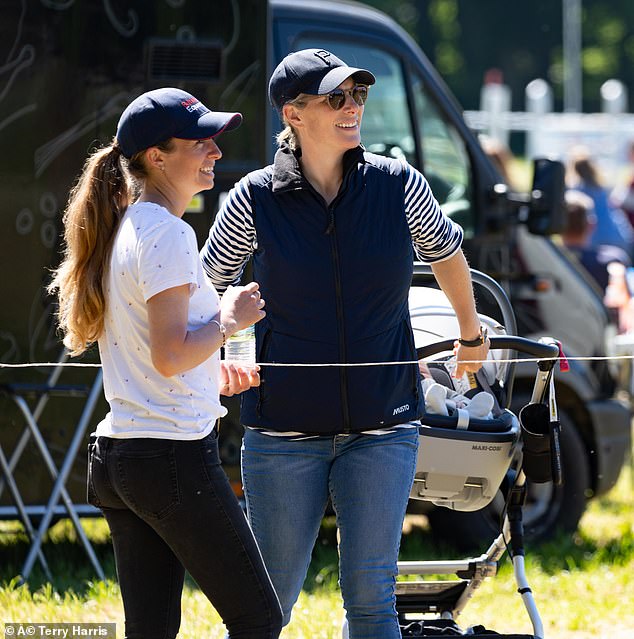 Speaking about the birth, Mike told how Zara had experienced contractions the night before, so they organised childcare for Mia and Lena – but the little boy arrived so fast they didn’t have time to make it to hospital.

Mike recalled: ‘Fortunately Zara’s friend Dolly [Maude] is, she’s actually more important than I am at making sure she’s been at all three of my children’s births, she was there and recognised that we wouldn’t have got to the hospital in time, so it was run into the gym, get a mat, get into the bathroom, towels down, brace brace brace!

Asked how his daughters reacted, Mike admitted they didn’t tell them they thought Zara was in labour, but he suspected Mia had sussed.

‘Mia’s quite on it, she’s quite street smart, so she was like, “why are we not going home for tea?” They were going, “they’ve had to pop out for something…” “where have they had to go?” will you just stop asking questions… and then when she got in she was over the moon, both of them were. 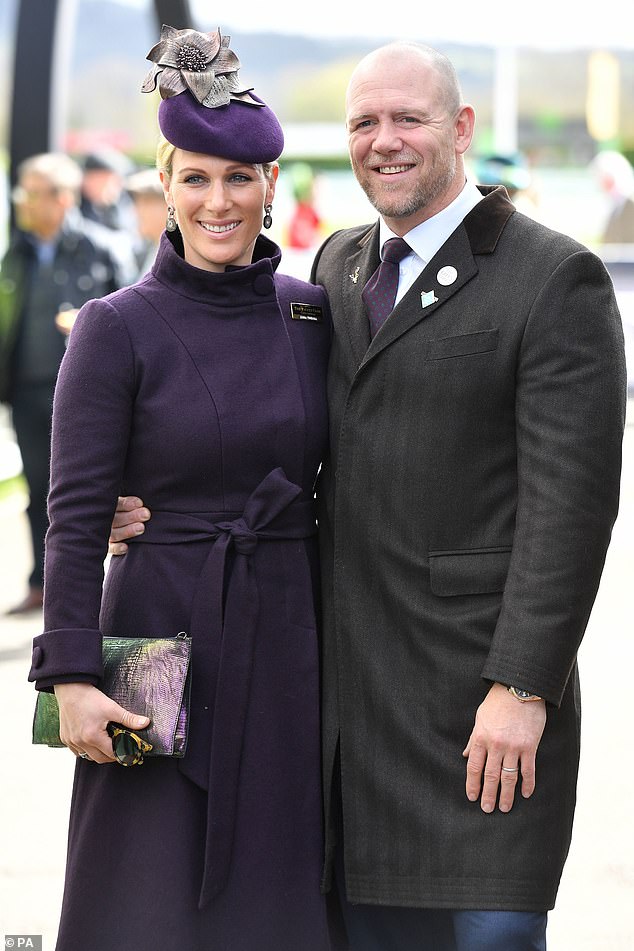 Mike Tindall, 42, confirmed the news of his family’s new arrival on his podcast The Good, The Bad and The Rugby – and hailed Zara a ‘warrior’ (Pictured in March 2020)

In December 2016 the couple revealed that they lost their baby, a month after announcing the pregnancy.

Two years later in an interview with the Sunday Times, Zara, opened up about the devastation of losing the baby and revealed she had suffered a second miscarriage before falling pregnant with daughter Lena, now two.

Zara said the hardest part of her first miscarriage was having to tell the world because news of the pregnancy had been made public.

She explained: ‘In our case, it was something that was really rare; it was nature saying, ‘This one’s not right.’ I had to go through having the baby because it was so far along.’

Covid: Student fears she will be ‘left with nothing’ if no exams

After a large loss, cryptocurrency markets rallied back yesterday, with Bitcoin and Ethereum up 15% and...