Nearly a third of Nevada’s population is Latino, and the state has the fifth highest share of Latino residents of any state.

However, only about 30 percent of Latinos in the state have been vaccinated, compared to 50 percent of the non-Hispanic white population.

Public health experts say issues including a lack information and fear of authority were contributing factors.

Now, groups like Make the Road Nevada and Dream Big Nevada – which typically focus on immigrant rights and supporting undocumented youth – have pivoted during the rollout of the COVID-19 vaccine, working to make sure the Latino community is informed and has access to the shots.

This includes posting Spanish-language billboards across the state and published Facebook posts and Live Videos in Spanish to directly reach the public. 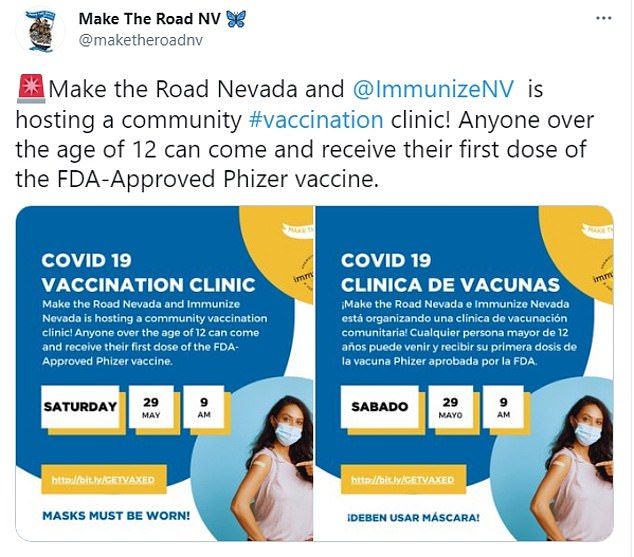 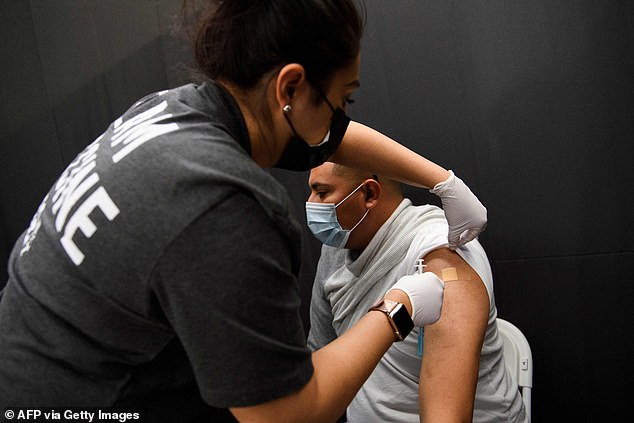 Latinos are less likely to have been vaccinated so far due to a lack of Spanish speaking resources available, vaccine hesitancy and a potential fear of authority figures in America. Pictured: Farm worker Marcos Cruz receives a dose of the Johnson & Johnson Covid-19 vaccine, March 13

Blanco Macias, director of operations for Make the Road, told NBC News she got the idea to pivot towards vaccine work from an experience with an older Latino man in which he tried, and failed, to get information on the vaccine.

Her group is now working with Immunize Nevada, a non-profit focused on spreading awareness about vaccines, to set up a pop-up vaccine clinic on Memorial Day weekend.

The two groups have teamed up with Walmart to distribute 300 vaccine doses to the community this weekend.

Dream Big has converted its headquarters into a vaccine site, where up to 500 people a day are being vaccinated.

As of this week, about 4,000 people have been vaccinated at Dream Big vaccine sites, including a special pop-up clinic they put together for Las Vegas’ Cinco de Mayo celebration earlier this month. 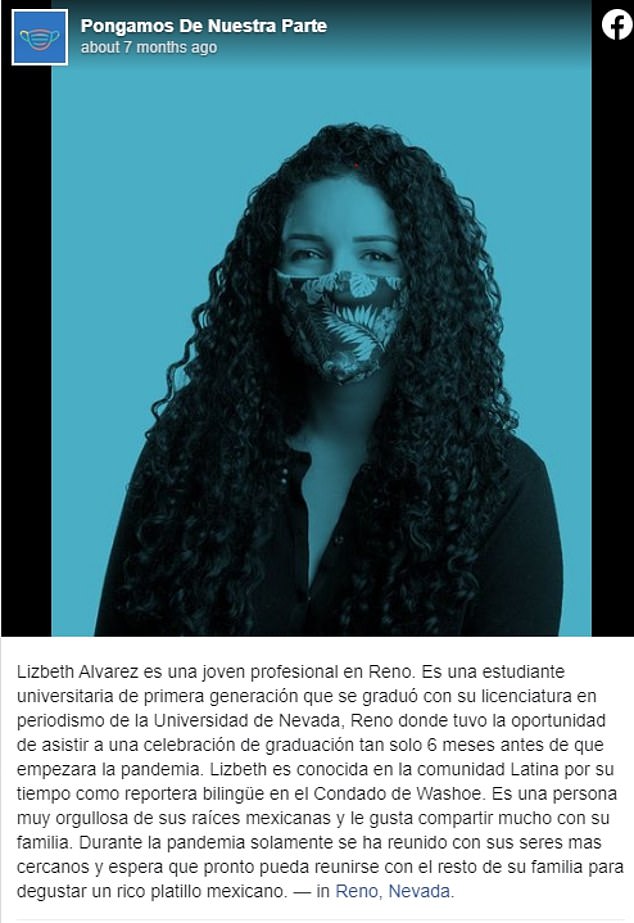 One activist, Lizbeth Alvarez, shared stories on Facebook and Spanish language billboards across the state as a part of the “Pongamos de nuestra parte” (Let’s do our part) campaign

‘They were not only getting the vaccine, but they were also getting a taste of normalcy with the event, because for many, it was the first time in over a year that they were able to gather in a larger group than just our immediate family members,’ Dulce Valencia, director of operations at Dream Big Nevada, told NBC News about Cinco de Mayo.

Valencia said that her groups initial focus during the pandemic was making sure the undocumented population of Nevada was updated on the status of DACA, a law that protects undocumented people who were brought here as young children.

The law was put under fire by the Donald Trump administration, and has been the subject of Republican chagrin in recent years.

They decided to pivot once they became aware that Latino’s were not getting vaccinated at the same rate as their peers.

‘And what we were finding is that Latinos wanted to get the vaccine, they just didn’t know if or where they could get it.’ 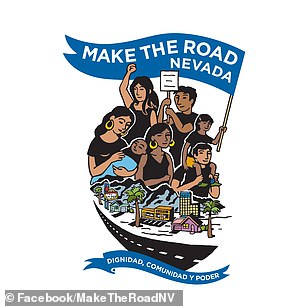 Combating vaccine misinformation has been a challenge for the groups as well.

Many falsehoods about the vaccines and their long term effects have been spread on social media since they first became available in December.

These false social media posts have become especially common in immigrant communities, deterring some from receiving the vaccine.

All three available COVID-19 vaccines are safe and effective against the virus.

Macias learned of this problem after her mothers hesitation to receive the vaccine due to concerns berthed on social media.

She decided to create a vaccine fact sheet in Spanish to distribute throughout the community and combat misinformation and vaccine hesitancy in her community.

Lizbeth Alvarez, who works for the ad agency KPS3, contributed to the effort as well.

She worked with Latino community leaders in the area to share their stories and promote the safety of the vaccine.

Alvarez shared stories on Facebook and Spanish language billboards across the state as a part of the “Pongamos de nuestra parte” (Let’s do our part) campaign.

The billboards especially grabbed attention, as Spanish language billboards in the area were rare.

Stories from the campaign resonated with people, and many shared their own experiences from the COVID-19 pandemic.

Alvarez told NBC that the area has no Spanish speaking television stations, so the use of billboards and social media posts are an important part of the effort to inform local communities.

The vaccine rollout throughout the United States has slowed in recent weeks, including in Nevada, and groups like Macias’ hope they can kickstart the vaccine effort by quelling fears and hesitancies many may have. 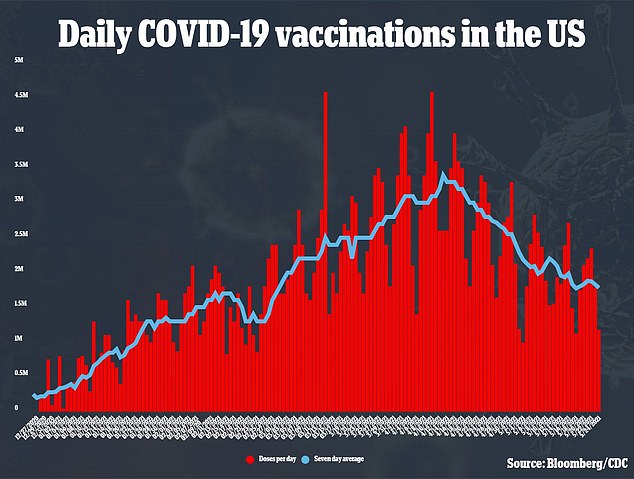