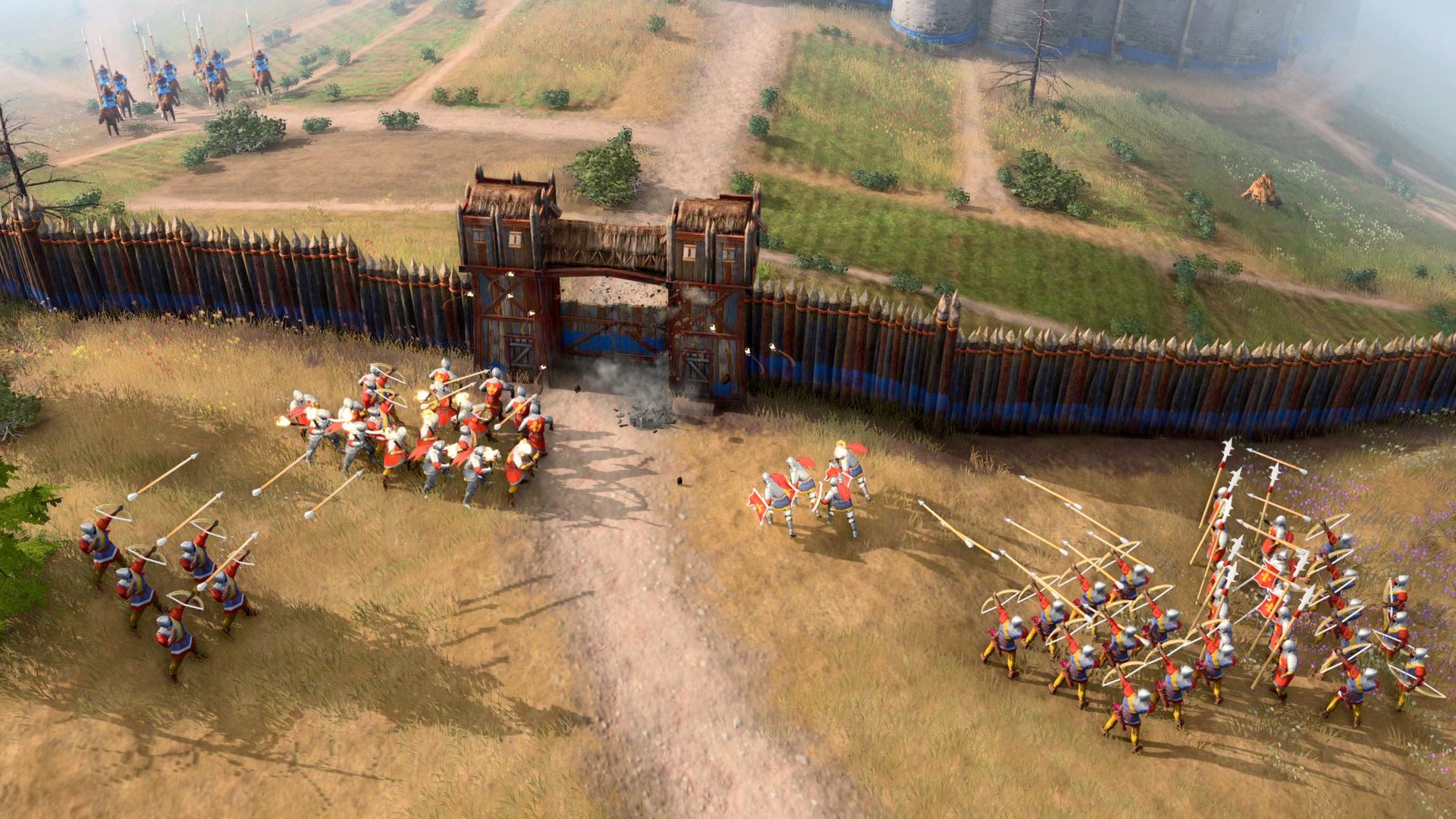 Age of Empires 4 details have been hard to come by since it was first announced in 2019, but no more, as we finally got a proper look at what Relic and Microsoft have been working on all this time. From documentary-style historical campaigns to the series’ first nomadic faction, it’s clear a lot of care has gone into preserving the Age of Empires experience while modernizing the experience.

Though coming from Relic, a developer best known for mixing up the RTS genre with classics like Homeworld and Company of Heroes, Age of Empires 4 is shaping up to be much more of a classic Age game than anything else. You have a base where you gather resources like wood and stone, train armies of around 200 units (though the campaign will sometimes let you exceed this), and send them out to conquer your enemies. Each peasant or cavalryman presents a stylized spin on history, with strong silhouettes and bright, easy-to-read colors. The camera stays at a pretty safe distance by default, and the focus is on the character of your entire civilization much more than any individual character.

Rather than moving the clock forward, Age of Empires 4 returns to the Middle Ages, covering roughly the same time period as Age of Empires 2. You’ll advance through familiar tech levels: the Dark Age, Feudal Age, Castle Age, and Imperial Age, commanding eight distinct civilizations at launch. The ones we know about so far include the English, the Indian Delhi Sultanate, the Chinese, and the Mongols. I couldn’t get any of the devs to tease the others too directly, but they were willing to say that the faction list will not be restricted to only Europe and Asia.

While the first three cultures seem to play fairly similarly to a standard Age of Empires faction, the Mongols represent the biggest departure from the series’ history we’ve seen so far. They are a truly nomadic faction, able to move all of their buildings, including the town center, around the map. They also won’t build walls, since that would be kind of silly if you’re not staying in one place for long. While only eight civilizations at launch does seem like a fairly small number compared to past games in the series, they’re putting a lot of emphasis on making each one have a distinct gameplay style. All will roughly abide by the classic rock-paper-scissors triangle of pikemen, cavalry, and ranged units. But Relic wants their uniqueness to go beyond just a signature unit and maybe a couple of unique technologies.

The care put into each faction goes beyond the mechanics, too. One of the most impressive details I learned is that, in addition to progressing visually from age to age, your units’ language will change as well. The English of the Dark Age will be speaking Old English, a much more heavily Germanic language that isn’t really even intelligible to modern English speakers – you may remember it from school if you ever had to read the original text of Beowulf. In the Castle Age, you’ll hear a form of Middle English, flavored with a splash of French by the Norman invasion, that evokes Chaucer and his contemporaries. By the end of the Imperial Age, they’ll be chatting in a form of Early Modern English similar to what Shakespeare spoke, which modern speakers can probably understand without much trouble. This will apply to all eight civilizations, and Relic sought out native speakers of the languages in question when possible to record many of the lines.

Stay A While and Listen

Sound design is the main area where I noticed Relic leaving its distinctive mark on Age of Empires 4. While it doesn’t give you exactly the same intimate relationship with your units as the smaller scale Dawn of War 2 or Company of Heroes 2, they do seem more alive than past Age games with situational unit barks. Another new mechanic allows you to hide your units in forests, which the enemy won’t be able to see into without popping a scout past the tree line. Soldiers waiting in ambush like this will whisper to you when you click on them, only using their outside voices once they’ve been revealed and the battle is on.

This mostly faithful approach was a subject of debate early in development, and Relic did discuss pushing the boundaries more: How much can you change Age of Empires before it stops feeling like Age of Empires? But ultimately, they felt they made the right choice. Age of Empires 4 is designed to satisfy Age of Empires fans more than fans of Relic’s other RTSes. The changes they did make were in that spirit, incorporating feedback from key members of the Age of Empires community and the lessons their allies at Microsoft and World’s Edge learned making the recent Definitive Editions of the older games.

Tuned in to History

We also got a peek at the first of Age of Empires 4’s campaigns, which centers on the Norman conquest of England and the descendants of William the Conqueror. Rather than focusing heavily on individual characters like Age of Empires 3 or Company of Heroes, these campaigns will be presented almost like a historical documentary, including live-action drone footage taken from famous battlefields and narration of historical events that plays during missions. But Relic aimed to position the campaigns as a “celebration of history” more than a dry, straightforward retelling of events.

The multi-generational saga of the foundational English royals will begin with the legendary clash between William and the Anglo-Saxon claimant, Harold Godwinson, before moving on to the power struggles faced by William’s descendants. The evolution of the dynasty’s base of power and of England as a nation will be reflected with a changing cast, along with a progression through the technological ages.

In some ways, Age of Empires 4 looks overly traditional, and I find myself wishing they had taken more risks or tried to refresh some of the more controversial features of the series’ past – there won’t be anything like Age 3’s home cities in multiplayer, for instance. But I’m also excited by the idea of playing a fully nomadic Mongol civilization and experiencing a truly modern version of the classic gameplay that made me fall in love with Age of Empires 2 all those years ago. You don’t need to send a priest to convert me, wololo-style. I’m already there.

Leana Hafer is an avid PC gamer. Talk strategy games and more with her on Twitter at @TilFolkvang.