Astonishing video has emerged of an e-scooter rider tearing along a three-lane London road at more than 50mph.

The eye-opening footage shows the hi-vis wearing rider hurtling along the outside lane of the A406, North Circular.

The speedy scooter can be seen easily overtaking cars in the left-hand lane and leaving a driver filming the incident struggling to keep up.

But the video has sparked a row among motorists, with some claiming that the actions of the driver filming the incident is more dangerous than those of the e-scooter rider.

The video has been uploaded to Twitter by a cab driver who insists he is not the person filming the incident.

He wrote: ‘Up the A12 (sic) over 50mph! But he does have an HiVis on.  What have they let loose with these things? 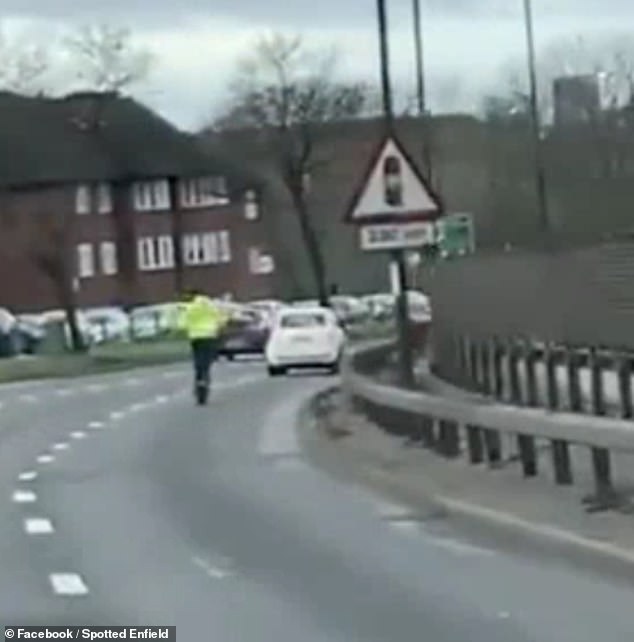 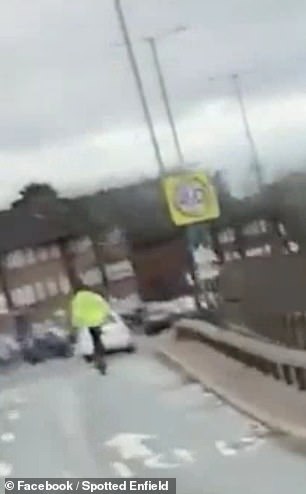 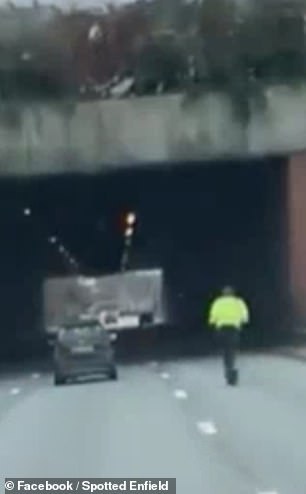 The rider can be seen hurtling along the road, wearing a hi-vis jacket

‘That’s not green that’s dangerous to him and anyone he hits. Can you imagine if he came off at this speed?’

He later added: ‘Just to clarify , this footage was sent to me, it is not a London cabbie taking the footage.

‘The reason I posted it was because of the k******d riding an e-scooter this fast on this road. It was builder who sent it. In a builders van.’

Some backed the driver, with one person saying: ‘With those small wheels the tiniest pothole can throw you off. They simply stop dead in a 6inch hole.’

Others described the incident as ‘absolutely crazy’.

But many hit back at the person posting the video, saying the danger was the driver filming the incident.

One wrote: ‘He’s not breaking the law, you are by filming though.’

Another wrote: ‘I’m afraid two wrongs do not make a right here. Absolutely crazy to witness with your eyes, but then to pick up your mobile phone to film it is also stupid.’

On Twitter user said: ‘On the one hand we have a 3kg scooter illegally using a dual carriageway, but otherwise under good control. 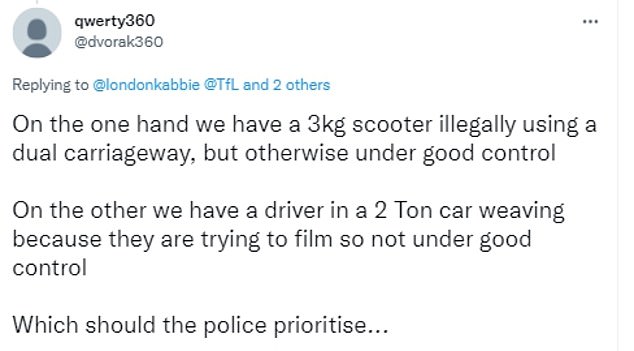 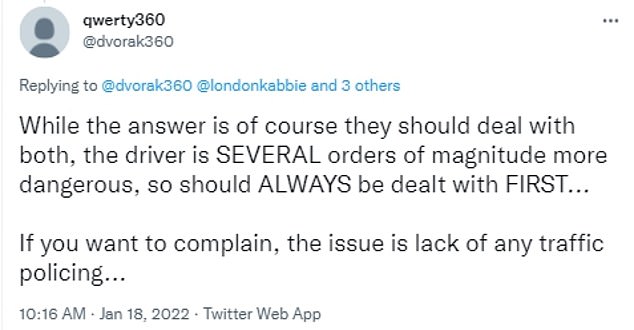 ‘On the other we have a driver in a 2ton car weaving because they are trying to film so not under good control. Which should the police prioritise…?’

In a follow up tweet, the user added: ‘While the answer is of course they should deal with both, the driver is several orders of magnitude more dangerous, so should ALWAYS be dealt with first.

‘If you want to complain, the issue is lack of any traffic policing…’

As e-scooters increase in popularity, a growing amount of them have been advertised to reach higher speeds.

The fastest electric scooter is thought to be the Dualtron X; its advertised top speed is 62mph, but can go as quickly as 75mph, according to blog EScooter Nerds.

Last month e-scooters were been banned from London’s transport network after one exploded on a packed tube train.

Passengers in possession of the two-wheeled gadgets and e-unicycles are now not allowed on any Transport for London services. 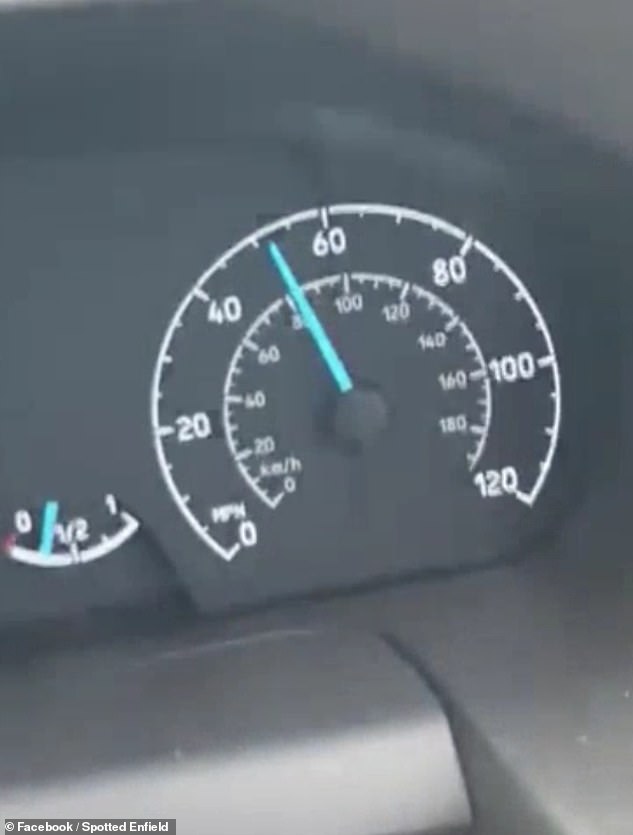 The driver filming the incident, going at around 50mph, struggles to keep up with the e-scooter

The London Fire Brigade has backed the move after an e-scooter erupted into flames on a packed train in November last year.

It was one of many recent close calls which caused TfL to launch an urgent review, supported by evidence from the Brigade’s experts.

The LFB has attended more than 50 fires involving e-scooters and e-bikes up to December 2021 – more than double the amount seen in 2020.

They are often caused by faulty third-party batteries bought cheap off the internet which don’t meet safety standards.

A Met Police spokesperson told MailOnline: ‘In this case we are currently unable to take action as the vehicle and the rider are unidentifiable.

‘(But) Private e-scooters cannot be used on a road because they are illegal.

‘They, unlike fully licensed trial e-scooters, are not fit for the road and have consistently proven to be dangerous to those riding and other road users.

‘Private e-scooters are mechanically propelled vehicles made or adapted for use on the road and as such require insurance, valid licences and pass an MOT.

‘Private devices are not legal for use on the road as they cannot be insured, there is no valid classification on the licence nor would they pass an MOT.

‘If an officer sees a rider on an e-scooter they will ask them to stop and engage with them, explain guidance, enforce traffic legislation around the use of e-scooters and seize e-scooters that are being used illegally on the roads.

‘This enforcement is purely taken in the interest of road safety and ensuring that all road users, including those driving e-scooters, are prevented from coming to harm.’

The Met said it has so far seized a total of 3,987 privately owned e-scooters this year, and will continue to respond to the large scale public fear of injury as a result of their use.

The law on e-scooters in the capital

As of June 2021, e-scooters have been available to rent in several London boroughs.

Councils in the city have been running the trial in a ‘wider effort by TfL, London Councils, London boroughs and the UK Government to enable people to use new and greener forms of transport’.

The safety rules of the rental trial of e-scooters are:

These Catalysts May Propel BTC Price Upto $70k By Mid-2022, This May Be “Investors-Favorite” Buy-Zone? – Coinpedia – Fintech & Cryptocurreny News Media 2021

These Catalysts May Propel BTC Price Upto $70k By Mid-2022, This May Be “Investors-Favorite” Buy-Zone? - Coinpedia - Fintech & Cryptocurreny News Media 2021