Argentina beat Bolivia with Messi’s goal in the first half.. Video 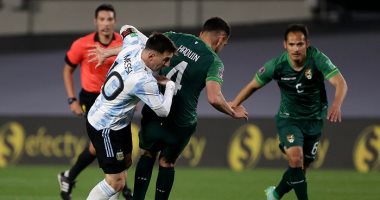 Argentina beat its host Bolivia 1-0, at the end of the first half of the meeting that brings them together at the “Monumental” stadium in the capital, Buenos Aires, as part of the tenth round of the South American qualifiers for the 2022 World Cup.

Lionel Messi, the French star of Paris Saint-Germain, scored the Argentine national team’s goal in the 14th minute of the match, with a wonderful shot to the right of the Bolivian goalkeeper.

Messi succeeded in equalizing the record for the best scorer in the history of South America, with 77 goals, equal to former Brazilian star Pele.

And the video technology “VAR” refused to calculate the second goal of the Tango team in the 26th minute by Lautaro Martinez, the Inter Milan star.