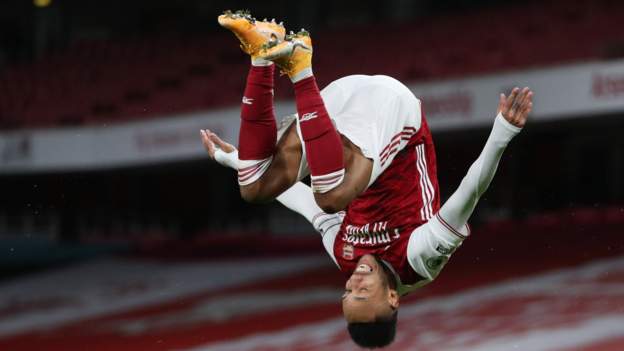 Pierre-Emerick Aubameyang scored twice as Arsenal beat Newcastle to move into the top 10 of the Premier League and increase the pressure on Magpies boss Steve Bruce.

Aubameyang, who had earlier hit the post from a tight angle in the first half, opened the scoring in the 50th minute when he fired past Newcastle goalkeeper Karl Darlow.

Arsenal doubled their lead as Emile Smith Rowe’s pullback found Bukayo Saka and the England international side-footed the ball into the net.

Aubameyang, 31, got his second and the Gunners’ third after Cedric Soares, in his first league start of the season, got to the byline and set up the Gabon international.

Miguel Almiron had Newcastle’s best chance but shot over from the edge of the penalty area when it was goalless.

The victory takes Arsenal above Aston Villa into 10th, with the Gunners seven points adrift of fourth-placed Liverpool in the last Champions League qualifying spot.

Newcastle are 15th, seven points clear of 18th-placed Fulham, although the London side have a game in hand.

For Bruce, who faced calls for his resignation after last week’s 1-0 loss to bottom-of-the-table Sheffield United, his side have now not won in nine matches in all competitions.

Arsenal are in danger of having their worst Premier League season since 1994-95 when they finished 12th – the last time they failed to qualify for European football.

After Mikel Arteta replaced Unai Emery in December 2019, the Gunners finished eighth last season, although they did win the FA Cup in August.

Despite 2020-21 having been a tough campaign for them so far, there have been recent signs of revival and this win extends their unbeaten run to six matches.

They dominated possession at Emirates Stadium and should have taken a 14th-minute lead. Smith-Rowe did well to release Saka and his low cross found Aubameyang, but, off balance and from a tight angle, he could only hit the post with the goal unguarded.

Aubameyang twice more failed to hit the target when well placed and David Luiz should have done better with a free header.

But it only took five minutes of the second half to make a breakthrough as Thomas Partey’s pass forward let Aubameyang run at the Newcastle defence from the halfway line and he blasted in only his second league goal in 10 games.

It became 2-0 10 minutes later when Smith Rowe did well down the left flank and his pass helped Saka score for the third time in six matches.

Soares then made a fine run down the opposite wing and his pullback was steered into the net by Aubameyang, whose return to goalscoring form is a massive boost for the Gunners.

Before the game, Bruce defended the job he was doing with the Magpies and said he would not quit and would “do my utmost to make this better”.

Bruce, whose arrival followed the departure of fan-favourite Rafael Benitez in 2019, added that criticism of him “had been personal from day one”, and that “certain people think I shouldn’t have been in the job to start with”.

Newcastle became the first side to lose a Premier League game this season against bottom-of-the-table Sheffield United, with a 1-0 defeat on 12 January and Bruce later admitted he had picked the wrong team.

But against Arsenal, Bruce made eight changes, with attacking players Joelinton, Almiron, Andy Carroll and Callum Wilson all starting as he pushed to get his side’s first win since a 2-1 victory over West Brom on 12 December.

However, the Magpies still struggled to create opportunities as Joelinton and Wilson had very quiet games. Almiron shot over in the first half and Carroll fired an effort wide in the second, but they never looked like producing a fightback after the hosts took the lead.

In fact, only a number of fine saves from Darlow, who twice denied Alexandre Lacazette and kept out a deflected Aubameyang cross, saved Newcastle from a wider margin of defeat on another worrying day for Magpies’ fans.

Seven games without a league win for Newcastle – the stats

Arsenal are in action away from home on Saturday at 12:15 GMT in the fourth round of the FA Cup, although they do not yet know who their opponents will be.

They face the winners of the third-round tie between Southampton and League One side Shrewsbury, who play their rearranged match on Tuesday. It could mean back-to-back away games against the Saints as they play at St Mary’s Stadium in the Premier League on Tuesday, 26 January (20:15 GMT).

Newcastle have an away game in the Premier League against Aston Villa on 23 January (20:00 GMT), before entertaining Leeds at home three days later (18:00 GMT).

Iran: We are monitoring all US military movements in the region

Boris announces £3.7billion drive to improve or rebuild 40 hospitals in England by 2030