As many as 25% of people in wealthier, whiter NYC neighborhoods have been fully vaccinated while rat 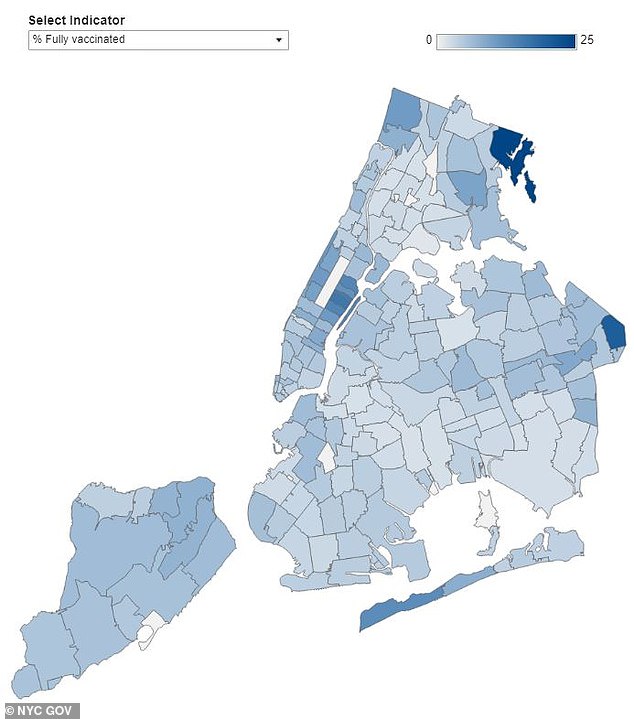 In wealthier, white neighborhoods such as the Upper East, Douglaston and City Island, as many as 25 percent of all adults have received both doses of the COVID-19 vaccine.

But in low-income and minority neighborhoods – which have been hit the hardest when it comes to cases and deaths – vaccination rates are lagging.

Areas such as The South Bronx, parts of central Queens and central Brooklyn have among the lowest rates in New York City with just two percent of all adults fully inoculated against the virus.

These are the same ZIP codes that have been hit hardest by the pandemic, with coronavirus infection rates as high as 7,600 cases per 100,000 (left) and death rates as high as 343 deaths per 100.000 people

Staten Island is the second-most vaccinated borough with six percent of all residents having received both shots.

In the primarily white neighborhood of Douglaston, in Queens, data shows that 20 percent of all adults are fully inoculated.

And City Island, a neighborhood in the Bronx mostly made up of Caucasian residents, 25 percent have been given both jabs.

Many of these areas have reported relatively low coronavirus death rates at around 163 deaths per 100,000, according to city data.

However, rates in the South Bronx, parts of central Queens and central Brooklyn -mostly minority communities – lag behind.

Neighborhoods like Mott Haven, Bedford-Stuyvesant and South Jamaica report just two percent of all adults have been fully vaccinated.

COVID-19 death rates in these ZIP codes have been much higher with as many as 343 of every 100.000 people dying from the disease.

‘Just as we’ve seen a much smaller portion of vaccines going to Black and brown New Yorkers, we see these geographic disparities bearing out as well,’ said Dr Torian Easterling, chief equity officer of the Department of Health and Mental Hygiene.

Vaccination rates are in-line with population share for white people, but blacks and Latinos have accounted  for just 5.4% and 11.5% of vaccinations despite comprising 12.5% and 19% of  the US population, according to CDC data

De Blasio said he believes the recent opening of mass vaccination sites at Citi Field in Queens and Yankee Stadium in The Bronx, reserved of residents of those boroughs, will drive up immunization rates. Pictured: People line up at a COVID-19 vaccination site at Citi Field, February 10

De Blasio said the low vaccination rates in minority communities is due to mix of distrust and racial inequality.

‘We have a lot of work to do,’ he said on Tuesday.

Easterling said more of an emphasis needs to placed on vaccine education so residents feel comfortable enough to take it.

He said two common complains he hears are that the [vaccine causes fertility problems, and that it was the product of a rushed and unsafe scientific process.]

‘The important part is not just earning the trust around vaccines, but also making our communities feel that we’re out here to really serve them,’ Easterling said.

De Blasio said he believes the recent opening of mass vaccination sites at Citi Field in Queens and Yankee Stadium in The Bronx, reserved of residents of those boroughs, will drive up immunization rates.

‘This is about addressing inequality, doing something very tangible about it. This effort will not stop. We are going to go deeper and deeper into communities to ensure there’s equity,’ he said.