ASDA has been accused of demonising police by selling a ‘Petrifying Police Set’ as part of their Halloween costume range.

The £3.00 set was slammed by social media users, several of whom claim to be police officers, who say the outfit portrays police as ‘monsters’.

Among those to complain was one Twitter user, @Sergeant280, who shared an image of the kit and said: ‘It seems like Asda see the police as Halloween monsters.’ 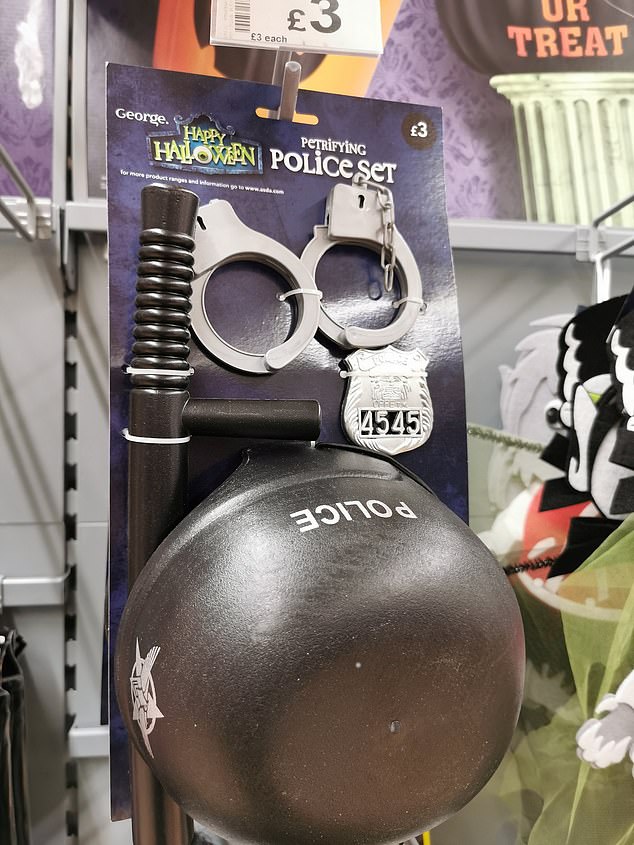 On the Asda website, the product is labelled as a George Home Halloween Police Set.

The officer’s thoughts were echoed by many others, who also found the product ‘offensive’.

@stripeplus1 wrote: ‘Terrible decision by Asda. This clearly shows the mindset within Asda.’

@fh554 added: ‘There have been several other ‘sensationalised’ stories over the last few years about inappropriate Halloween costumes that may offend or upset.

‘Why do Asda not see how this can annoy, offend and upset? I know where I’m going shopping later.’

@ShortArmOfLaw added: ‘I saw this in Asda and thought it gave the wrong message about the police.

‘Police are not scary, they are £heroes I am all about positivity and supporting the police, I would never dress up as police for Halloween.’

And Mark Brown added: ‘Petrifying Police Set’. Yeah thanks for that piece of positive PR for kids about the police.

‘What an absolute nonsense and what the hell has it got to do with Halloween?

‘Do you think it might be worth taking that wording off the packaging at least?’

Asda’s customer service team replied to Mark, saying: ‘I understand your concerns and rest assured, this has been raised with the relevant teams and they advised the product itself isn’t scary.

‘It’s an alternative Halloween outfit for kids and our system requires a scary descriptor for the prdouct.’

Some defended the product, arguing that a police uniform is always a popular choice.

Nyseria added: ‘I do get the negative aspect, but I also get that kids love to dress up as the police and this is an ideal opportunity.

‘I think we are too used to being pilloried remorselessly!’

This is how ‘inclusive’ art & artifacts are keeping museums relevant