Luis Suarez admitted this week he was not prepared for the amount of suffering Atletico Madrid go through – but he made sure there were celebrations to make it all worthwhile as he sealed the LaLiga title in a win at Real Valladolid.

Not since 2013-14 have Atletico got their hands on the domestic title when a certain Diego Costa ran the show in attack.

This time round it was another mercurial striker that handled business and while he has cut an exasperated figure at times this season it was the toothiest of grins that washed over his face when his breakaway goal with 20 minutes to go secured LaLiga honours.

Diego Simeone‘s side travelled to Valladolid with a two-point advantage over bitter rivals Real Madrid and knew a win would make whatever Zinedine Zidane’s side did against Villarreal inconsequential. In the end Los Blancos left it late to win 2-1 but it was all in vain. 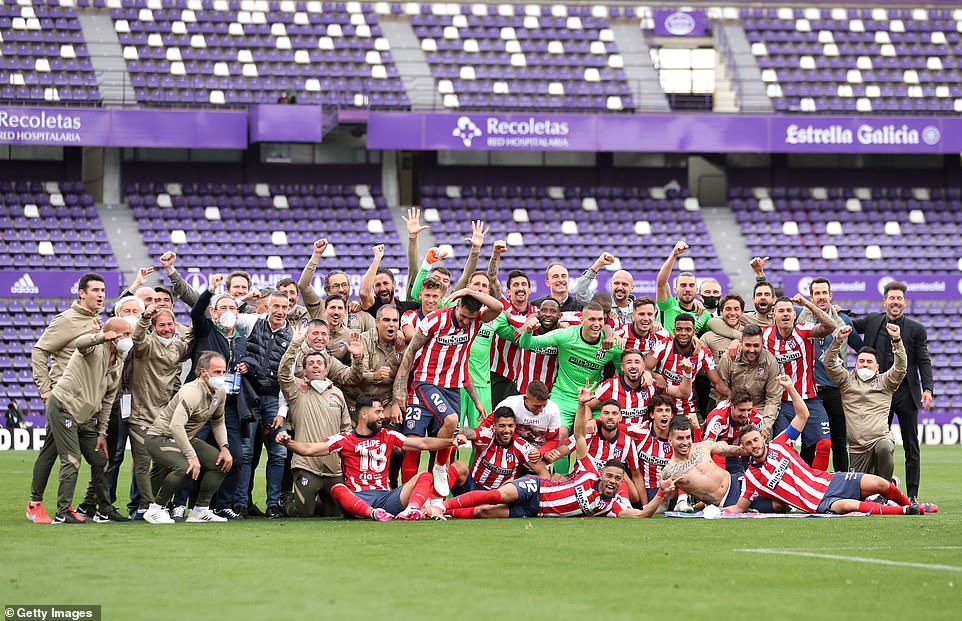 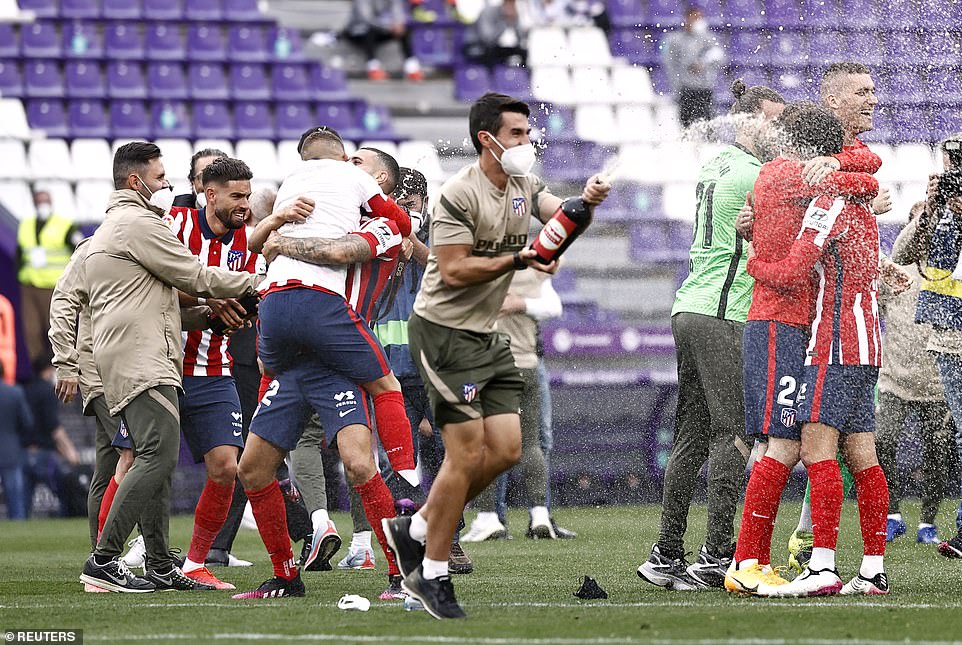 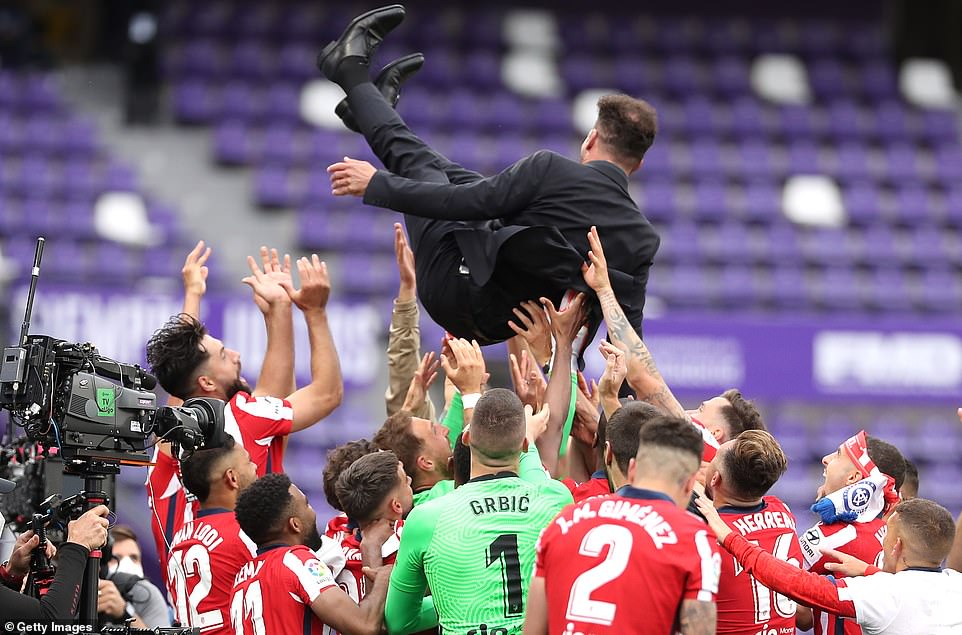 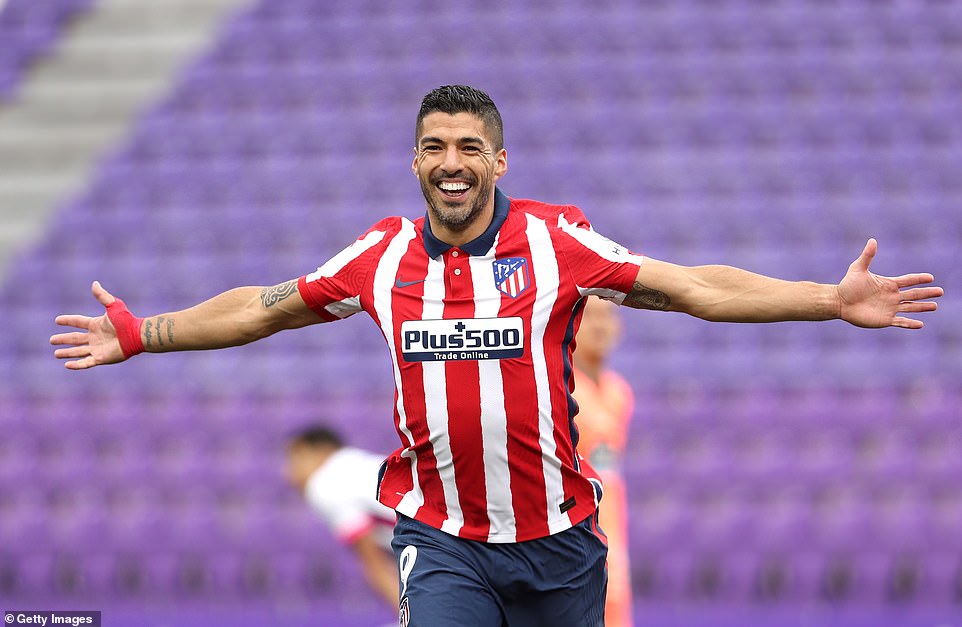 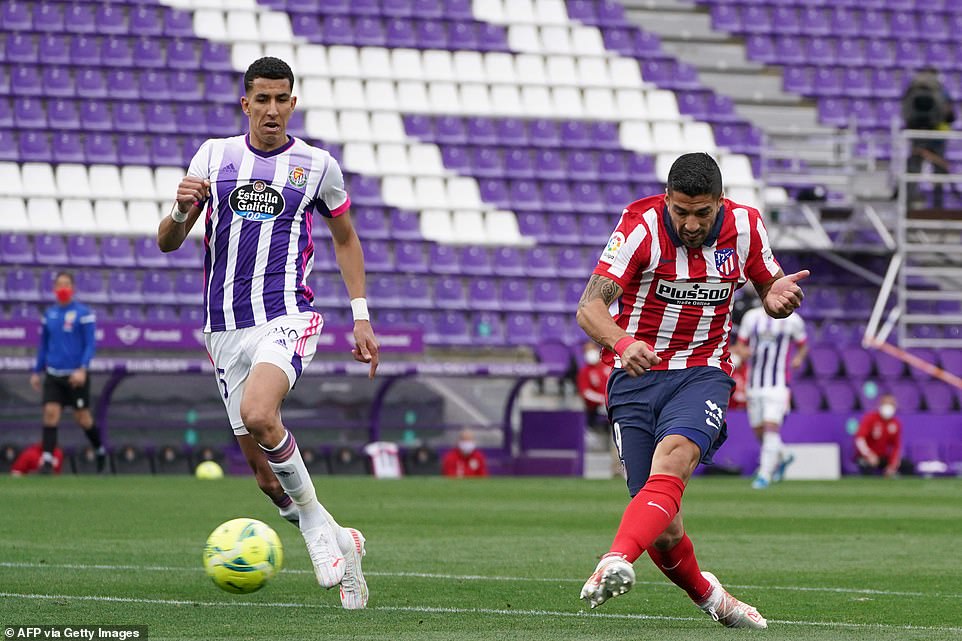 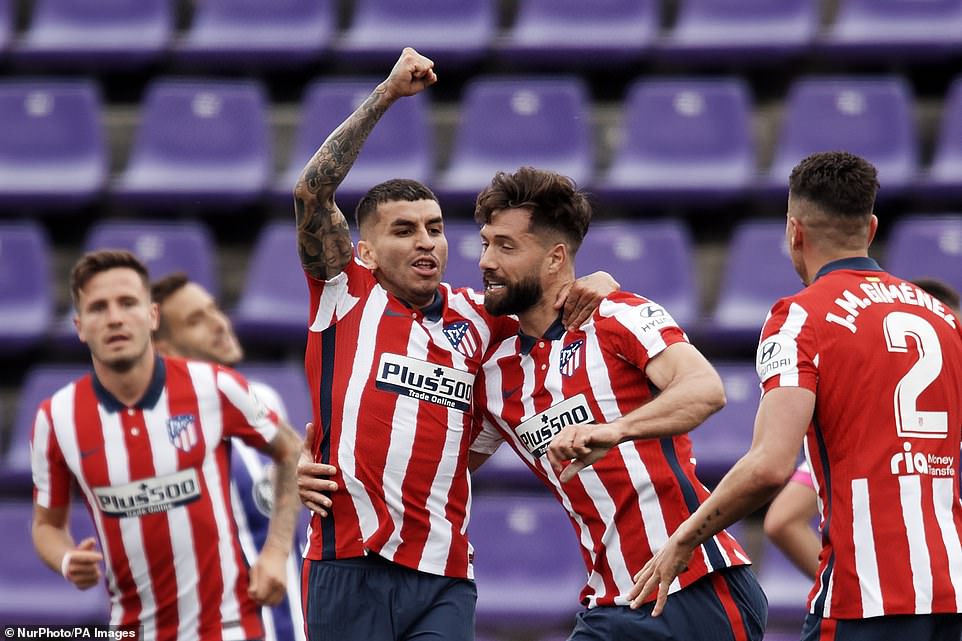 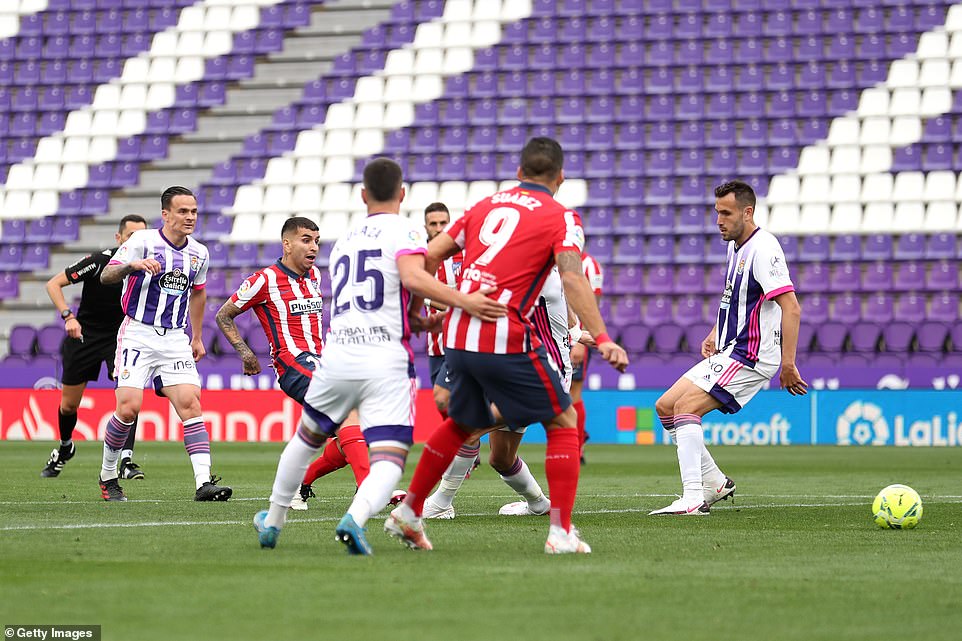 On a day that promised so much it couldn’t have started much worse for Atletico when Valladolid’s Oscar Plano collected the ball from inside his own half, showed all his pace to race clear on the counter before beating Jan Oblak at his near post.

Valladolid needed a win and then some help in their unlikely bid to avoid the drop and until minute 58 when Angel Correa brilliantly found a yard of space on the edge of the area to fire in for 1-1. There was hope that the Great Escape was on.

In the end, the true sign of a champion is being to get up after being knocked down and while Plano’s strike arrived as an early punch, Atletico were firmly on top from that moment. Suarez, himself scoring on the counter midway through the second half, appeared to deliver the knockout blow.

The celebrations were wild, every player rushing to the corner to mob Suarez for his divine intervention.

News of Real Madrid’s late goal, a winner from Luka Modric, could do little to ruffle any feathers as Atletico defended for all their lives.

Kieran Trippier made one such clearance late on that merited a roar of celebration similar to that of Suarez after the goal.

When the whistle went cries of ‘Campeones‘ rang out around the stadium and the tears flowed for those in red and white.

Atletico will get their hands on the LaLiga trophy at a private ceremony on Sunday at the Wanda Metropolitano but that news did nothing to put celebrations on pause on Saturday night.

‘The club is growing, the club has done a fabulous job,’ Simeone said.

‘It’s more important than the results. We have always been fighting everybody to win this trophy, this is what it is all about. It is such a unified club. I think people sometimes get bored of me and my approach but I am such a stubborn person. 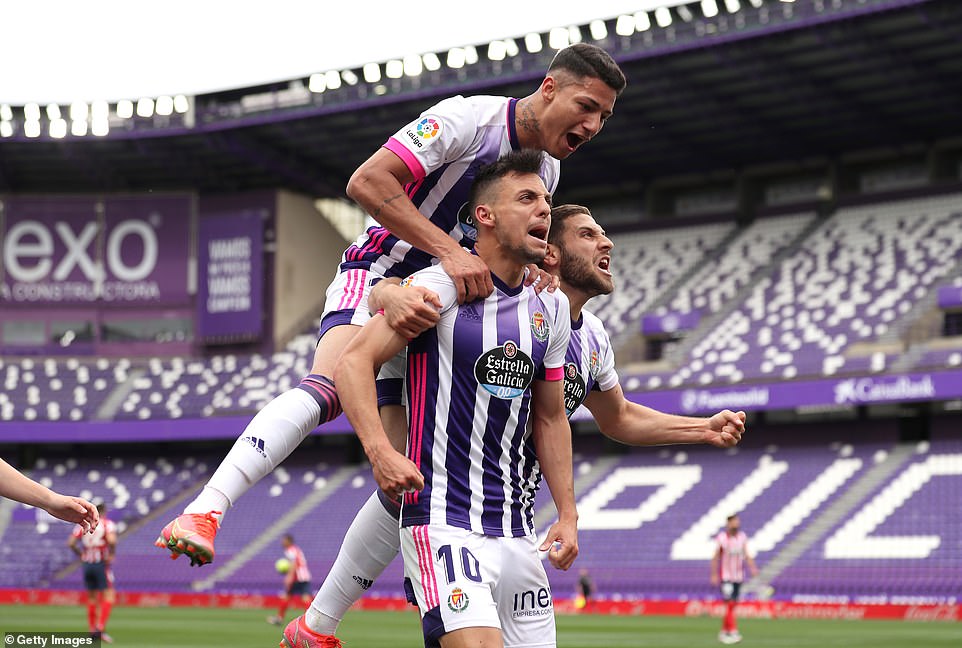 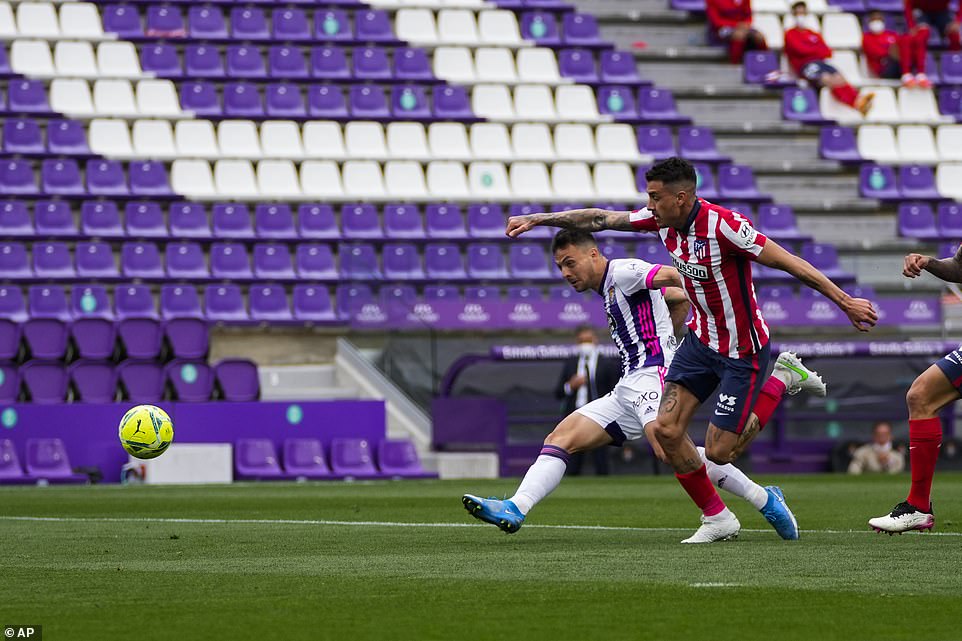 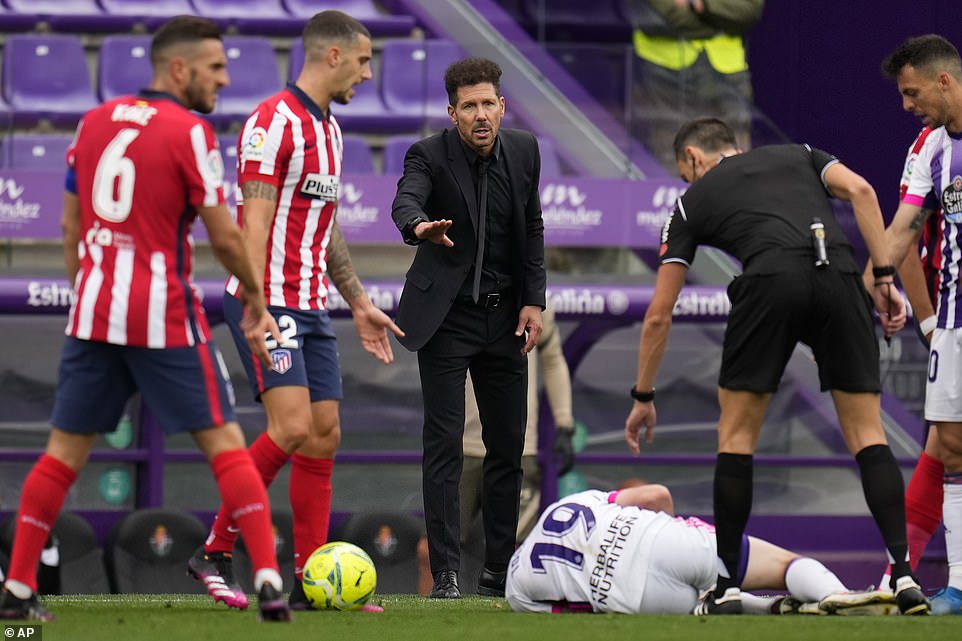 ‘When they asked me if I was going to stay, my idea was to help this club growing.’

On Suarez, Simeone added: ‘He’s Suarez. I said this a few days ago, maybe he was lucky, maybe I was lucky (with him joining), but that surname speaks for himself.’

The Uruguayan turned up with 21 goals this season, seven of which matchwinners, including the one that capped off the title at Valladolid.

Suarez was overcome with emotion as he stepped in front of the microphone for his interview.

‘Barcelona didn’t value me and Atletico opened their doors for me,’ he said, holding back tears. ‘I will always be grateful to this club for trusting in me.’

What must Barcelona be thinking having waved him off to a title rival last summer? It remains one of the most peculiar sales in recent LaLiga history – not that Atletico care too much.

Heads will roll now at both Real and Barcelona. Both could start 2021-22 with new managers. Both will be expected to make moves in the transfer market. Atletico will feel this period of disarray is there to be capitalised on. 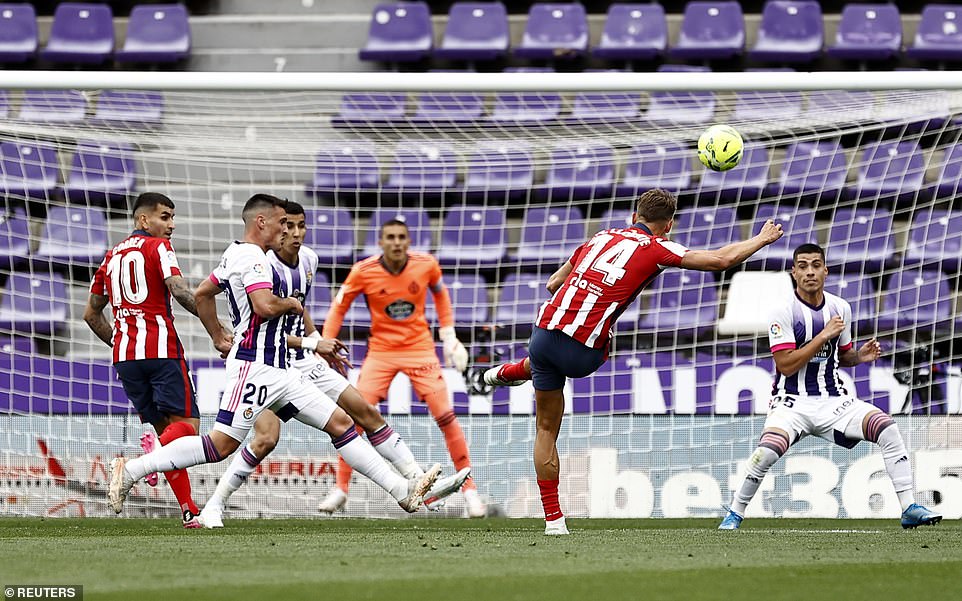 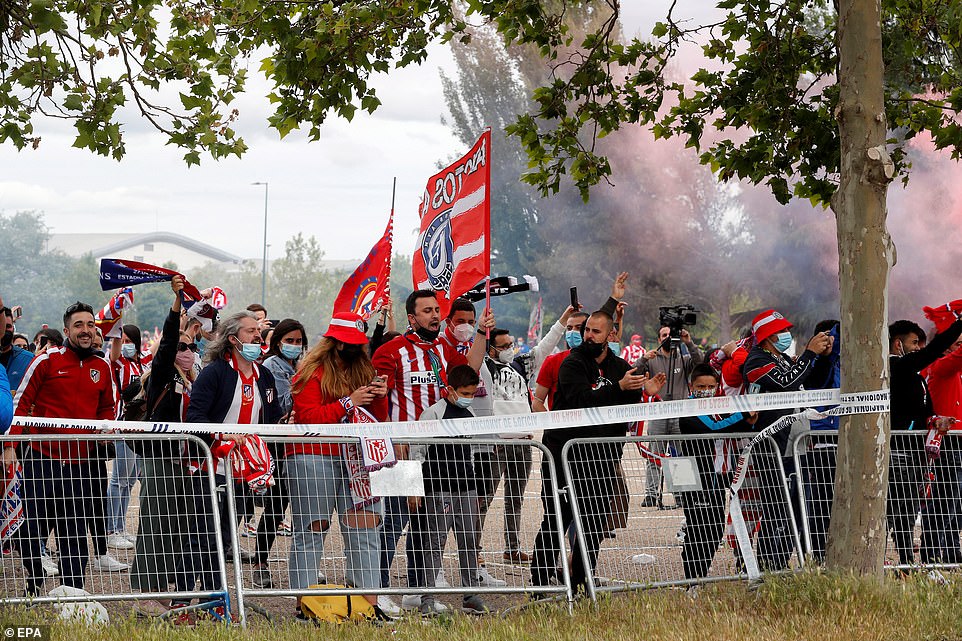 Can YOU unscramble these anagrams to get 22 different vegetables?