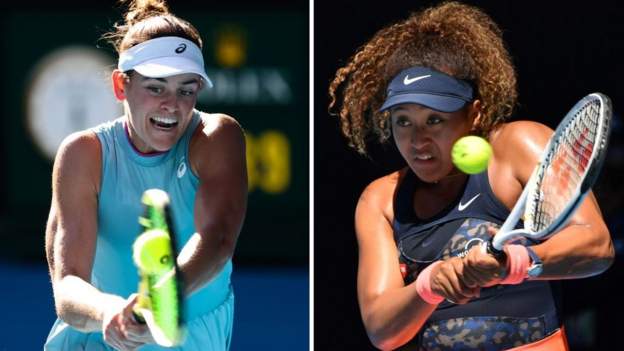 Naomi Osaka says a belief “people don’t remember the runners-up” will fuel her bid for a fourth major title when she faces American Jennifer Brady in Saturday’s Australian Open final.

Brady, seeded 22th, is in her first Slam final and looking to avenge defeat by Osaka in the US Open semi-finals.

“The winner’s name is the one that’s engraved,” said third seed Osaka.

“I think I fight the hardest in the finals. I think that’s where you sort of set yourself apart. The other person has won as many matches as you did. It’s the biggest fight.”

Osaka, whose major wins have come at the 2018 US Open, 2019 Australian Open and 2020 US Open, goes into the match as the heavy favourite against 25-year-old Brady.

It is a rematch of their high-quality semi-final in New York, which was widely considered as the best WTA match of 2020.

Brady had never gone past the fourth round at a Grand Slam before reaching the last four at Flushing Meadows and says she will have to keep her emotions in check in the Melbourne final.

“I don’t know how I’m going to feel. I can say I can enjoy the moment and just try to play tennis and not really think too much about it,” she said.

“But there are going to be moments where I’m going to be thinking ‘wow, this could be my first Grand Slam title’.”

Will Osaka make her experience count?

As well as her previous Grand Slam pedigree, Osaka holds a 20-match winning streak which goes back to early February last year.

On paper, she had a tough route to the Melbourne final but has swatted aside the likes of 23-time Grand Slam champion Serena Williams and 2020 Australian Open runner-up Garbine Muguruza.

She has yet to lose a Grand Slam match after reaching the quarter-final stage, but faces a different scenario on Saturday as the most experienced player.

“I feel like experience is important because you can draw on the things you didn’t think you did well in the past and memories,” Osaka told WTA Insider.

“But at the same time, I acknowledge that not having experience is also good because I didn’t have experience when I won my first Slam. There’s a certain hard-headedness that comes with not winning a Slam before. There are two sides to every story.”

Brady given belief by recent successes

Brady’s path to a maiden Grand Slam final has been unusual compared to most of her peers, having played in the American collegiate system before a relatively late progression to the WTA Tour.

She won her first tour title in Lexington shortly before the US Open and carried on that form to reach the semi-finals of a major for the first time.

Although she was edged out by Osaka, Brady left Flushing Meadows with added confidence she could challenge the world’s best on a regular basis.

“When I’m playing matches now, I’m never in doubt about whether I can win the match or not,” Brady told WTA Insider.

“I believe the match is on my racquet, that it’s within my control.”

In Melbourne, Brady has recovered from being one of the 72 players forced into a ‘hard’ quarantine after arriving in Australia.

She was not allowed to leave her hotel room for 14 days and said the experience contributed to her not having “high expectations” of success.

“Even before quarantine I didn’t think I would be where I am right now,” Brady said.

“I wouldn’t say I’m in disbelief. I think I have earned the right to be sitting here. I have put in a lot of work.”

But she added: “I think I used that two weeks to reset mentally and also physically, just give myself – my mind, my body – a little bit of a rest.”