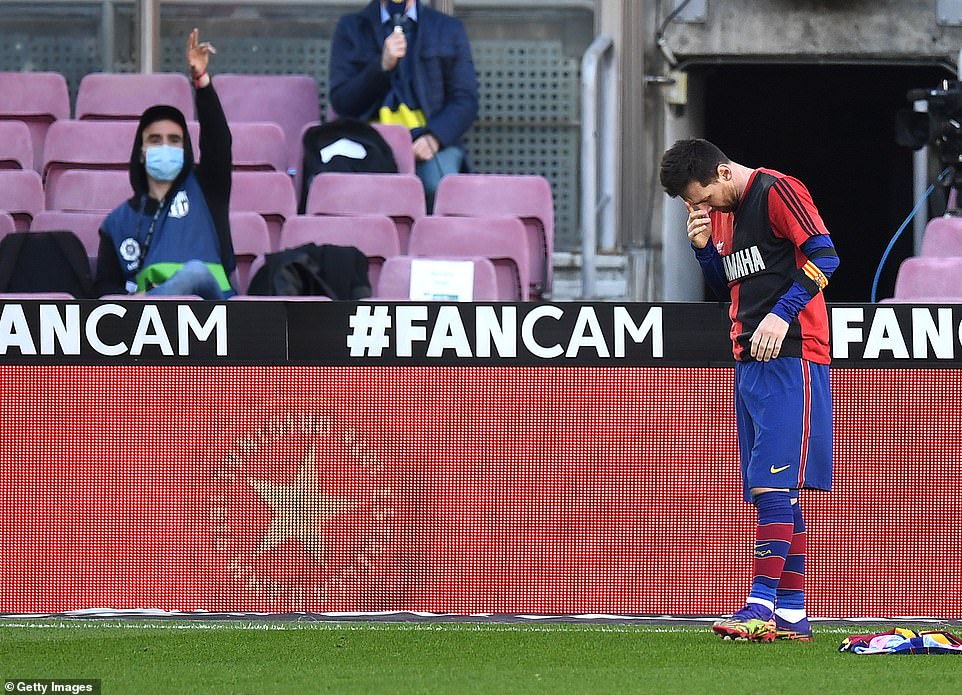 It had to happen. We could not have a weekend of Diego Maradona tributes without something special from perhaps the only player who has ever reached the same divine footballing heights.

Lionel Messi swerved away from three Osasuna defenders and, from the edge of the area, cracked a left foot shot into the top corner. After receiving the congratulations of his team-mates he peeled away from the group and took off his Barcelona to shirt to reveal the Newells Old Boys number 10 underneath.

Maradona played for Newells at the end of his career, Messi wore the same shirt at the start of his – it was the perfect homage.

The goal rounded off an impressive win for Barça marred only by an injury to Clement Lenglet. The undermanned centre of their defence is already without Gerard Pique for up to four months, now they must wait nervously while Lenglet has a scan on his right ankle.

Barcelona’s first chance came on 11 minutes when Unai Garcia cleared Philippe Coutinho’s shot off the line after the Brazilian had connected with an Antoine Griezmann pull-back.

Griezmann also had a shot saved by Sergio Herrera and pulled a shot wide after receiving a pass from Coutinho. Barcelona’s best players were looking more comfortable playing off of a centre-forward with Martin Braithwaite starting as the nine.

And the former Middlesbrough man is not just for back to goal lay-offs. He scored twice in midweek against Dynamo Kiev and he bundled in his third in five days from close range at the second attempt after Alba had crossed from the left.

Osasuna had their first half chances too. Jonny’s long diagonal into the box was volleyed over by Ante Budimir who scored twice at the Camp Nou last season for Mallorca. He also thought he had scored six minutes before half time but having turned in the rebound from Marc Andre ter Stegen’s save form Oier Sanjurjo’s header, the flag was raised because Oier had been offside.

Griezmann doubled the lead just before the break. Alba crossed from the left and when the ball came out to him he smashed a volley past Herrera in the Osasuna goal. It was his fourth of the season in all competition.

Coutinho made it 3-0 on 56 minutes and this time it was Coutinho with the finish. Griezmann won the ball back and fed Coutinho who tried to play in Braithwaite. Facundo Roncaglia came in with a thumping challenge but he cleared straight to Griezmann who selflessly teed-up the Brazilian to score.

Philippe Coutinho put the result beyond doubt, tapping into an empty net after more good work from Griezmann

Griezmann was involved in what looked like being the fourth as well. He played in Messi who tried to bundle his way through Osasuna’s defence. The ball ran to Francisco Trincao who played it to substitute Ousmane Dembele. The winger scored but VAR cancelled out the goal for offside against Trincao.

Before the goal Lenglet had hobbled off barely able to put weight on his ankle. It was now Oscar Mingueza and Frenkie de Jong in the centre of defence and Osasuna nearly took advantage but Roberto Torres’ shot came back off the post. With Barcelona comfortable all that was missing was a Messi goal. Sweating in that Newell’s shirt under his Barcelona who pulled the rabbit out of the hat with 18 minutes to spare.

He was happy with his fourth goal in the league and his seventh in all competitions. But happier still to be able to pay tribute to the only other footballer who knew what it was like to be the Argentina number 10 and the world’s number one.

The best Black Friday and Cyber Monday TV deals you can still get on LG, Sony, Samsung, TCL and more