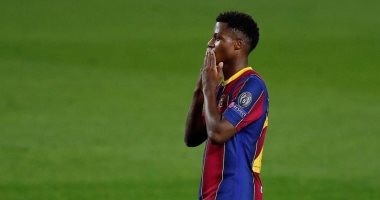 Spanish press reports revealed today that there is a lawsuit awaiting Ansu Fati, the Barcelona player, because of his former agent.

The Catalan newspaper, “Sport”, stated that the player owes Francesco Draginho, his former representative, his commission for the work done during the renewal of the youth player in July 2019 and the subsequent upward review of the same contract in December of the same year, and that he did not fulfill the amounts agreed between all parties amounting to more From half a million euros.

The newspaper added that Fati’s agent had been helping the footballer’s father financially on many occasions, when the family was going through a difficult economic situation

The Barcelona winger is preparing to return to Barca, after being absent from the team since last November, after suffering a severe knee injury.

According to the newspaper “Sport”, Ansu Fati will return to Barcelona’s list for the first time, against Levante in the match scheduled for next Sunday, in the seventh round of the Spanish League competition.

She also added that Ansu Fati has reached the stage of readiness required to participate in the matches with Barcelona, ​​after completing the rehabilitation process for his injury and returning to the Blaugrana training.

She explained that Ansu Fati was supposed to join the Barcelona squad against Cadiz, in the match, which will be held at ten in the evening, Thursday, in the sixth round of the League, but Ronald Koeman, coach of the Catalan team, preferred not to risk him and return to Levante.

While there are Spanish press reports that revealed that Barcelona lost its confidence in the Dutch coach, Ronald Koeman, because of the lackluster results achieved by the Blaugrana under his leadership, and that his dismissal from the Barca coach became a matter of time.

According to the Spanish newspaper “AS”, Koeman, who seemed confused in the Cadiz meeting, lives these days amid uncertainty, anger and helplessness, and does not know when the club will take the final decision to dismiss him.

The newspaper added that in the past two weeks, Koeman noticed that he had become more confused since his arrival in Barcelona, ​​​​because of his knowledge that the Catalan club’s management intends to leave him from training the team.

She indicated that Xavi Hernandez, the legend of the team, is the most likely candidate to take over the technical leadership of the Catalan club, during the coming period.

It is worth noting that Barcelona is in eighth place in the Spanish league standings, with 8 points.