Besiktas makes an official offer to include Mohamed Elneny

Turkish press reports revealed today, Thursday, that negotiations had begun between the Turkish club Besiktas and his English counterpart Arsenal in the past hours in order to resolve the transfer deal for Mohamed El-Nini, the Egyptian midfielder, before the transfer market was closed..

According to the newspaper “Milliyet” The Turkish club, Besiktas, has submitted an official offer to its English counterpart, Arsenal, to obtain the services of the Egyptian international, Mohamed Elneny, before the transfer market was closed.. 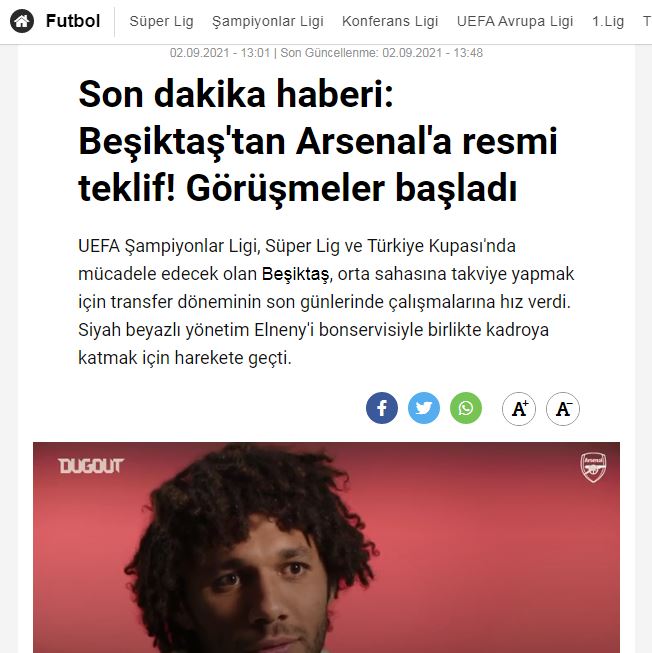 The transfer market in Turkey ends on September 8, and there is an opportunity for Besiktas to sign Mohamed Elneny at the request of the coach, Sergin Yalcin..

Besiktas’ strong interest in the return of his former player comes in conjunction with the desire of his rival and rival Galatasaray, the professional in his Egyptian international ranks, Mustafa Mohamed to include Elneny..

According to the newspaper, Besiktas club submitted an official offer to Arsenal to sign the player due to the competition between him and Galatasaray..

The two clubs are seeking to resolve the Mohamed Elneny deal before tomorrow morning, Friday, September 3, and close the European registration date from “UEFA” in the Champions League and European League..

Besiktas is participating in the Champions League, while Galatasaray reached the group stage of the European League.

Galatasaray club intends to pay an amount ranging from 3 to 4 million euros to Arsenal to join Elneny, especially since the contract of the Egyptian pharaoh ends in June 2022.

Nevada man was tortured for hours and forced to walk off cliff, then shot as 3 charged in his murder