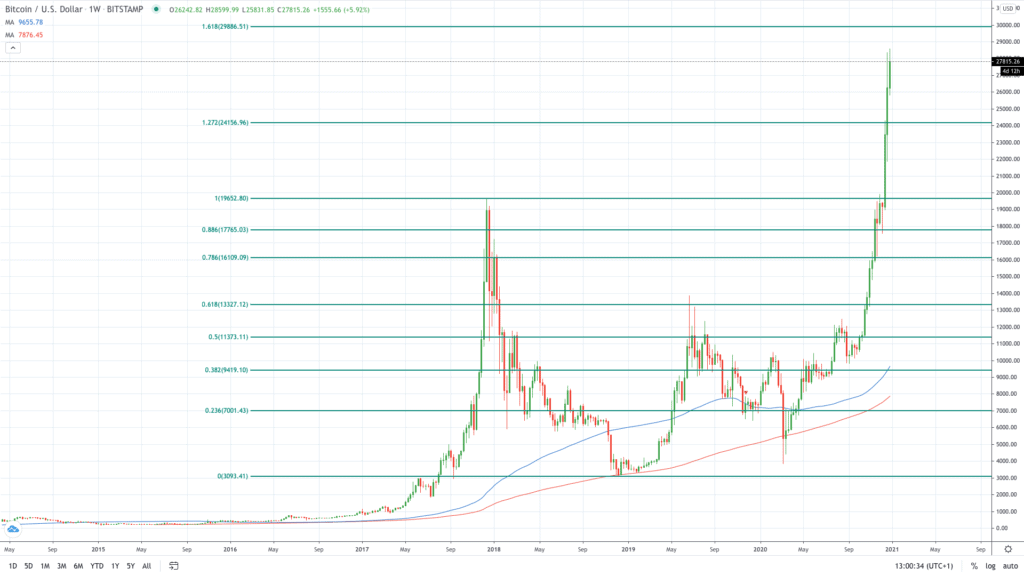 Bitcoin (BTC) price touched yet another all-time high on Sunday, breaking above the $28,000 mark for the first time ever. However, some analysts suggest that the world’s biggest cryptocurrency could lose its momentum at the start of 2021.

“It is still quite bullish on an intermediate-term basis given that it just broke out to new all-time highs,” Newton said.

“I think we have a ways to go. Near term, my cycle composite shows us peaking out in early January.”

The cryptocurrency’s weekly chart and technical indicators point to a surge in interest, mostly among institutional investors, he added. Also, google search numbers for Bitcoin increased by 750% compared to the same period last year, but still far away from its peaks three years ago.

″[With] SPACs right now, you can make money at 10, 15, 20% a day,” he said. “I just don’t think that investors have quite the appetite for crypto while the institutions are certainly very much heading in that direction,” Newton said.

According to his charts, Bitcoin’s current uptrend might change direction soon. He added that he’s planning to sell his long positions in Bitcoin, Ethereum and other cryptocurrencies in upcoming weeks.

“I think there will be some opportunity to buy dips into Q1 of next year,” he said.

Managing director of Forex strategy at BK Asset Management Boris Schlossberg said a rise in interest for Bitcoin among institutional investors is a good sign for the cryptocurrency.  Those who intend to trade Bitcoin in future must know that it has a huge amount of volatility, Schlossberg said, saying he believes Bitcoin will go as high as $50,000.

Technical analysis: Where next?

Bitcoin price is trading over 1% higher today after hitting an all-time high at $28.600. This is reminiscent of December 2017 when the price action printed all-time highs before correction sharply lower in January.

In this case, an apparent target for BTC buyers is $29,900 – a 161.8% Fibonacci extension line that is used to measure targets above broken resistance. Therefore, BTC/USD could hit this level before pulling back on profit-taking. Immediate support is located just above the $24,000 mark.

Bitcoin surged north of $28,000 on Sunday, hitting another all-time high but charts suggest that the cryptocurrency might see a change in its direction in early January.

Popular Analysts Believe Bitcoin Price Will Be $50k in 8 Weeks!!!!

Popular Analysts Believe Bitcoin Price Will Be $50k in 8 Weeks!!!!