You WON’T need a Covid passport to visit the pub: Boris Johnson shelves plans to bring in controversial ‘certification scheme’

Boris Johnson has shelved plans to introduce Covid passports in pubs and restaurants this summer.

The Prime Minister has shifted the focus of the controversial scheme away from the hospitality sector, government sources have said.

Officials have been ordered to concentrate instead on devising a system that will enable foreign travel and the reopening of sectors like theatres, sports venues and nightclubs. 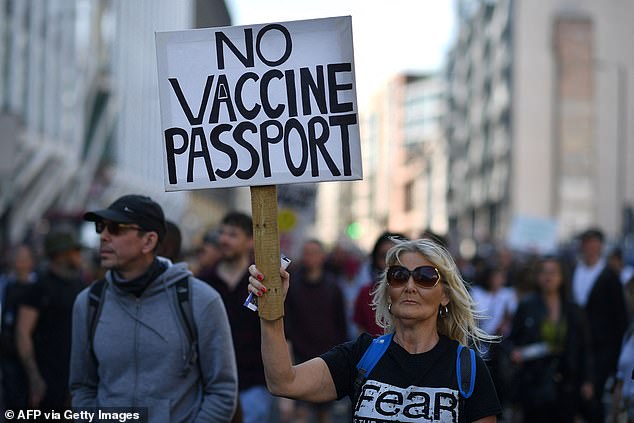 The Prime Minister has shifted the focus of the controversial scheme away from the hospitality sector after furious backlash from Tory MPs and parts of the hospitality industry. Pictured: Demonstrator at an anti-lockdown protest in London on Saturday

The move follows a furious backlash from Tory MPs and parts of the hospitality industry about the idea of forcing people to produce ‘papers for the pub’.

The PM floated the idea of extending a new ‘Covid certification scheme’ to the hospitality sector last month, saying it ‘should not be totally alien to us’.

And officials suggested that venues deploying the policy could be allowed to relax social distancing rules in return.

But with political opposition mounting and the virus in retreat, Mr Johnson is understood to be turning against the idea.

One government source said: ‘I would be amazed if we introduce Covid certification for hospitality this summer. The focus is more on big events and reopening sectors that we struggled to open last year.’

The Prime Minister hinted at the shift in thinking last week, saying: ‘What we are looking at – what I think any responsible government would look at – is how we use people’s Covid status to open up those things that are very tough and did prove very tough to open last year.’ 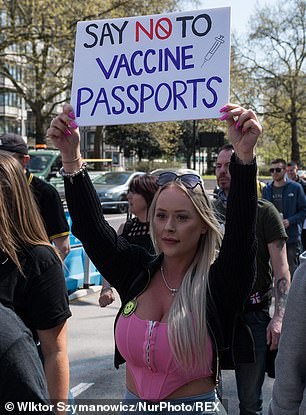 With political opposition mounting and the virus in retreat, Mr Johnson is understood to be turning against the idea. Pictured: Demonstrator at an anti-lockdown protest in London on Saturday

However, sources acknowledged that any scheme could be extended to the hospitality sector if there is a surge in cases later this year.

Leading sports bodies – including the Football Association, the Premier League, the England and Wales Cricket Board and the Lawn Tennis Association – have urged ministers to investigate a Covid certification scheme if it is the only way to get venues full this summer.

Any scheme would also allow people to show they have had Covid in the previous six months or that they have had a recent negative test, instead of producing their vaccination status.

It comes as ministers have faced renewed calls to ditch all social distancing rules in June. In an open letter yesterday, a string of prominent scientists said the Government should focus on the vaccine success and lift the restrictions.

Signatories include Professor Robert Dingwall, who sits on a sub-committee of the Government’s Sage group, and Professor Carl Heneghan, director of Oxford University’s Centre for Evidence-Based Medicine.

But one government adviser disagreed with their calls to lift the rules. Professor Stephen Reicher, of the University of St Andrews, warned: ‘The Government delayed taking action in the autumn. Infections soared and we had to impose harsher restrictions for longer. Don’t let these siren voices lead us back into lockdown again.’

The one word women need to be saying more often