Brazil strengthens its lead in the World Cup qualifiers with a goal in Chile.. Video 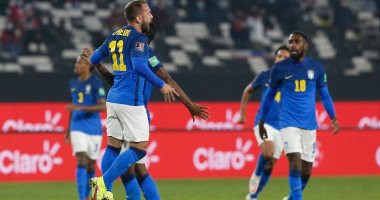 Brazil continued its impressive results in the South American qualifiers for the 2022 World Cup in Qatar, after reaching its seventh consecutive victory at the expense of its host Chile, with a clean goal, in the meeting that brought them together in the early hours of Friday morning, at the “Monmental David Orlano” stadium. In the capital, Santiago, in the ninth round of the qualifiers.

The first half of the meeting came at an average level on the part of the two teams, although the Brazilian team had more control over the ball, which failed to translate it into goals.

In the second half, Everton Ribeiro scored the goal of Brazil’s victory in the match in the 64th minute, after following a rebound from Claudio Bravo, Chilean goalkeeper.

The Seleção team will host its Argentine counterpart in the Super Clasico, at 9:00 pm, next Sunday, in the qualifiers for the 2022 World Cup.

In the same round, Uruguay drew 1-1 with its host Peru, in the meeting that brought them together on the same date as Brazil’s match against Chile.