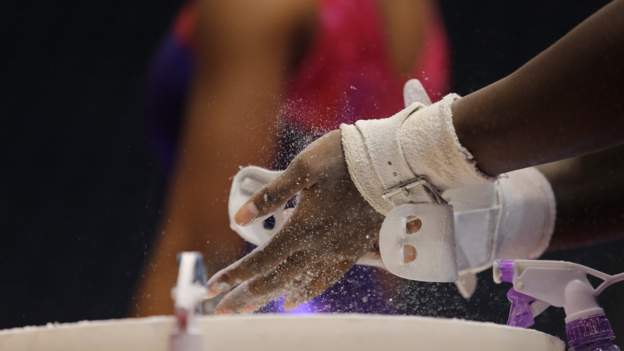 A group of 17 women and girls are to start legal action against governing body British Gymnastics over alleged physical and psychological abuse.

The group, of current and ex-gymnasts aged between 15 and 43, complain about the conduct of coaches and people employed by clubs across the UK.

Nicole Pavier is among the claimants and said she hopes the move “ensures the safety of future generations”.

An investigation into allegations of abuse at British Gymnastics is ongoing.

The review, being overseen by Anne Whyte QC, is continuing alongside an investigation into the conduct of British Gymnastics’ head national coach Amanda Reddin. She stepped aside from the role in August last year.

Sarah Moore, a partner at the law firm Hausfeld who is representing the women, said “this is not a bad apple problem”.

British Gymnastics said: “It would not be appropriate or fair to all parties for us to make any comment until we have had the opportunity for it to be fully considered.”

Claims relate to athletes who were aged between six and 23 at the time of alleged mistreatment.

Allegations of physical and psychological abuse include:

It is alleged “in almost all cases” athletes have suffered with depression, anxiety, post-traumatic stress disorder, as well as an obsessive-compulsive disorder, which “continue to afflict many of the claimants to this day”.

Lawyer Moore said the 17 she represents want to see “better safeguarding, better transparency” and a move away from the “winning at all costs motto”, but she also added the financial compensation will be “important”.”It may enable them to access therapies and other physical aids they now need as a result of the physical harm they’ve suffered,” she told BBC Sport.

Pavier said she has gone down the “legal route” because she does not “have faith that British Gymnastics will take it seriously”.

“There are a lot of us, our voices are far stronger together than they are apart,” she said. “They can’t ignore the amount of us that are talking now.”

British former Olympic gymnast Jennifer Pinches, who set up the Gymnasts for Change campaign group last year, said the prioritisation of “podiums over people” by the governing body “has led to untold damage to the lives of young people”.

She added: “This is just the beginning of the sweeping changes that we are demanding, and the justice that we will fight for.”

Fortnite Surface Hub Locations: Where to Scan a Server