Having a whale of a time! Incredible drone footage shows the moment a pair of huge Bryde’s whales catch waves with surfers near Byron Bay

Two Bryde’s whales have been filmed riding waves with surfers at a popular beach near Byron Bay.

Sydney photographer Daniel Cook, 43, used his drone to film the 12-metre whales from above at Seven Mile Beach near Lennox Head, south of Byron, on Wednesday.

The whales, which weigh 12 to 20 tonnes each, were joined by a pod of dolphins in hunting a large school of bait fish while surfers caught waves above them.

But eventually, the whales decided to catch some waves for themselves, using the momentum to propel them into the school of fish. 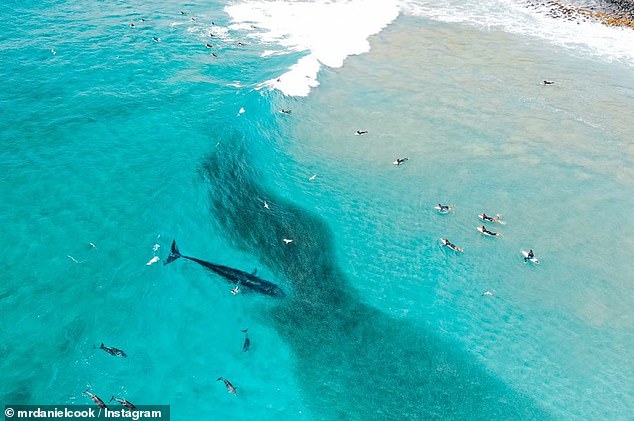 A Bryde’s whale catches a wave into a school of bait fish, which is the black part of the water. A pod of dolphins and surfers can also be seen swimming nearby on Seven Mile Beach near Lennox Head, south of Byron Bay, on Wednesday

Speaking to Daily Mail Australia, Mr Cook said filming the whales was a ‘one in a million moment’ that completely happened by chance.

‘It was totally a coincidence. We had a road trip up to Byron last week and decided to drop into Lennox Head on the way back,’ he said.

‘We were looking at the surfers and saw a pod of dolphins, so my partner thought it would be a good idea to get the drone up and film them.

‘While I had the drone up, she called out and said “there’s a whale out there!” And the whale just came into the shot.’

In Mr Cook’s footage, surfers had to move out of the way for the surfing whales, which lifted their tails and their bodies above the surface of the water. 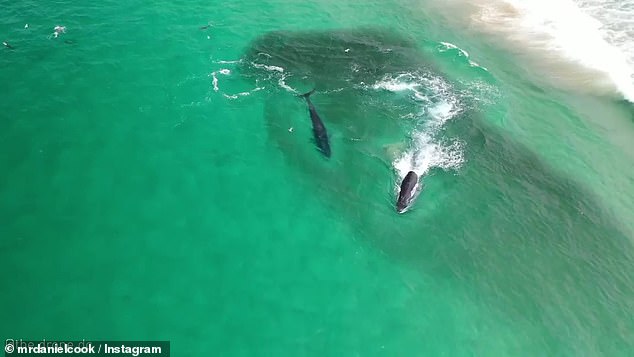 The two Bryde’s whales cut swathes through the school of fish in a feeding frenzy. Dolphins can also be seen swimming in the top left

Despite the close calls, the photographer said everyone kept a safe distance and no one was hurt.

‘It was just amazing to see how the surfers came into contact with the whales,’ Mr Cook said.

‘I don’t think anyone actually touched the whales. Everyone was pretty mindful of the dolphins and whales near them.

‘I got footage of a surfer trying to catch a wave but one of the whales undercut him so he had to let it go.’

Mr Cook initially thought the marine mammals were Minke Whales but experts have since informed him they are Bryde’s whales (pronounced Broo-dus). 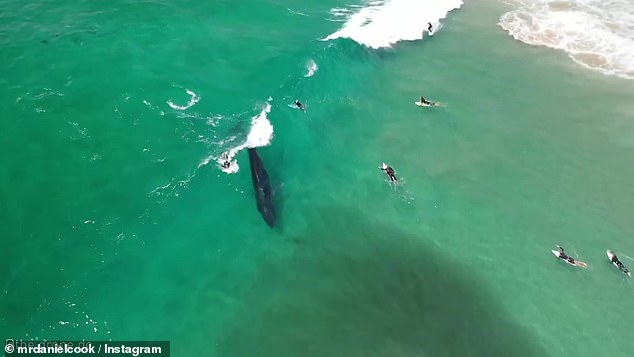 A Brydge’s whale undercuts a wave from a surfer, forcing the human to give way as it propels toward a school of fish, which is the dark spot in the water

Mr Cook began drone photography four years ago to give him freedom after a back surgery.

‘It’s pretty special because this just all started out as a hobby for me. My partner bought me a drone after I had back surgery,’ he said.

‘I couldn’t move much, so having a drone was just a means of me getting out of the house and taking some photos.

More of Mr Cook’s ocean photography is available on his Instagram The Drone DC. 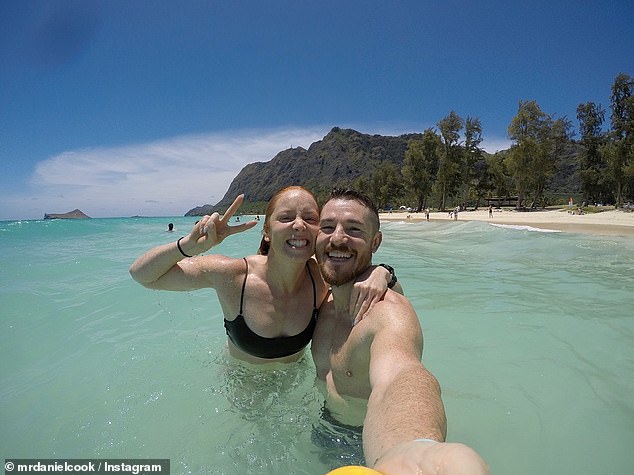 Mr Cook (right) and his partner Emily (left). Emily bought Mr Cook a drone after he had back surgery four years ago to get him out the house. He said it was ‘pretty special’ to capture amazing whale footage from his humble hobby