A carer who grabbed a suspected burglar he spotted on a street plagued with break-ins and suffocated him by kneeling on his back for nine minutes during a citizen’s arrest, while waiting for the police to arrive, has been cleared of manslaughter.

Craig Wiltshire, 43, suffered a cardiorespiratory arrest when Nathan Smith, 38, tackled him in the street and pinned him down in a suburb of Bristol in the early hours of November 20, 2019.

The court was told Smith knelt on Mr Wiltshire’s back for nine minutes and refused to ease off even when the victim twice told him he could not breathe, telling him ‘I don’t give a s*** what you can and can’t do’.

CCTV footage shows Smith pouncing on Mr Wiltshire, who is riding on a bicycle, before pulling him to the ground and kneeling on him.

Mr Wiltshire died in hospital two weeks after the incident on December 4.

Smith denied wrongdoing, claiming he believed Mr Wiltshire was ‘pretending’ to be in distress so he would release him and he could escape.

Mr Wiltshire was believed to have been behind a string of thefts and break-ins in the Bristol suburb where Smith was employed as a live-in carer, the court was told.

Despite repeated complaints to the police, the thief was never caught and there was no active police investigation into the break-ins.

Today, a jury at Bristol Crown Court cleared Smith of manslaughter after four hours and seven minutes of deliberations.

The incident happened six months before George Floyd died when three police officers pinned him to the ground and knelt on his neck in Minneapolis in May 2020. 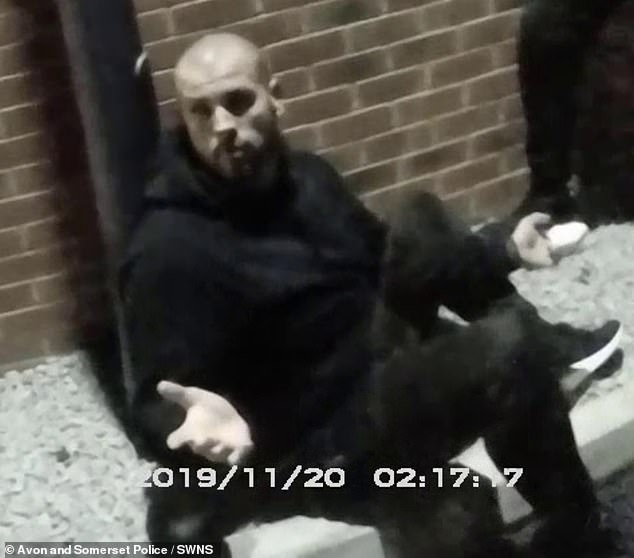 In police bodycam footage, Nathan Smith is seen talking to an officer about pinning down the suspected burglar 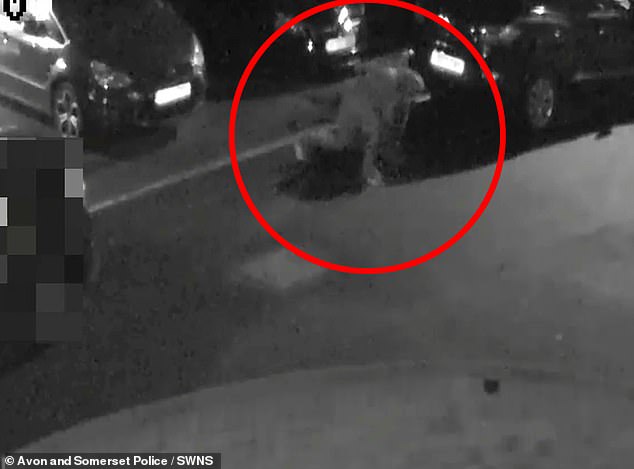 CCTV footage played for the jury showed the moment Smith ran up to Mr Wiltshire, who was on a bicycle, believing him to be a thief 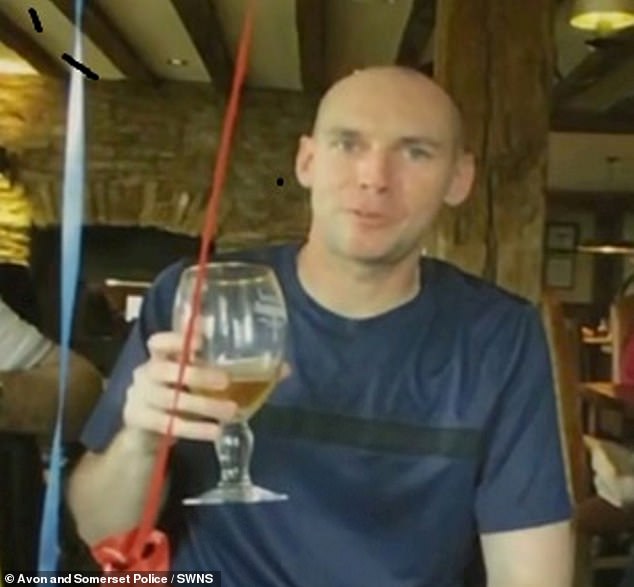 Craig Wiltshire (pictured) suffered a cardiorespiratory arrest when he was tackled to the street and pinned him down in a suburb of Bristol in the early hours of November 20, 2019

A post-mortem carried out after Mr Wiltshire’s death found he had the sedative diazepam and the heroin-substitute methadone in his system and a pre-existing heart condition.

Smith said he did not know Mr Wiltshire was vulnerable to cardiorespiratory arrest, and that he did not know leaving someone in the prone position for a prolonged period of time was dangerous.

The prosecution had claimed Smith was angry with Mr Wiltshire, and that he took the opportunity to punish him for his alleged crimes.

Video footage, today released by the Crown Prosecution Service and shown to the jury during the trial, shows the moment Smith apprehends Mr Wiltshire.

The suspected burglar is seen riding on a bicycle before Smith appears from behind and pulls him to the ground.

After a few moments, Smith is seen on top of Mr Wiltshire, who is by now kicking his legs out before the clip ends.

A reverse angle also shows Smith catching up with Mr Wiltshire and pulling him from his bicycle and onto the ground out of sight behind some parked cars. 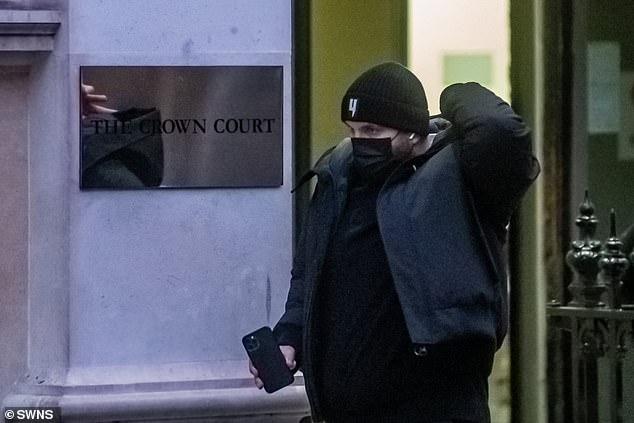 Nathan Smith pictured outside Bristol Crown Court. Smith restrained Craig Wiltshire for 12 minutes before police arrived, and for nine of those minutes he had his knee on his back 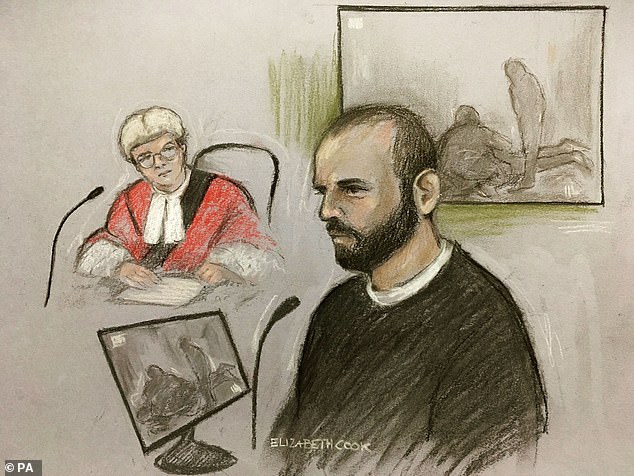 Court artist sketch of Nathan Smith, 38, watching video footage in the dock at Bristol Crown Court, where he was accused of the manslaughter of Craig Wiltshire

Your rights on performing a citizen’s arrest

Under section 24A of the Police and Criminal Evidence Act 1984 (PACE), a person can make a citizen’s arrest if:

Indictable offences refer to crimes which are considered more serious and may be tried in the crown court and include violent assaults and burglary.

The ‘reasonable grounds’ are assessed objectively. An individual may make a citizen’s arrest if the person is either: causing serious injury to themselves or others; suffering serious injury; causing damage or loss of property; or escaping before police arrive.

When making a citizen’s arrest, the person must inform the suspect what they are doing and tell them what offence they believe they have committed.

The person making the arrest is only able to use ‘reasonable force’.

The apprehended person must then be taken to a police station or magistrates, otherwise it will not be legally valid.

In his closing speech to the jury yesterday, Smith’s barrister David Hughes said: ‘Nathan Smith did not go out as a vigilante to exact revenge or to mete out punishment.’

He described the arrest as a ‘public-spirited’ act, adding that Smith was described by witnesses as a valuable and decent member of the community.

‘In his evidence he said the last two years have been the worst of his life, he was previously happy and now has regular visits to the doctor and has been prescribed antidepressants, and his general mood has been sad,’ Mr Hughes said.

He said ‘there are no winners from the events of the early hours of November 20 2019’.

Prosecutor James Ward cited insults hurled by Smith at the victim including calling him a ‘f****** piece of s***’ as proof he wanted to hurt him.

But Smith replied: ‘I was being loud so other people would come, I didn’t want to shout ‘help’ so he knew I needed help, and I wanted to make him think I was more in control than I was.’

He insisted he was not angry or trying to punish the victim, adding: ‘I just wanted the police to come and get him.’

Smith said Mr Wiltshire had been reaching for his pockets, and he feared he had a weapon on him.

Kimberly Lock, a neighbour, said the community had been ‘terrorised’ by the break-ins, and had extra locks fitted to her house, including a sliding bolt to her bedroom.

An expert in forensic and legal medicine told the court he did not think Smith’s method of restraint, as a member of the public with no training, was inappropriate.

Professor Jason Payne-James added: ‘In terms of the persistence of the prone restraint, I believe that would have been inappropriate if police personnel had continued that for that length of time without moving or monitoring (Mr Wiltshire).’

But Professor Payne-James agreed it was likely the victim would have survived if he had been sat up or rolled on to his back at the point he told Smith he could not breathe.

Smith’s employer Michael Crooks is seen in CCTV footage adding his weight to Mr Wiltshire for a few minutes, while his son Ben Crooks is seen kicking the prone man twice.

They both admitted a charge of common assault and were not charged with manslaughter.

The jury was told to assume Mr Wiltshire was the man suspected of committing burglaries in the neighbourhood over the previous weeks, and that the arrest was not a case of mistaken identity.

After the verdict, Detective Superintendent James Riccio of Avon and Somerset Police said: ‘This has been an extremely complex and sensitive investigation into the death of a 43-year-old man.

‘Members of the jury have listened to all the evidence and concluded Mr Smith is not guilty of manslaughter. We respect and accept the jury’s verdict.

‘Mr Wiltshire’s family have been supported throughout by a specially trained liaison officer.

‘We recognise these legal proceedings will greatly impact the affected community and we would urge anyone with worries or concerns to speak to their neighbourhood policing team.’

Ripple achieves record valuation of $15B

Ripple achieves record valuation of $15B