This is the moment a group of youths started brawling in the street around the time that two teenage girls aged 16 and 17 were stabbed.

Five youngsters were seen on CCTV walking down the backstreet in West Norwood, South London, when they were attacked by another group off camera yesterday afternoon – but it is unclear if the two incidents are linked.

One youth lashed out at an unseen rival, prompting friends to get involved who were seen punching and kicking out at others just out of shot as onlookers watched.

The older girl was taken to hospital by air ambulance which landed on the roof of a nearby B&Q. Her condition was initially life threatening but she is now serious but stable. The younger girl did not suffer life-threatening injuries.

Both girls appeared to have been stabbed in the torso below the shoulder. Scotland Yard said four boys, aged between 16 and 17, were arrested on suspicion of attempted murder. One has since been released with no further action, while the other three remain in custody.

It comes as one witness claimed the girls were stabbed after dropping off a PlayStation 4 console and an iPhone at his electronics repair shop, saying they had been waiting at the store to get the devices tested. 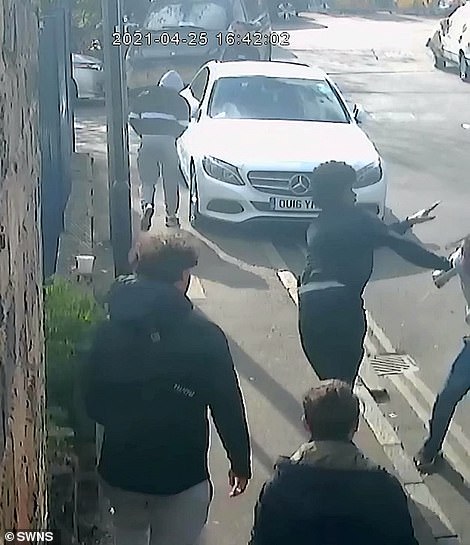 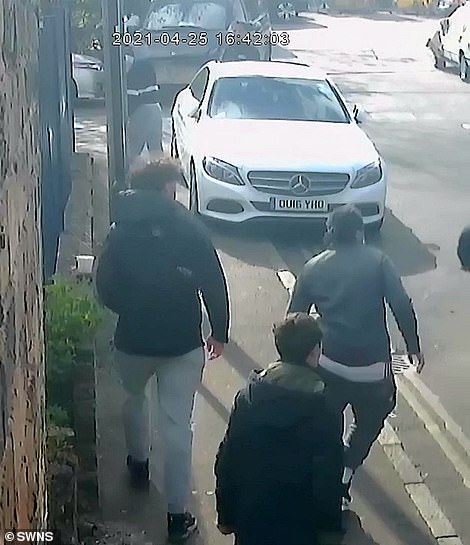 Five youngsters were seen on CCTV walking down a backstreet in West Norwood, South London, when they were attacked by another group off camera yesterday afternoon 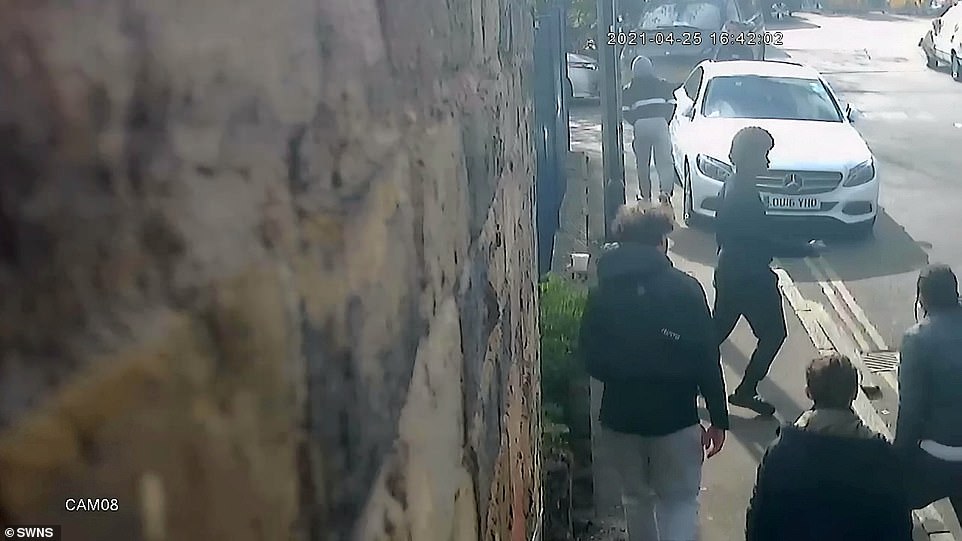 A CCTV camera at Efes Restaurant, a nearby takeaway, had been filming Waylett Place and captured the scene yesterday

A nearby security camera caught the fight yesterday at 4.42pm in Waylett Place, just off the A215, a busy parade of shops and restaurants on Norwood Road.

A CCTV camera at Efes Restaurant, a nearby takeaway, had been filming Waylett Place. The two girls are said to have made their way onto Norwood Road, before one of them collapsed at a bus stop, according to eyewitnesses.

The video shows a group of at least four young men in the street. One of them is seen to run away. Jahanzeb Tarakhial, 27, who runs the fast food restaurant, said: ‘I was here serving customers and I saw people outside.

‘When I came out I saw a girl on the floor and another was sitting at the bus stop. Two police cars arrived on the scene first and then more came. It’s not OK that two girls are injured with a knife. Obviously it was very shocking.’

Lukeland Brown, 54, told how he helped one of the stabbed girls as she fainted in his arms. The girl had been on the phone to her mother at the time telling her that she had been attacked.

Mr Brown, from Streatham, was having his car repaired in West Norwood when the violence flared. He said that three teenage boys ran off from the scene, with one shouting ‘lesbian’ as an insult to one of the girls.

The father of four said: ‘The most seriously injured girl was on the phone to her mother, saying that she was in Norwood and had been stabbed.

‘While she was on the phone, she asked me to check her back as she had a lot of pain. I did so carefully and saw that there was a big lump where a stab wound was. She had suffered some internal bleeding.

‘A few moments later she fainted and I helped her gently to the pavement and put her on her belly because she’d been stabbed in the back. She had another stab wound under her arm pit.

‘Her friend was moving strangely like she had also been stabbed. I asked a woman at the scene to check her over and she was able to confirm that she’d been stabbed once.

‘I’d seen three young boys run off up the road. Before the girl I helped fainted she said she knew them as they came from the same area she did. 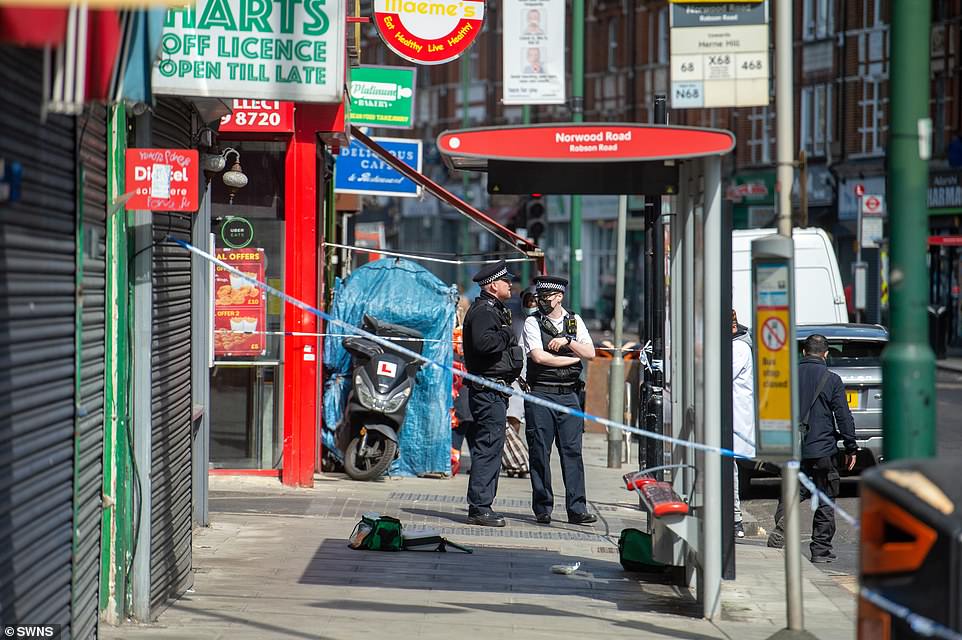 Police officers at the scene today after two girls were stabbed in West Norwood, South London 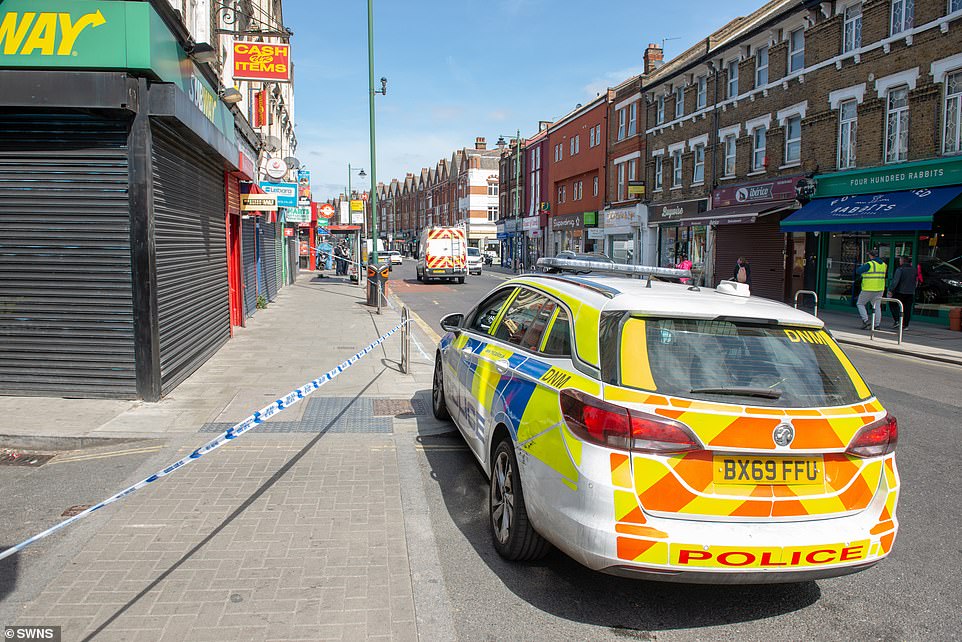 ‘As the boys ran off, one of them shouted out the word ‘lesbian’, I think it’s because one of the girls was dressed like a boy. The boys then dispersed in different directions.

‘I called the ambulance and they arrived pretty quickly. It’s getting very dangerous in this area.’

A worker in a nearby butcher’s said: ‘I didn’t hear or see any fighting or arguing. Whatever happened, happened in the side road behind us. I just saw a lot of police run past.

‘And when I came out the shop, one girl was on the floor bleeding and her friend was sat on the bus stop. Both looked to be conscious but they didn’t say anything. They were surrounded by people who came to help.’

Three youths were seen fleeing the scene as witnesses tried to stem the girls’ bleeding. One man who owns an electronics shop, just feet from the scene, said: ‘I didn’t see what happened, but the girls were here in the shop.

‘The two victims were captured on the shop’s CCTV while they waited for their PS4 and iPhone 8 Plus to be tested.

Constantine Barrett, 68, whose repair shop is on Waylett Place where the attack took place, said: ‘I was just in my garage working on this car. I saw three youths run that way and then realised there was a fight down there. 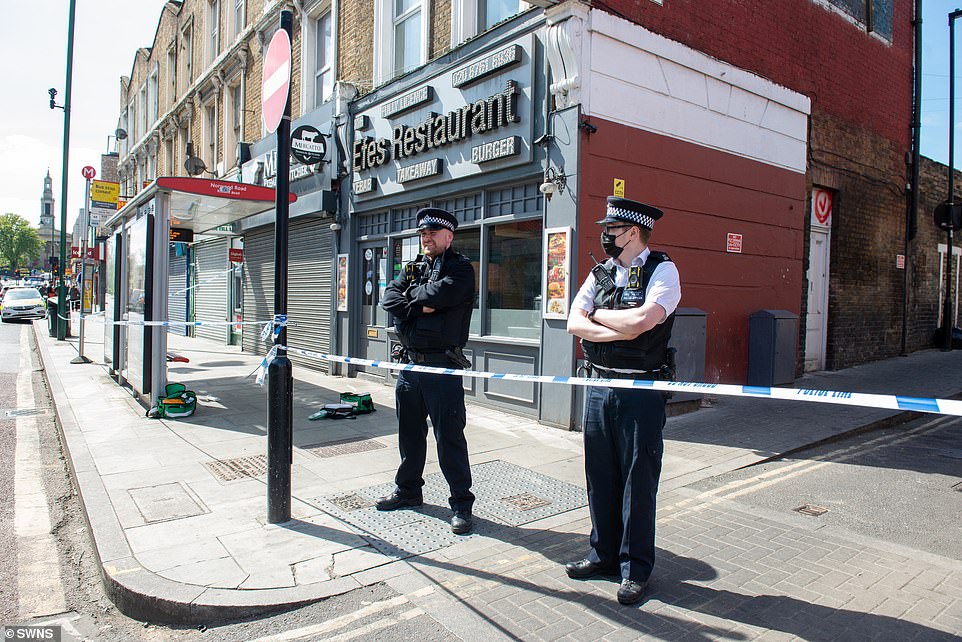 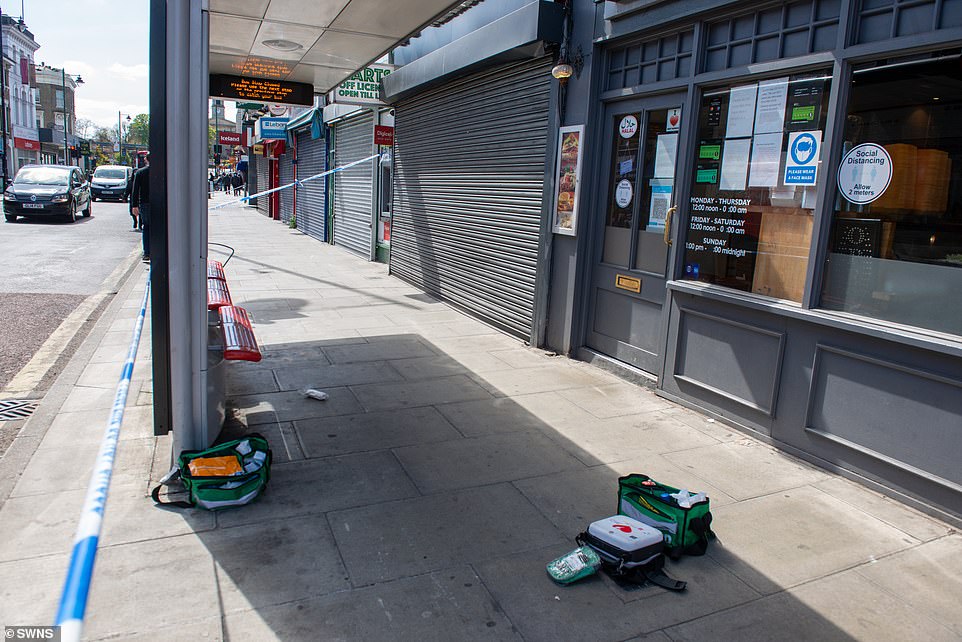 ‘I heard a guy shout ‘they’ve stabbed a girl and she fainted. But I hadn’t realised that it was so serious – because they’re always fighting down there. It makes me sick. Young youths, who are the same colour as me, doing that to one another, it’s madness.’

Tatiana Pereira, 23, who lives across the road from the bus stop, said: ‘I went to the window and saw some commotion on Waylett Place. I saw two girls walking down the road, one of them was limping.

‘Then I saw a guy running back up the road the other way. At first, I thought nothing of it. But something told me to check again, and that’s when I saw one of the girls had been stabbed in the back.

‘There was a woman helping her, who took off her jacket off and used it to apply pressure on her back. She was lying on the floor and then a random guy came to help her, while she called the police. Then eight police cars, two ambulances and a helicopter showed up.’

Jeff Caktu, 64, who works in refurbishment, said: ‘We heard the police sirens and came out to have a look. One of the girls was on the floor, but she was breathing.

‘It was too stressful though, so I had to come back. I think she must have been very badly injured because straight away the helicopter came and landed on the B&Q car park. 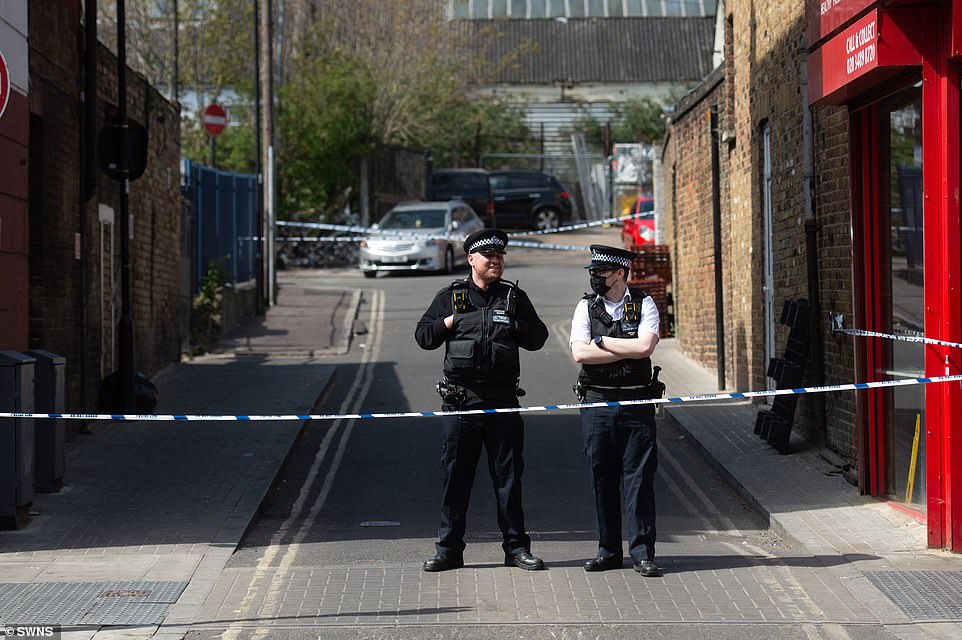 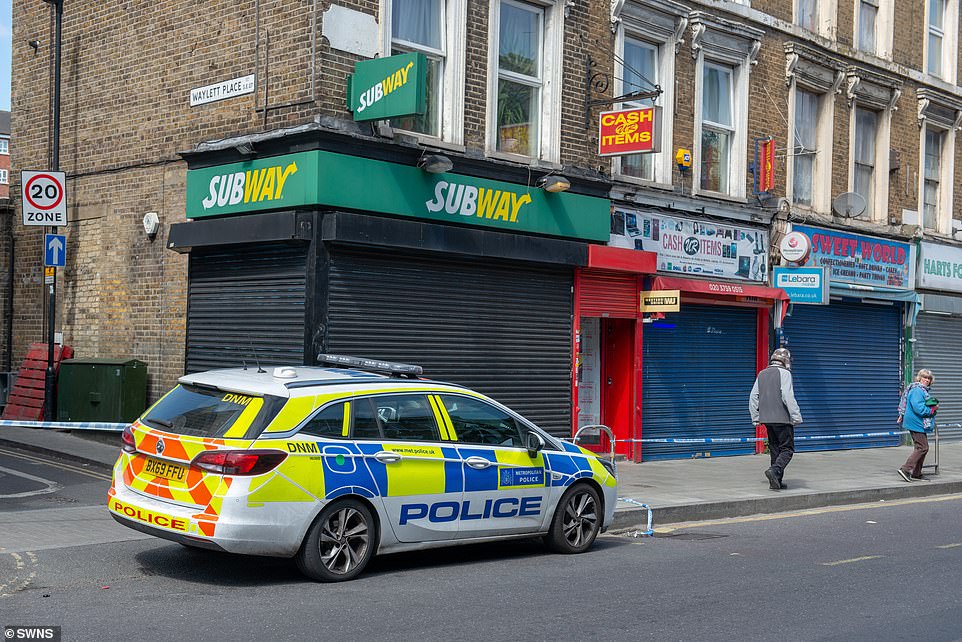 ‘It was nasty – something similar happened to me 30 years ago, and I’m still taking tablets for it. I have an eight-year-old boy and what’s his future going to be? Imagine he was the one lying there.’

Nawaz Mohammad, 64, who owns a shop near the scene, said: ‘I was inside the shop and then I heard some shouting. There were two girls there at the bus stop who had been stabbed in the back.

‘One was lying on the floor and the ambulance people were treating her wounds. The other was sitting at the bus stop. Then they put them in the ambulance and took them away. I think it happened at the back – where there’s a car wash and a garage.’

The double stabbing was one of several violent incidents on the streets of London over the weekend.

Fares Maatou, 14, became the eleventh and youngest teenager to be stabbed to death in the capital already this year when he was fatally knifed in Canning Town.

Another 14-year-old boy, who cannot be named for legal reasons, has been charged with murder and was due to appear in court today.

A 22-year-old man was left fighting for his life after being stabbed during a street fight in Bermondsey, South East London, on Friday night. 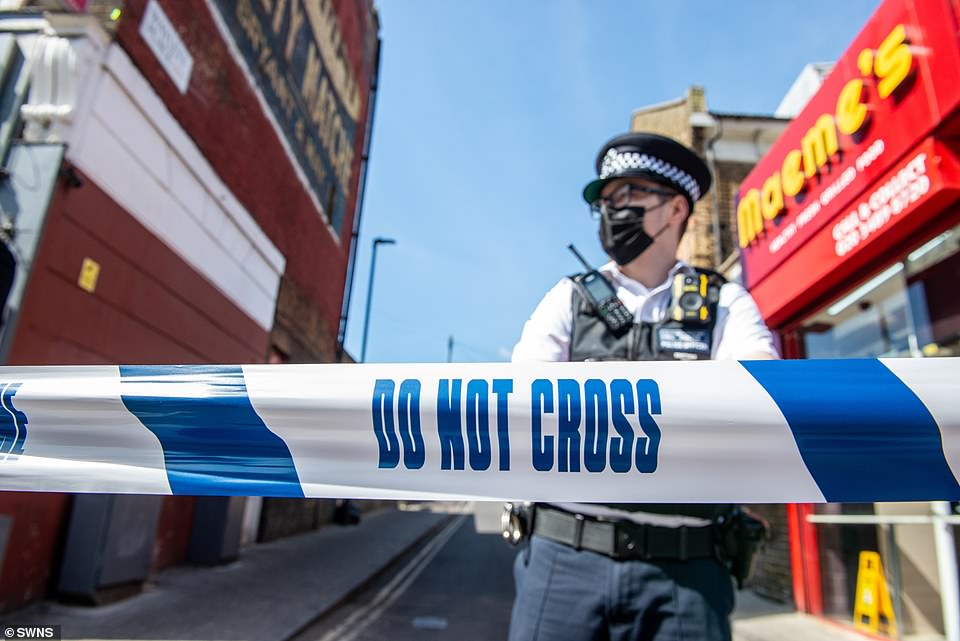 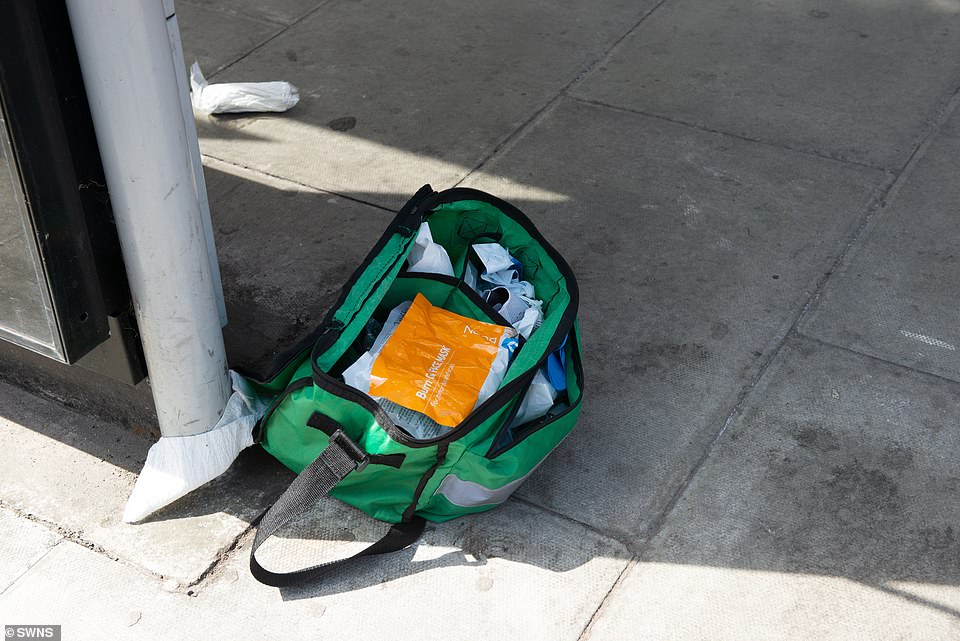 A 19-year-old man was shot and another 19-year-old stabbed in a double attack in Hackney, east London, on Saturday night.

Detectives investigating the West Norwood double stabbing are appealing for anyone with any information to come forward.

Detective Sergeant Rob Merrett, of the Met’s Central South Command Unit, said: ‘This is a shocking incident involving two young female victims, one of whom remains seriously ill in hospital. It has understandably caused considerable alarm in the community.

‘Officers responded immediately when the 999 call was received.  Two boys were quickly apprehended near the scene, and urgent enquiries led to two other males being arrested later on at addresses in Lambeth.

‘All four are now in custody and my team are conducting a thorough investigation to establish what has led to this unacceptable violence.

‘I urge anyone who has information, pictures and video that could assist us to make contact immediately. It is imperative that we work with the community to fully establish what has happened here and bring any offenders to justice.’

JPMorgan sets to allow clients have access to Bitcoin fund

JPMorgan sets to allow clients have access to Bitcoin fund