After four games without a win Scotland’s champions needed this. Under intense scrutiny after an iffy start to the season, a 35th consecutive win in domestic cup competitions teed up a repeat of the 2019 final against Hearts on December 20. For Aberdeen it was the latest in a painful run of Hampden defeats to Scotland’s champions.

In the course of winning eleven straight trophies the Parkhead side overcame their Pittodrie rivals in two League Cup finals, a Scottish Cup final and two semi-finals. On a day of wind and torrential rain around a ghost-like National Stadium win number five propelled Lennon’s side to within 90 minutes of a quadruple treble. 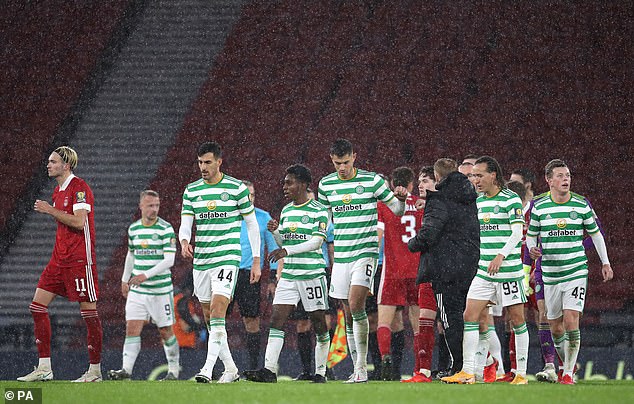 Two first half goals in five minutes from man of the match Ryan Christie and Mohammed Elyounoussi secured a comfortable victory in the end. After a Europa League draw in Lille on Thursday tired legs offered Aberdeen the scope to have a go in the final 20 minutes but, this time, there would be no second half collapse.

The anguish of Derek McInnes after another Hampden cup defeat was only heightened by the loss of striker Marley Watkins to injury eleven minutes from time.

Odsonne Edouard returned to the Celtic starting line-up and should have put Celtic ahead when he was denied by a terrific double save from Joe Lewis after seven minutes. 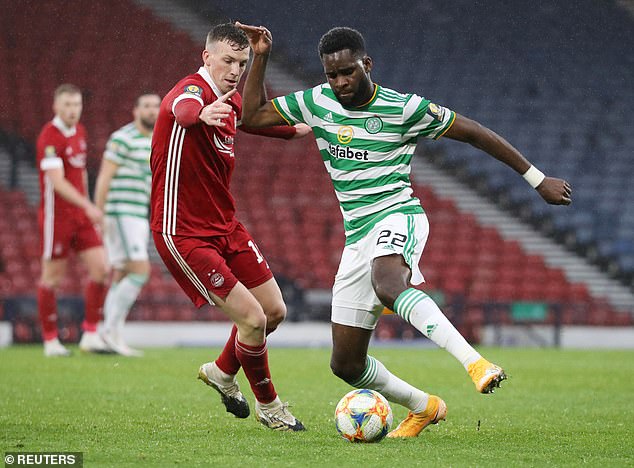 There was absolutely nothing Aberdeen’s captain could do about the Ryan Christie strike which swept the champions into the lead after 18 minutes.

Buoyed by a 3-3 draw with the same opponents last weekend an Aberdeen side beaten in their last five domestic games started the game with menace and intent.

Matty Kennedy – in for the injured Jonny Hayes – targeted Jeremy Frimpong on the left flank. More than once Sam Cosgrove – making his first start of the season since a long-term injury – threatened to expose Celtic’s fragility in the air.

Christie’s opening goal changed the game. A period of probing and pressing from side to side on a sodden pitch ended when the the midfielder came off the wing – losing Kennedy – to collect a Tom Rogic flick. He showed outstanding technique to curl a wonderful 25 yard strike beyond Lewis into the top corner. Christie scored the winner against Aberdeen in the 2018 League Cup Final and this one was in from the minute it left his boot. 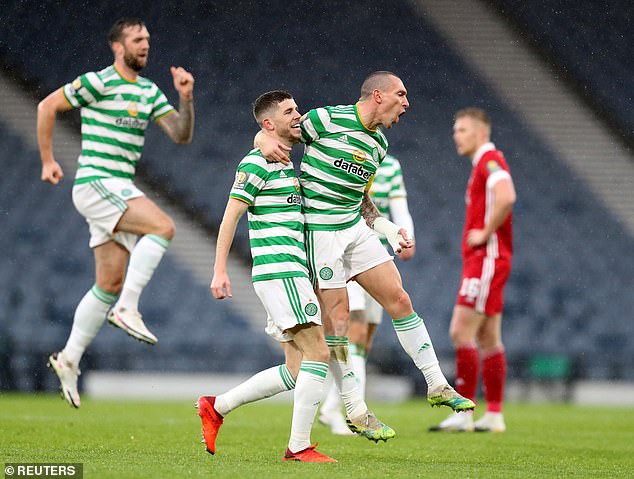 Rogic has a habit of putting Aberdeen to the sword. The Australian playmaker sealed the first of three – potentially four – domestic trebles at Hampden with the winning goal when the sides met in the Scottish Cup final of May 2017. He provided two assists at Pittodrie last weekend.

Here he was the architect of a second goal after 23 minutes. Make no mistake, there was work to do when he received Odsonne Edouard’s angled ball on the byeline. It needed a wonderful piece of skill to hang an inviting cross high enough to deceive Lewis and present Mohammed Elyounoussi with the chance to ghost in behind Andrew Considine and thump the ball high into the net from three yards for his third goal in three days.

Celtic hadn’t lost a game in which they had scored first for two years. Yet they *had* surrendered a two goal lead in Lille as recently as Thursday night. 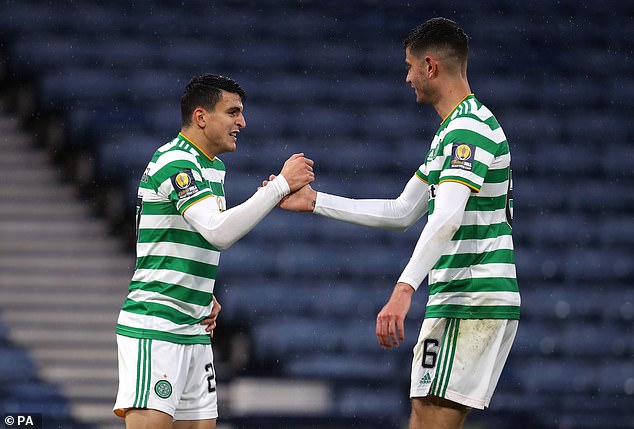 Starting with a three man backline Derek McInnes reverted to a four after half an hour, pushing Ross McCrorie back to right back. Despite some joy in aerial battles in the opening stages they were losing the midfield battle. To find a way back into the game that had to change.

For Aberdeen to make a meaningful impression on the game they had to have the ball. In that respect they were helped by Celtic’s evident exhaustion after the Thursday night game in Lille. 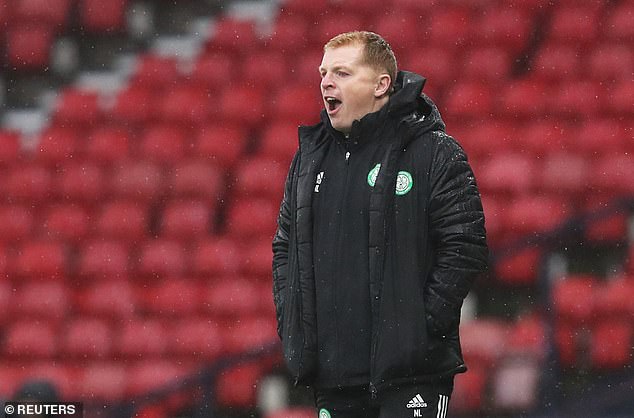 With half an hour to play McInnes had to try something to take advantage. His team were heading for a fifth painful Hampden defeat to Celtic and the introduction of Connor McLennan and Greg Leigh felt like last orders at the bar.

A burst of red pressure was inevitable. A driven Hedges shot was blocked by Bitton, a scream went up for a handball against Shane Duffy in the penalty area with 18 minutes to play and Lewis Ferguson drilled a 20 yard drive a foot over the bar.

So dominant in the first half the champions ended the game a weary looking team. Neil Lennon reacted to his team’s wearying gait with a triple substitution, bringing on Leigh Griffiths, Albian Ajeti and Hatem Elhamed for Edouard and the goalscorers Elyounoussi and Christie, Olivier Ntcham shoring things up in the final minutes.

Aberdeen made another late change of their own of the involuntary kind. Striker Marley Watkins was helped from the pitch like a casualty of war, blood trickling from his nose, after a clash with Scott Brown. Proof were it needed that, in Glasgow on a November afternoon, it never rains but it pours.

Celtic 2-0 Aberdeen: Neil Lennon's side 90 minutes from a quadruple treble