Celtic: What now for Neil Lennon after another Sparta Prague humiliation?


Talk, unlike certain centre-halves, is cheap. When Christopher Jullien sprang to Neil Lennon’s defence in the wake of Thursday night’s debacle in Prague, he showed the kind of certainty that was sadly lacking in the 90 minutes that went before.

Celtic fans would have been entitled to say that had the Frenchman and chums been as impressive with a Sparta Prague player in front of them instead of a microphone then the club might not have experienced another in a lengthening line of mortifying experiences.

When backing his manger, Jullien became the latest Celtic player to speak up, Scott Brown and others having done the same. The champions’ dressing room has become a bit of a talking shop these days. All words and little action.

Lennon at a loss to explain slump

They’re all at it. When Sparta came to Glasgow earlier this month and won 4-1, Lennon said this had to be the end of soft-touch Celtic. “This is a turning point,” he said. “It won’t happen again, that’s for sure.” Twenty days, and three games, later, it happened again. Once more, Lennon is left to sift through a wreckage in an attempt to find something of value. It’s not a pretty sight.

So much of what he said on Thursday night was desperate. He didn’t think they deserved to lose 4-1. Actually, defending the way they did, 4-1 was fair enough. When Lennon talked up his team’s performance for 35 minutes of the second half it was the ultimate in straw-clutching. Well, perhaps not the ultimate. There was reference, too, of the impact that playing in empty stadiums was having on his players. They were “missing the atmosphere,” he said. Making allowances for failure is not a good look.

Lennon said his team have been in a situation like this before and that they turned it around. He was talking about the 2-1 loss to Rangers at Celtic Park last season, a reverse that did, indeed, see many people question the mettle of his team. Those questions were met with an emphatic answer on the run-in.

The situation now is very different, however. Last season, Celtic had the kind of credit in the bank that they don’t have now. Before that December loss to Rangers they had won 16 of their previous 17 games. They’d beaten Lazio home and away, they’d defeated Rennes, they’d won the League Cup final against Rangers with 10 men, they’d scored 45 goals and conceded only nine.

Currently they’re on a run of 21 goals conceded in nine games. Many of those goals were calamities perpetrated by an array of different people. One of the things Lennon said on Thursday night that was unarguable was that Celtic are “lacking in confidence”. When he followed up by saying he was scratching his head trying to figure out why that’s the case it was a moment of honesty that revealed weakness. Lennon did not come across as a manager in command.

It’s not just the most vocal who want him out now. For weeks if not months, there’s been a venom about some of the criticism directed at him by small elements of the Celtic support. It’s been nasty and wholly unwarranted. He’s deserved better than the bitter invective from these cyber warriors.

The majority of fans have been far more circumspect, their analysis measured. Lennon is losing more and more of these people. They’ll admire him forever for what he’s done over two decades as player and manager but they’ve lost faith in his ability to take this team further. The case for the prosecution is weighty and getting weightier by the week.

How much does this matter? That’s the question. Ultimately Dermot Desmond, the majority shareholder, will make the decision to stick or twist on the managerial front. Peter Lawwell, the chief executive, will be heavily involved, but Desmond is the one who pulls the strings.

Trying to second-guess what Desmond is thinking is a bit of a challenge. He’s not a man who makes a habit of revealing things to journalists. Famously, in a response to a critical column in the Irish Times, he sent the writer in question an extract from the poem, Still I Rise, by Maya Angelou…

Does my sexiness upset you?

Does it come as a surprise

At the meeting of my thighs?

With all due respect to what Desmond has between his thighs, it’s what he’s got between his ears that Celtic fans will be wondering about. He rarely does interviews, but he did speak to The Athletic in September, when Celtic were in the midst of an eight-game winning run. His words predate the current crisis, but they’re the only thing we’ve got in terms of trying to figure out what the main man might be thinking.

Talking about the loss to Rangers last December and the club’s refusal to panic, he said: “That’s what’s so good at Celtic. We’re unified, we don’t have recriminations, we’re not here to fire somebody or blame someone, we take collective responsibility.”

If that’s still how he feels then Lennon is going to be given more time to put things right. Desmond then spoke about the character of his manager. “You underestimate Lenny at your peril,” he said. “He’s a very intelligent individual. He’s got great awareness and integrity.”

You can absolutely see where Desmond is coming from. Lennon has overcome an awful lot in his life. He’s been subjected to sectarian abuse, physical attacks in the street and deeply sinister plots in the post. He took over as manager after the dejection of the Tony Mowbray era and made a huge success of the job. He took over again when Brendan Rodgers walked out and won every trophy he was asked to win while knowing that a high percentage of fans didn’t really want him there.

Desmond and Lawwell are loyal to Lennon, but how far does that loyalty stretch? At snapping point or still plenty of elastic left? Very few people know the truth of that. They were grateful to him for answering the call when Rodgers left. They were appreciative of him steadying the ship and steering home title number eight. They were thrilled for him when he delivered title number nine. They will want to give him every chance of making it 10.

Banners and social media outrage will not influence Desmond all that much. In his business life he doesn’t have a reputation for bowing to public pressure. If anything, he rails against it. The more the fans say that Lennon must go, the more he may think that Lennon must stay.

There has to be a limit on loyalty, though. Domestically, Celtic play Ross County (in the League Cup on Sunday) then St Johnstone, Kilmarnock, Hearts (the Scottish Cup final), Ross County again, Hamilton and Dundee United before the next Old Firm game. We might not know Desmond’s and Lawwell’s mindset, but you don’t have to be Nostradamus to figure out that a slip in any of those games could be fatal.

Lennon is wrong when he says he’s been here before. He hasn’t. He’s in unchartered territory now. 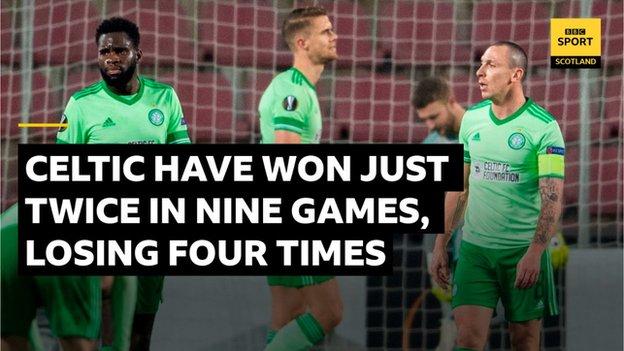