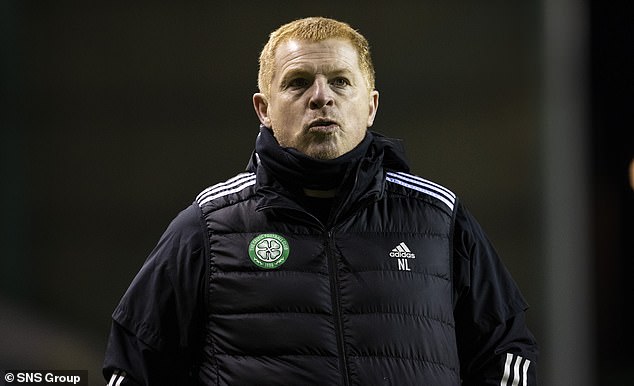 Celtic are poised to stand by under-fire manager Neil Lennon despite the clamour for change from supporters.

The Parkhead boss is under intense scrutiny after Rangers opened an eleven point gap at the summit of the Scottish Premiership.

Lennon’s side have won just two of their last eight games. And while a late rally against Hibs at Easter Road on Saturday salvaged a point in a 2-2 draw, the outcome did nothing to silence dissent amongst disaffected fans.

Sportsmail understands, however, that Lennon retains the backing of Celtic’s hierachy ahead of Thursday’s Europa League clash with Sparta Prague.

And, while the situation remains fragile, sources close to the Northern Irishman insist he has no intention of throwing in the towel despite the most testing period of his second spell in charge.

While home league games against Ross County, St Johnstone and Kilmarnock offer some prospect of respite the champions face a testing trip to Prague to face a Sparta side who won 4-1 in Glasgow earlier this month.

French defender Christopher Jullien could be back in the fold after a lengthy lay-off – but could start the game on the bench.

Zlatan Ibrahimovic, meanwhile is set to miss next month’s Europa League visit from the Parkhead side after sustaining a hamstring injury during a 3-1 win over Napoli on Sunday.

He is set to undergo a scan but the veteran striker is expected to be out until Christmas.

Locations with the most 12-point drivers REVEALED