Champions League .. Casemiro, despite Real’s fall to Sheriff: We did a good job 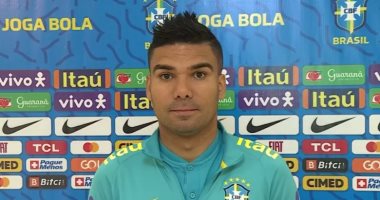 Real Madrid’s Brazilian midfielder Carlos Henrique Casemiro confirmed that despite the surprise defeat by Sheriff Tiraspol (1-2) at the Santiago Bernabeu, they did a “good job” but the failure to win was due to “football issues” against an opponent. He hit twice and scored two goals.

After the match, he told Movistar+, “This is football. A team that shoots more than 20 times on goal and plays well and another that comes with a very clear goal, which is defense… They shot twice and scored two goals; it’s football matters. More attention. There are many ways to lose a game, and in today’s match we did a good job. Their goalkeeper saved a lot of balls, and we have to congratulate them because they shot twice and scored two goals.”

“We started well and controlled the game well, we had complete control of the game. We had chances to advance, but they scored a great goal in the end. Many times in football you have to win, but this year we have already played some bad matches.” We won it, but in this game we controlled a lot, but if you are not effective in the front line, it hurts you in the back line.”

“At this club, the requirement is always to win. We know we’re on a good path and doing well. We’re first in the league and we have chances to reach the Champions League last 16… The important thing is not the way you start.” things, but how they end.”

With this result, the balance of the royal team freezes at 3 points, in which it occupies second place, while Sheriff is unique in the group lead, in a resounding surprise, with a full score (6 points).

NBA: The Lakers are scared with a photo for the story and LeBron reassures his fans: “I was skeptical but I have been vaccinated”

Why Cardano Price Is Falling Apart? This Is When ADA Price Can Jump 2021

Why Cardano Price Is Falling Apart? This Is When ADA Price Can Jump 2021