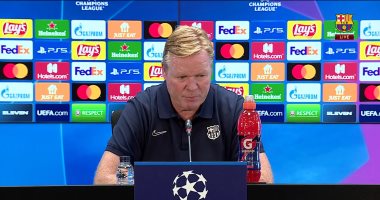 Barcelona coach Ronald Koeman said that his team is preparing to face Benfica tomorrow, Wednesday, in the second round of the group stage of the Champions League season 2021-2022..

Ronald Koeman said during the match press conference: “We respect the opponent, and they have the privilege of playing in front of their fans and on their land, without a doubt they will want to win the match, and we will also strive for the same whether we play on our land or outside.”

Koeman added: “We have analyzed Benfica’s performance and know their strengths. We will try to stop them and control the ball, although we know how strong they are in the rebounds because of the speed of their players.”.

Koeman continued: “The return of Fati was an emotional moment for him, scoring a goal, his family’s celebration. He returned without problems, and we want to give him more time and see how much he recovers physically before any match.”.“

The Barca coach continued his statements: “Barcelona always plays to win, we want to control the game, create spaces and score goals with the players we have..“

Koeman continued: “I expect a complicated match against Benfica. I do not think it is a team that will leave us a lot of space because the Portuguese mentality depends on controlling the rhythm of the match.”

In response to a question, how are things going with Luke de Jong? Koeman said: “Hiring Luke de Jong was in the last moments of the Mercato to strengthen the attack due to injuries. He needs some time to adapt, but he was good against Levante and scored a goal.”

And Koeman added: “Playing several matches in a short period is difficult for the players, but we have to fight for a good result.”.

Koeman added: “I did not meet the president this week, but I am sure that I will meet him today. I did not meet Laporta, but we will meet on the plane today, and I cannot give my opinion on Fati’s return to the national team, but we have to mention that Fati was absent from the stadiums for 10 months, and I do not know.” Will Fati return to the Spanish national team? I am not the coach of the Spanish national team, but Fati needs some time to fully recover.”.

Koeman continued: The Levante match, we played well, and this is what we want..“

Koeman concluded: Benfica is a strong team with big names. It will be a beautiful match, and we have to get a good result from this match.

Barcelona began its Champions League campaign this season by losing to Bayern Munich 0-3, in the first round of the group stage.