CHRISTOPHER STEVENS: A mystery illness, a lack of PPE… that could NEVER happen here

CHRISTOPHER STEVENS reviews the weekend’s TV: A mystery illness, a lack of PPE… that could NEVER happen here

Trigger warning: some readers may be traumatised by the issues discussed in this column. If you have been affected, please lie down in a darkened room and sob hysterically until you feel better.

Every episode of Casualty and its medical soap sister, Holby City, features disaster scenes but few can be more distressing than the ghastly nightmare of Dr Dylan and the steamed up mask.

The cantankerous-yet-brilliant surgeon, played by William Beck, was struggling to do his job with the hospital in lockdown, on Casualty: The Lost Episode (BBC1), when his visor started to fog up.

Then he realised his colleague couldn’t understand what he was saying. 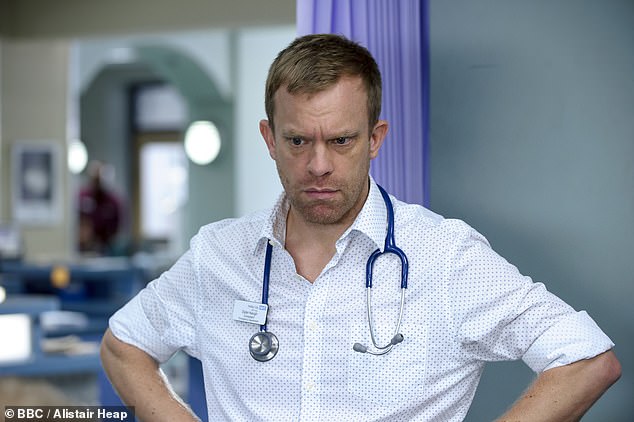 Instinctively, Dr Dylan tore off his protective gear — and touched his own face. The horror! Small wonder the Beeb felt such imagery was too fearful to be screened to a nation in the grip of a pandemic.

This chapter of the long-running soap (Series 33, Part 34) was hauled from the schedules back in May. BBC execs felt viewers might regard it as poor taste to see fictional medics trying to cope with an unknown contagion without the proper protective equipment.

Well, that could never happen in real life, could it?

Auntie shouldn’t have been so afraid of upsetting us. It was quite a relief to see the cast getting decontaminated by stripping off their yellow plastic suits and dabbing themselves with damp tissues. I’d prefer that to self-isolation any day.

Styling this as a lost gem was a bit much, though. It’s not as if some avid collector discovered the master tape in a redundant Betamax machine during the demolition of a TV studio in Albania. It would have been more honest to bill it as Casualty: The Postponed Episode.

The story, filmed last year, didn’t feature a viral outbreak but a safety alert (or Emergency Code Orange, as people told each other in choked whispers) over a suspected novichok nerve agent that turned out to be rogue agricultural fertiliser.

Dog moniker of the weekend:

When an abandoned mutt was tied up outside his friend the Major’s gate in The Singapore Grip (ITV), eccentric Frenchman Francois gave it a name . . . ‘The Human Condition’. Imagine shouting out that in the park.

There were some prescient moments, though, especially when Dr Ethan (George Rainsford) frowned at the hazmat equipment and told consultant Will: ‘Hopefully we won’t be wearing one of those suits any time soon.’

Don’t be too sure, Dr Ethan.

Will (Jack Nolan) proceeded to punch Dr Ethan in the mouth, but that didn’t really have anything to do with PPE shortages — just a build-up of resentment regarding his ex-girlfriend, paramedic Fenisha (Olivia D’Lima), who is pregnant with Dr Ethan’s baby following a one-night stand.

They proceeded to brawl in the car park. Affairs of the heart take precedence in Casualty, even over hospital lockdowns and terrorism panics. All this filled in some gaps for fans, but one of the pleasures of the show is that you can skip the odd hour and still easily pick up the threads.

But don’t be tempted, if you missed the first part of Us (BBC1) last week, to settle for starting with episode two. This family drama, starring Tom Hollander and Saskia Reeves as a holidaying couple on the brink of divorce, is too good to forgo a single minute. The themes of love and loneliness are huge, and the backdrop — a grand tour of Europe — is panoramic. But the joy is in the details of the dialogue.

Fuming at the sight of his son absorbed in social media, instead of looking respectfully at a 1940s battlefield through a train window, dad Douglas ordered young Albie to imagine what wartime conscription was like: ‘No phones to play with then!’

‘World War II,’ hissed his wife Connie, ‘is not passed down on the father’s side.’ There’s a sting in every line the couple speak.

Romania votes in local elections as prelude to General Election

How to find shares with dividends that can grow: Troy Income & Growth manager

How to find shares with dividends that can grow: Troy Income & Growth manager