Coronavirus UK: How many people catching Covid each day in YOUR area? 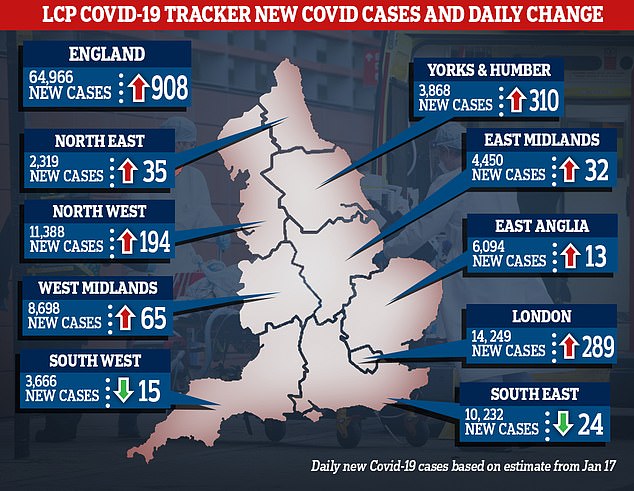 Around 65,000 people in England are catching Covid-19 each day but the outbreak is no longer shrinking, according to analysts tracking the second wave.

London-based Lane Clark and Peacock (LCP) — a consultancy firm that uses official data to estimate daily infections across the country — predicted that cases plunged to 62,552 on January 14.

But the team, who usually crunch numbers for the football industry to help talent spotters or the energy sector to work out the profitability of a power plant, believe cases have increased since January 14, rising to 64,966 on January 17, the most recent day figures are available for.

The analysts have created an interactive map based on their estimates, allowing users to see a detailed breakdown of exactly how the outbreak has changed in every authority across England.

Official Department of Health data — which tracks confirmed cases — suggests Britain’s outbreak has shrunk every day for almost a fortnight.

To use the Lane Clark and Peacock map visit the dedicated Covid Tracker website.

London-based Lane Clark and Peacock (LCP) — a consultancy firm that uses official data to estimate daily infections across the country — predicted that cases plunged to 62,552 on January 14

Experts say the tough Tier Four restrictions were helping to curb transmission across swathes of the country but that England’s third national lockdown helped drive down cases even further.

The LPC model is the only one to show daily cases have plateaued in the past week.

The team’s estimates do not feed into No10’s advisory panel SAGE, unlike projections from other scientists tracking the growth of the second wave.

Its projections are based on Public Health England data which reflects the number of confirmed cases from symptomatic people who get tested.

But the PHE figure is never truly reflective of the daily situation because one in three infected people will never develop a cough, fever or a change or loss in their sense of smell or taste.

In an attempt to understand the true scale of the crisis, LCP also used data from the Office for National Statistics (ONS).

The ONS carries out a weekly surveillance study to work out the prevalence of the virus in the community.

The ONS, however, hasn’t estimated the number of daily cases occurring in England since November because of an issue with data from one of their laboratories.

LCP combine both the PHE daily data with the ONS data, which can give a sense of how many people are infected but not getting tested, to give a ‘more rounded estimate of current new infection rates’.

Dr Jonathan Pearson-Stuttard, the head of Lane Clark and Peacock’s Health Analytics team and also an epidemiologist and expert in public health, told MailOnline the model is intended to be as up-to-date as the PHE data while as comprehensive as the ONS approach.

Britain could face even more super-infectious coronavirus variants because surging infections across the globe fuel the chances of the pathogen mutating to beat the immune system and vaccines, scientists say.

More than 90million Covid-19 cases have been recorded worldwide since the pandemic began, with numbers surging 33.8 per cent in the last two months alone.

And the spiralling cases will only trigger more mutations because it gives the virus more opportunity to evolve, infectious disease experts fear. Mutations could render vaccines useless, experts fear. Number 10’s top scientists believe the current crop of jabs will still work against any of the recently-spotted variants – but may be slightly less effective.

Britain has already been hit by two highly-infectious variants, including one that first emerged in Kent and another that was brought in from South Africa. Fears are also growing about a new Brazilian variant, which has yet to be spotted in the UK.

Dr Ali Mokdad, an epidemiologist at the University of Washington, warned labs across the world were recording more variants of the virus because of the spiralling numbers of infections. He told DailyMail.com: ‘The uptick in mutations (we are seeing) is expected because there is more circulation of the virus and more chances for a mutation to occur.’

He said: ‘We combine these two data sets and we essentially look at the relationship we get between the daily testing data we get and the truer number we get from the ONS surveys.

‘We look at each regional level to see how that upscale factor differs. We find that upward factor and apply that at the regional level and then down to the local authority level using PHE data.’

LCP estimated there were 87,500 cases that occurred on January 5. Daily infections then fell to 67,000 after a week of the draconian measures — a projection in line with other studies.

The analysts claimed the highest infection rates on January 17 were seen in the North West, with parts of Cumbria and Merseyside recording 158.7 cases per 100,000 that day.

At the opposite end of the scale came the South West, with huge parts of the region having some of the lowest daily rates in the country.

Dr Pearson-Stuttard said: The differences between the regions is definitely due  a mix of things.

‘One is the starting level before lockdown was imposed.

‘Regions that had the highest rate also have the highest to come down and are likely to see the most benefit from those stringent measures.’

Dr Pearson-Stuttard also said the difference in infectivity between the strains was also a factor.

‘Clearly we know that in December we had a much higher portion of that Kent strain in London, South East and East of England which helped to drive rates up,’ he added.

The Department of Health yesterday announced another 33,355 yesterday, down on the 45,533 recorded last Tuesday.

The ZOE Covid-19 Symptom Study — which guesses the size of the outbreak through its app — estimates there were 54,000 daily cases in the week ending January 10 in the UK, below the almost 70,000 the week before.

The figures are the latest glimmer of hope that the UK’s second wave may be finally running out of steam.

Speaking to MailOnline about the third national lockdown, Dr Pearson-Stuttard said: ‘We are seeing quite different trends across the country since the latest lockdown has been implemented.

‘It seems those areas that were hit the hardest over the Christmas period earliest, so London, South East and the East of England seem to be on the decline a lot quicker than other areas that still seem to be a very high rates.

‘The lockdown has definitely led to a reduction in cases over the last two weeks but we are still at a huge number of daily cases with a long way to go.’

Dr Pearson-Stuttard argued that the Government could have acted ‘much sooner’ on introducing Tier 4 measures in London which he described as a ‘missed opportunity’ in stopping the spread before it took hold.

Speaking about the weeks ahead, he said: ‘We have seen the worst of the infection rates over that Christmas period in the run-up to this lockdown.

He ended: ‘It is clear lockdown is working and infection numbers are coming down over the last couple of weeks.’