England’s Test & Trace bungling system reached a smaller proportion of at-risk people than at any point since it started, official data revealed today.

The contact-tracing programme, which phones, texts and emails people who have been close to someone who later tested positive for Covid-19, failed to get hold of 40 per cent of those potentially-infected cases in the week from October 22 to 28.

As England’s second wave rumbles on and the country today enters its second nationwide lockdown, the system is crumbling under the sheer numbers of people who are testing positive and being referred to contact tracers.

The system, headed up by call centres operated by private contractor Serco, had to try and get hold of 327,203 contacts in the most recent week when 139,781 people were referred after testing positive. This was more than in any other week.

Its lacklustre performance means that 131,136 people who might have been carrying Covid-19 without knowing it were never told by officials.

The bungling system, which is privately-run but bears the name of the NHS, has hit repeated roadblocks since its inception, including software failures, staffing problems, laboratory backlogs and poor compliance from the public. Most recently, Serco revealed it was having to draft in untrained staff to plug shortages.

One statistics expert from Oxford University, Professor James Naismith, said he wasn’t convinced Test and Trace was having a ‘meaningful impact on the disease’. Labour said it was ‘absolutely vital’ Number 10 uses the next 28 days of lockdown to fix the scheme.

In a glimmer of good news for the well-paid bosses at the helm of the system – some of whom earn £7,000 per day – the time it takes to get people their test results back improved in the most recent week across all parts of the programme. The total number of tests completed, however, was down on the previous week, despite positive cases being higher. 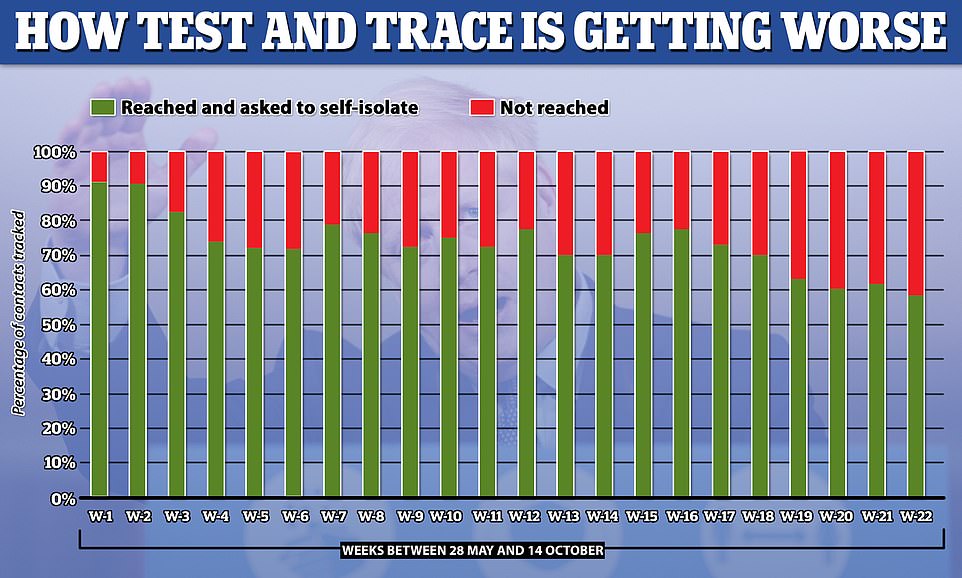 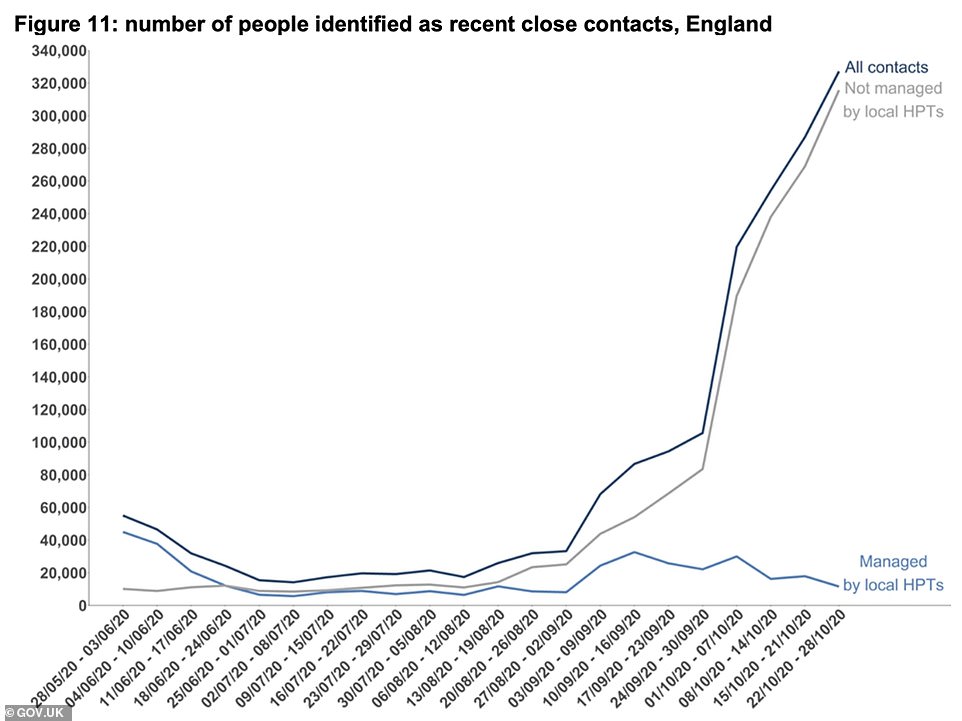 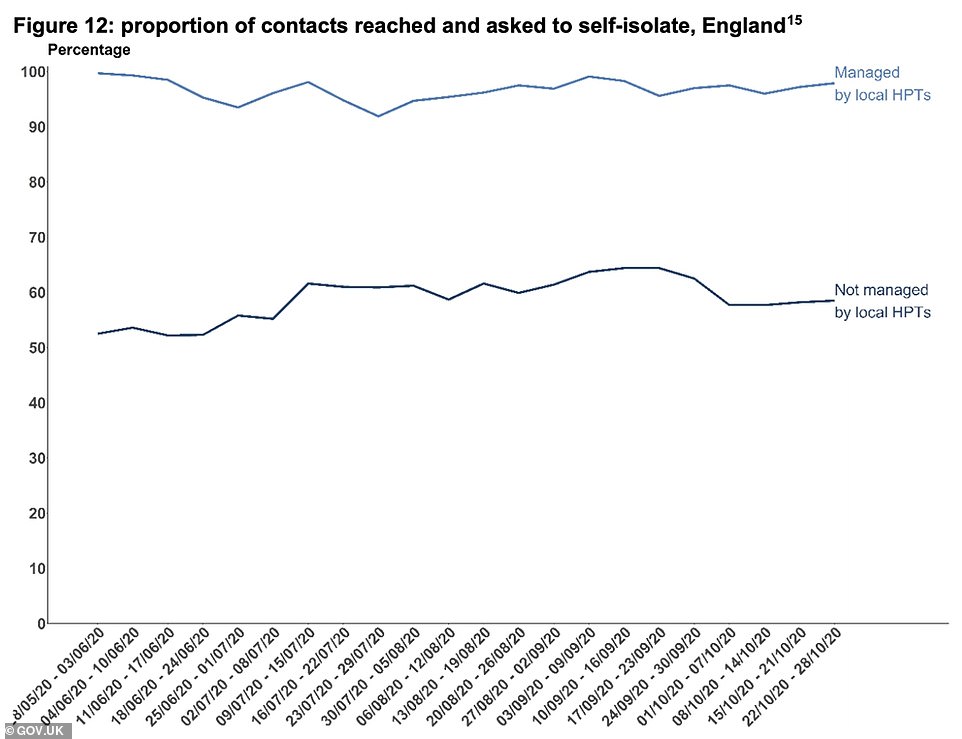 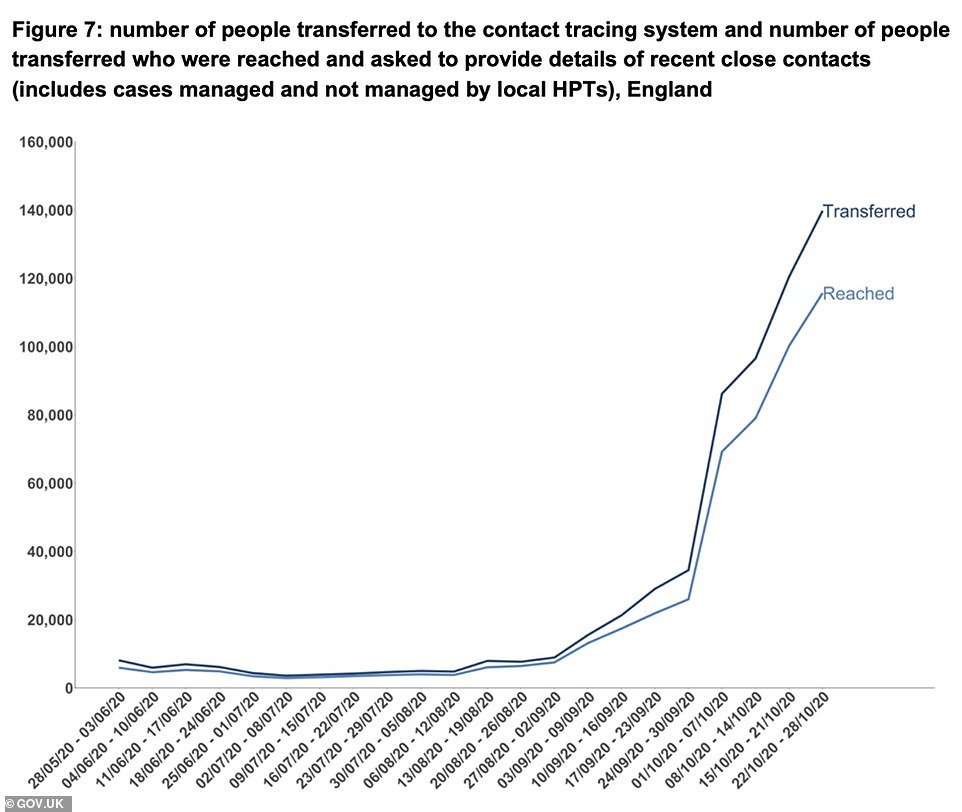 Because tests were down – the reasons for which aren’t clear – the positivity rate has surged to 9.3 per cent, with 10.9 per cent in community testing.

This is cause for concern because it means a growing proportion of people who think they have Covid-19 actually do, and tests are struggling to find everyone.

Professor Naismith said: ‘Until we have the ONS data tomorrow that cover last week, a definitive assessment on the efficiency of the system for last week is not possible.

‘Based on what I see in this release I would not expect to change my previous assessment that system is not meaningfully impacting upon the disease.

‘I note that the positivity rate in pillar two has gone above 10 per cent. Pillar two is testing the wider community.

‘At above five per cent positivity, daily test numbers run an increasing risk of underestimating the growth of the virus. This is well understood by scientists. I have no idea why, given the positivity in pillar two, we are operating pillar two so far below the Government’s measure of capacity.’

The Department of Health claimed success today when it pointed out that more 10million people have now been tested at least once for Covid-19.

‘We know that there are areas where we still need to improve and we are working tirelessly to make the service quicker and more effective every day.

‘We have expanded capacity to over 500,000 tests a day to help meet demand over the winter period and continue to improve test turnaround times. Increased capacity and testing innovations have also allowed us to start regular testing of staff across the NHS and care homes, which will start tomorrow.

TESTING NUMBERS FALL DESPITE MORE CASES THAN EVER

Despite the Test & Trace system recording more positive cases in the last week of October than in any period since it was set up in May, the number of people who were actually tested declined.

But the number of people tested went down.

The reason for this is not clear but there have been times when the Department of Health has had to limit testing because labs have become so overwhelmed with swabs that they cannot process them fast enough.

As a result of tests going down but positives going up, the positivity rate has surged from 8.3 per cent to 9.3 per cent in a week, with 10.9 per cent in community testing. This means that one in every nine people who was tested that week tested positive.

Professor James Naismith, from the University of Oxford, warned: ‘At above five per cent positivity, daily test numbers run an increasing risk of underestimating the growth of the virus. This is well understood by scientists…

‘I have no idea why, given the positivity in pillar two, we are operating pillar two so far below the Government’s measure of capacity.’

‘NHS Test and Trace is a crucial weapon against this virus, but it is not a silver bullet. I urge everyone to follow new restrictions and book a test if you have symptoms to help protect each other during this time.’

For cases managed by local health protection teams, 97.9 per cent of contacts were reached and asked to self-isolate in the week to October 28, Department of Health data showed today.

For cases managed online or by call centres, the figure was 58.5 per cent.

Some 26.4 per cent of people who were tested in England in the week ending October 28 at a regional site, local site or mobile testing unit – a so-called ‘in-person’ test – received their result within 24 hours. This was up from 22.6 per cent in the previous week.

Prime Minister Boris Johnson had pledged that, by the end of June, the results of all in-person tests would be back within 24 hours.

He told the House of Commons on June 3 that he would get ‘all tests turned around within 24 hours by the end of June, except for difficulties with postal tests or insuperable problems like that’.

Scientists and officials have said it will be vital that the Government fixes its Test and Trace system during the month-long second lockdown which starts today.

One of the main benefits of a short lockdown would be to ‘buy time’, experts say, to reset systems like contact-tracing and local lockdown rules so that when they start up again they can cope better because there are fewer people transmitting the virus.

Before the new figures were published, Justice Secretary Robert Buckland said the month-long lockdown that began in England on Thursday will be used to ‘redouble our efforts’ to expand the NHS Test and Trace programme.

Speaking to BBC Breakfast, he said it is also vital to increase the speed at which test results are returned.

‘Lots of people are receiving them the next day which is good, but there are still too many people who are having to wait for days and we are going to continue to work to speed that up,’ he said.

‘We’ve got to use this time not only to deal with Test and Trace but also to prepare for when we get a vaccine.’

He said any future vaccination programme would prioritise those in greatest need ‘so we can avoid a stop and start scenario where we’re having to go in and out of lockdowns’.

NHS Confederation, which represents organisations throughout the medical system, reiterated today that the time bought by lockdown should be used to improve Test and Trace.

Its director, Dr Layla McCay, said: ‘If England’s second lockdown is successful it should ease the pressure on test and trace, giving it breathing space. But the test and trace system must take this opportunity and step up now because the latest figures show just how much work it still has to do.

‘Positive cases are continuing to rise but only 59.9 per cent of their identified contacts were reached and asked to self-isolate last week, well below the 80 per cent that scientists tell us is needed to make the system effective.

‘Turnaround times for test results continue to be longer than they were at the end of June and it is imperative that this improves. The sooner people get their results, the more chance we have to stop the virus spreading.

‘Lockdowns are temporary, and the aim for this one should be not just to save lives and help the NHS to provide as many services as possible, but to bring the number of cases down enough to allow the struggling test and trace system to be more effective. Our members tell us that it is vital that the system improves, rapidly and significantly. Otherwise, a national lockdown simply kicks the can down the road.

‘The lifting of the lockdown without a viable regional alternative and vastly improved test and trace system as we face up to the challenges of winter could be grave.’ 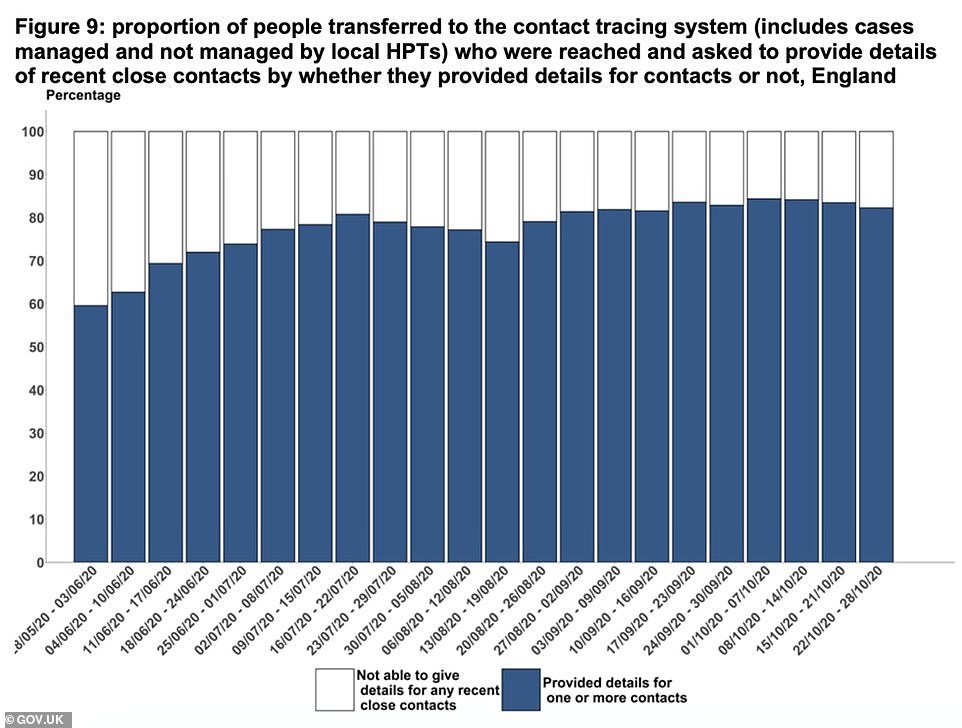 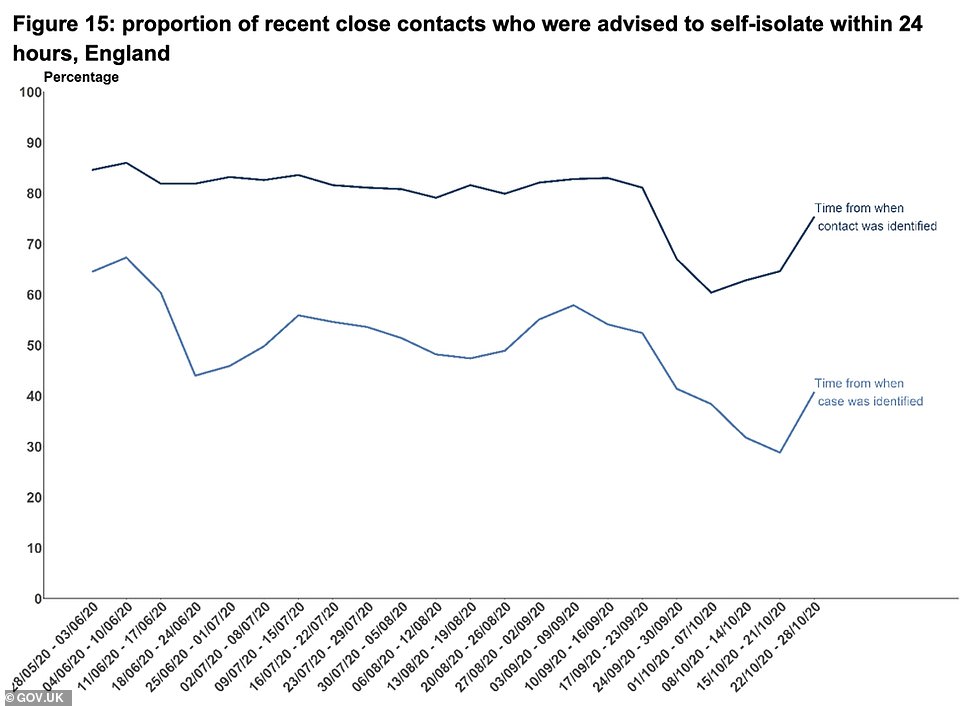 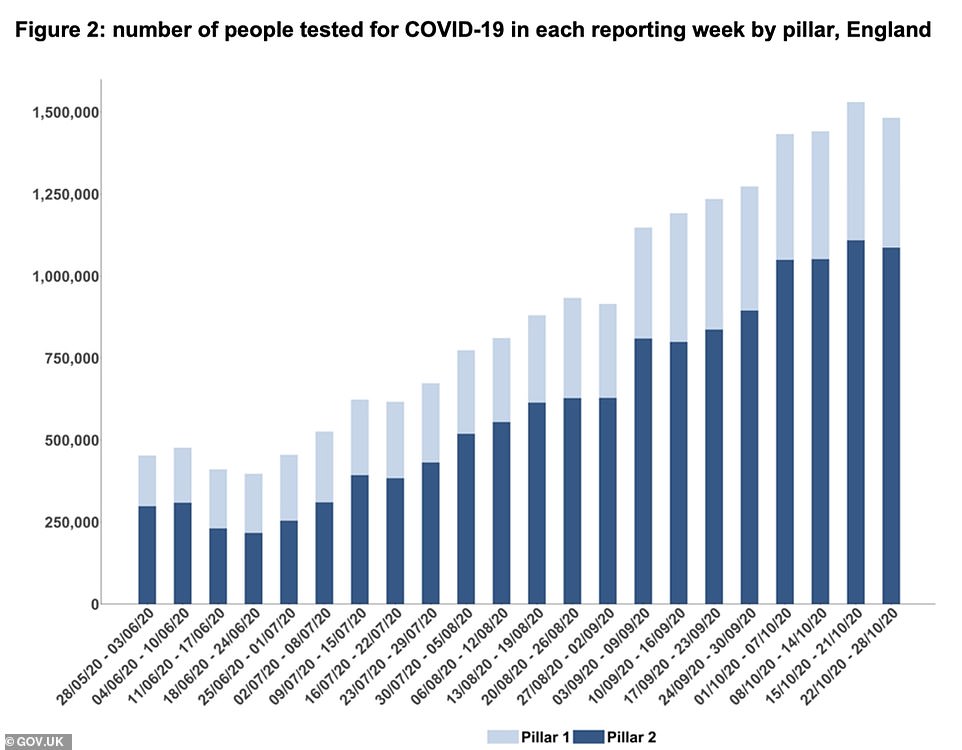