Covid-19 will continue spreading down the North East coast over the next fortnight and outbreaks will continue growing in the Midlands and London, scientists fear.

Imperial College London researchers, who predict hotspots in the future based on current data, believe Hartlepool and Scarborough will both be hotspots by the start of October.

And the academics suspect other North East authorities including Darlington, Stockton-on-Tees, and Redcar and Cleveland, Hambleton and Middlesbrough could all follow suit.

None of the seven authorities have currently been hit by tougher restrictions because of the spike in coronavirus cases but some are listed by officials as being an ‘area of concern’.

Health chiefs last week put more than 2million people in the North East under local lockdown rules, banning people from socialising indoors or in gardens with anyone from outside their own households or support bubbles.

Pubs, bars and restaurants in all the affected areas — Northumberland, North Tyneside, South Tyneside Newcastle-upon-Tyne, Gateshead, Sunderland and County Durham — are now only allowed to offer table service and have to shut between 10pm and 5am, effectively putting a curfew on the region. 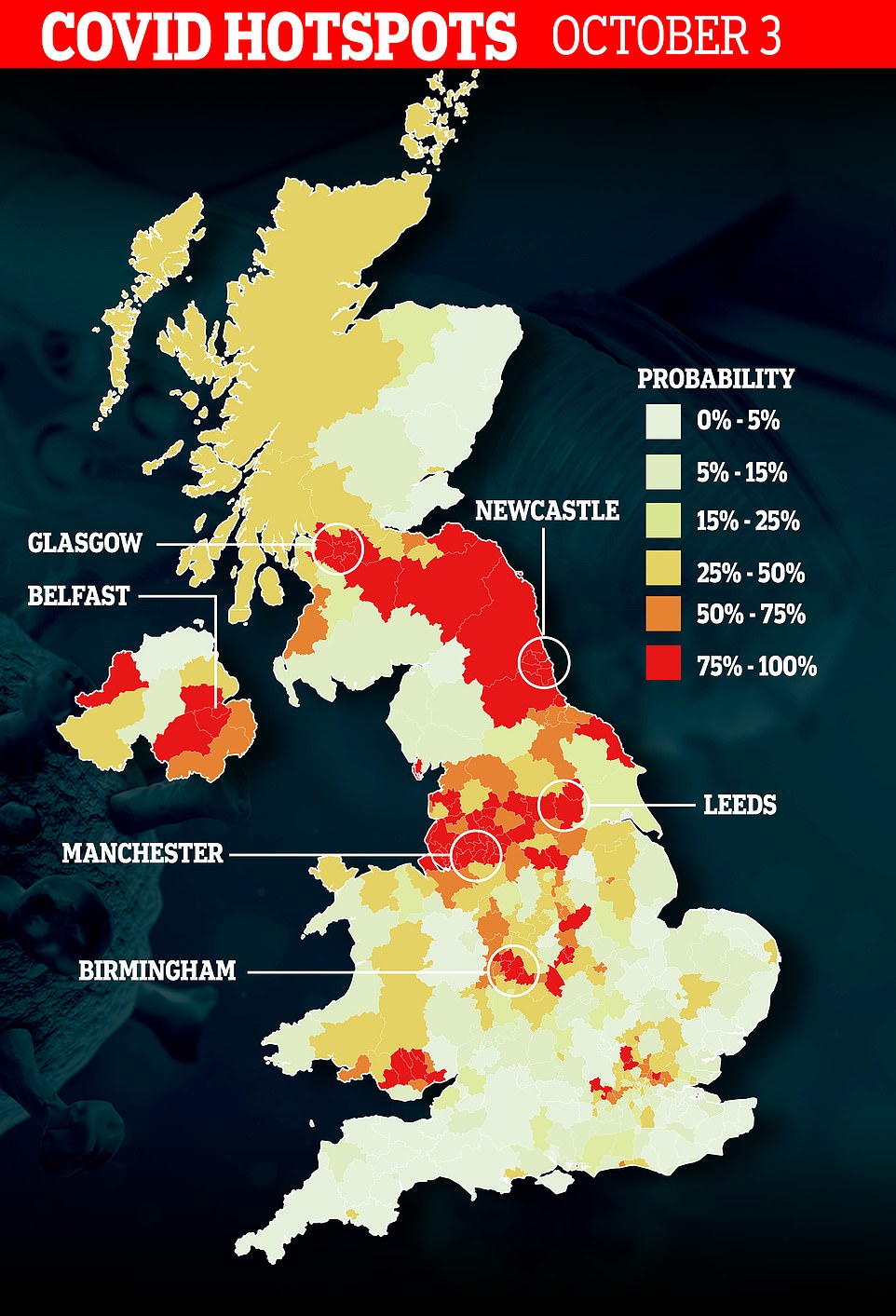 Covid-19 will continue spreading down the North East coast over the next fortnight, scientists fear. Imperial report the probability that a local authority will become a hotspot in a percentage – 100 per cent being almost certain. The map shows each area’s probability by October 3

Imperial researchers led by Professor Axel Gandy recently launched a website which estimates the probability that a location in England will be struck down with high Covid-19 cases, based on current data.

The team behind the website define a hotspot as a local authority where there are more than 50 cases of Covid-19 per 100,000 of the population per week.

Imperial report the probability that a local authority will become a hotspot in a percentage – 100 per cent being almost certain.

WHERE DOES IMPERIAL PREDICT WILL BECOME NEW HOTSPOTS?

The following areas are more than 75 per cent likely to become a hotspot in the week September 27 to October 3:

3. Scarborough, Yorkshire and the Humber

4. Rotherham, Yorkshire and the Humber

9. York, Yorkshire and the Humber

The areas more than 50 per cent likely to become a hotspot in the week September 27 to October 3 are:

New hotspots, as of this week, are:

It predicts the high infection rates seen in parts of Northumberland, North Tyneside, South Tyneside Newcastle-upon-Tyne, Gateshead, Sunderland and County Durham will begin to bleed further south into other parts of the North East and Yorkshire.

Hartlepool, a town in County Durham, is 91 per cent likely to become a hotspot this week and is currently listed as an ‘area of concern’ by Public Health England (PHE).

The likelihood of surrounding areas becoming a hotspot is lower but still high.

Nearby Scarborough, Hambleton and Middlesbrough, all in North Yorkshire, are also tipped to become Covid-19 hotspots – 87 per cent, 71 per cent and 51 per cent likely, respectively. Hambleton is the only one to not be listed by PHE as an ‘area of concern’.

The South of England will remain relatively untouched by Covid-19 moving into the first week of October, the researchers predict.

Other points on the London commuter belt include Windsor and Maidenhead (81 per cent) and Hertsmere (86 per cent), the second of which is an ‘area of concern’.

But it’s Redbridge, an eastern London borough, which is the most likely to become a hotspot (95 per cent chance) in the south of England.

It currently has the highest number of cases per population of all the 32 London boroughs but has not been highlighted as an area of concern by Public Health England.

Another London borough nearing the danger zone is Hounslow, in the north west of the city, and neighbours Spelthorne and Runnymede, districts of Surrey.

Health Secretary Matt Hancock has admitted the introduction of new lockdown restrictions in London within days cannot be ruled out in light of rising cases.

Imperial’s website modelling is based on daily reported cases and weekly reported deaths in each area. It cannot be 100 per cent certain of a place becoming a hotspot because it cannot account for changes in trends.

For example the people of Hartlepool may drastically change their behaviour and limit all social contact from now, in the wake of its neighbours in lockdown.

The predictions assume no change in current interventions in a local authority beyond those already taken about a week before the end of observations. Each local authority is also treated independently of its neighbours, regardless of whether the outbreak is spiralling out of control there or not.

Some local authorities will have younger populations than others, and, given cases are currently being driven by those aged between 17 and 40, may experience a higher infection rate in real life than the model suggests, for example.

The website also predicts places with a high likelihood of becoming a hotspot in the UK by October 3 are Wyre, in Wales, East Lothian, in Scotland, and Derry City and Strabane, Northern Ireland.

Rotherham and York, both in Yorkshire, are also at high risk of having 50 cases per 100,000 by early October. Calderdale and Craven could follow suit, suggesting Yorkshire as a region is facing an increasingly worsening situation with Selby and Sheffield recently becoming hotspots. 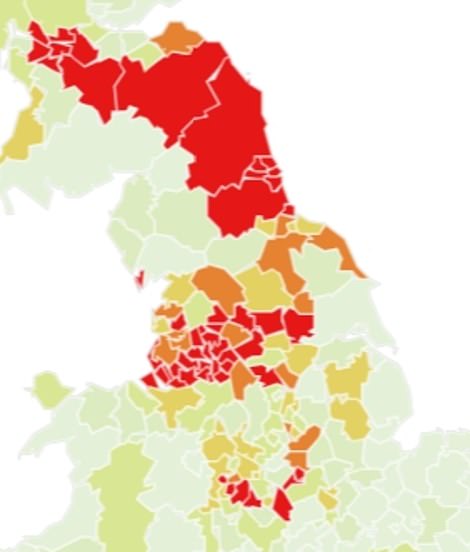 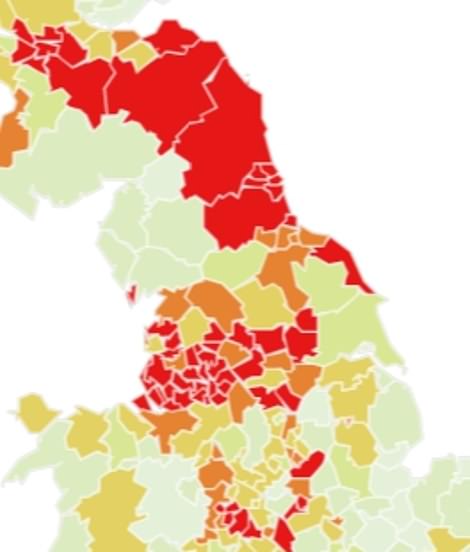 Public Health England’s most recent Watchlist shows the authority in England with the lowest case rate considered an ‘area of intervention’ – the highest degree of concern – is Ribble Valley, with 18.3 cases per 100,000.

But Kensington and Chelsea, Enfield and Southwark, among others, have infection rates higher than that.

Public Health England figures show Redbridge (34.2), Hounslow (32.5) and Barking and Dagenham (29.3) are the three worst-hit parts of the capital.

For comparison, the highest in England is 175.2 in Bolton, Greater Manchester.

If they had been given ‘area of intervention’ status, the Government would support the implementation of a ‘detailed action plan’ to stop cases spreading.

The only reason Ribble Valley has had any intervention is because health bosses in the North West called for a crack down before the outbreak spiralled out of control. The weekly infection rate for the whole of England is 33.8.

South London has escaped the current spike in cases, with the three boroughs with the lowest infection rates at present being Sutton (9.3), Bromley (11.8) and Bexley (12.1).

Walsall, in the West Midlands, and South Ribble, in the North West, are also highly predicted to become hotspots.

After several parts of the North East were placed under ‘local lockdowns’ on Friday, huge parts of England’s North West, West Yorkshire and the Midlands face tough new restrictions from tomorrow.

In Merseyside, Warrington, Halton and Lancashire (excluding Blackpool), residents must not socialise with other people outside of their own households or support bubble in private homes and gardens from midnight tonight.

Restaurants, pubs and bars will be restricted to table service only, while all leisure and entertainment venues including restaurants, pubs and cinemas, must close between 10pm to 5am. And residents are also advised to avoid public transport unless it is essential, as well as professional or amateur sporting events.

The new rules do not apply to Bolton or Greater Manchester, where separate restrictions are already in place.

In the Midlands, people in Oadby and Wigston will be banned from socialising with others outside of their own households or support bubble in private homes and gardens from Tuesday.

And in West Yorkshire, people in all parts of Bradford, Kirklees, Calderdale, will also be banned from socialising with other people outside their household or bubble from Tuesday.

Today the Chief Medical Officer Professor Chris Whitty and Chief Scientific Adviser Sir Patrick Vallance used a press briefing to tell the UK about their growing worry over the spread of the coronavirus.

At the Downing Street Briefing, Sir Patrick warned there could be 50,000 coronavirus cases per day next month, leading to 200-plus daily deaths, if the rate of the disease’s spread was not tackled.

Professor Whitty said there were now ‘significant rates of transmission’ of coronavirus in the UK, with the ‘great majority’ of areas facing an increase.

He hinted at curbs to social lives being needed to prevent coronavirus spiralling out of control, saying ‘we have to break unnecessary links between households because that is the way in which this virus is transmitted’.

Ministers haven’t ruled out another nationwide lockdown, and Professor Whitty and Sir Patrick’s comments did nothing to quell the speculation.

The UK must face up to a ‘six-month problem’, Professor Whitty said, as the colder weather arrives, telling the nation: ‘At this point the seasons are against us, we’re now going into the seasons – late autumn and winter – which benefit respiratory viruses, and it is very likely they will benefit Covid, as they do, for example, flu.’

Investing Show: Dividend share tips away from the usual suspects