A couple who are renovating an 1830’s English manor home have discovered stunning original tiled floors under old carpet in the hallway.

Posting a video on their TikTok account @totheshireborn, Kathryn and Phil, who are giving their Shropshire property a makeover, shared a snap of what the hallway looked like before they set to work, which featured a large entrance and stairs covered in a bright red carpet.

In the clip that followed, the couple can be seen rolling the carpet away to reveal self-levelling compound.

After hours of painstaking hard work chipping away at the hard substance, they found hidden treasure in the form of the property’s original tiles which boasted stunning geometrical patterns. 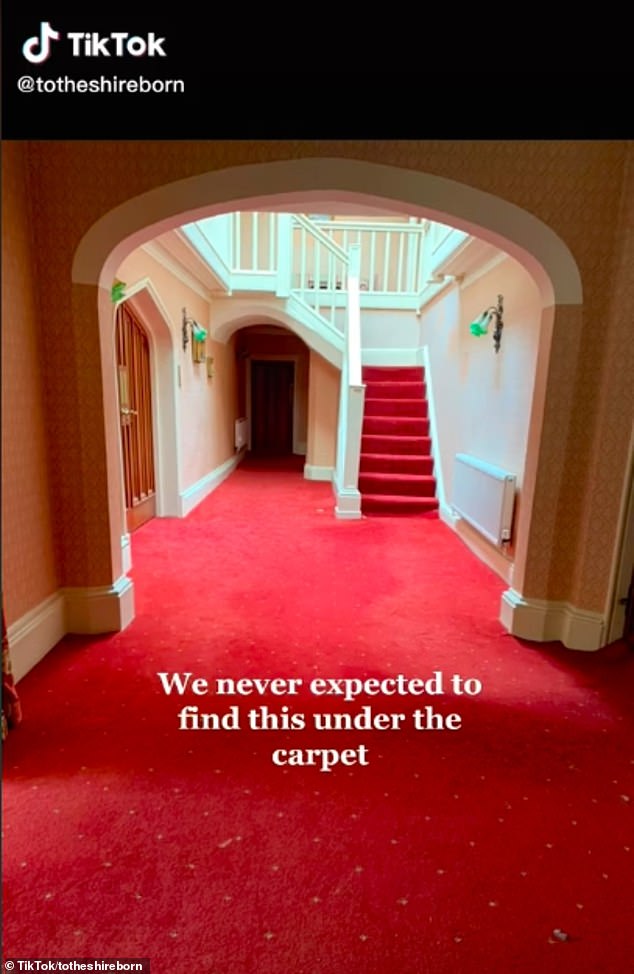 Kathryn and Phil, who are giving their 1830’s English manor home in Shropshire a makeover, have discovered stunning original tiled floors under old carpet in the hallway. Pictured, the hallway before the renovation, which featured a large entrance and stairs covered with a red carpet 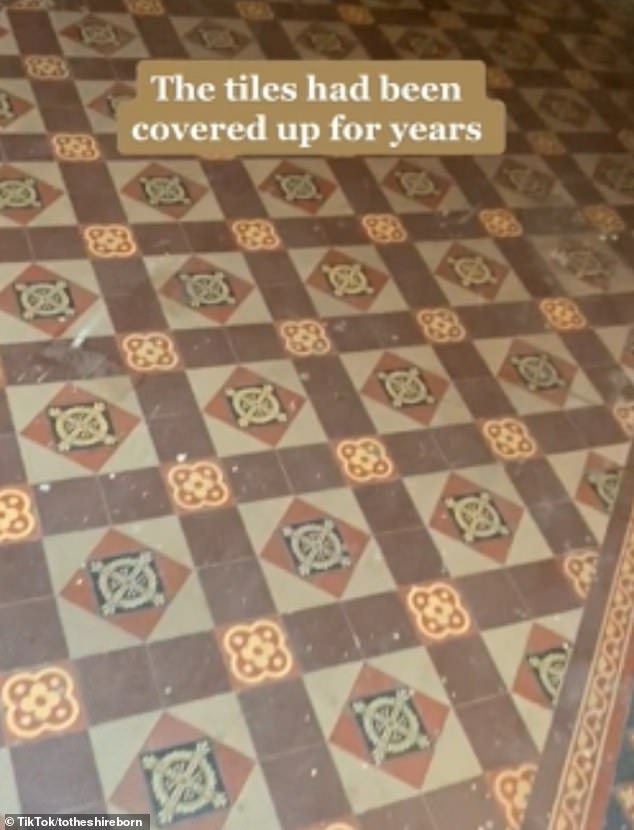 The couple were delighted to discover the property’s original tiles, which boasted stunning geometrical patterns – including ones with golden floral details and others with black and gold crosses (pictured)

In the video, the couple explained how the tiles had been covered up ‘for years’ and added they hope to give them a new lease of life by cleaning them up with a brush and water.

They also went on to say they plan on resetting any loose tiles and replacing ones that had gone missing over the years so the floor would look as good as new.

However, they noted the job was no small task because the flooring was covered in glue, underlay, carpet grippers and a self-levelling compound.

The couple also admitted that when they began the renovation project, they had no idea what they would find, but were delighted to additionally come across the property’s original doorways. 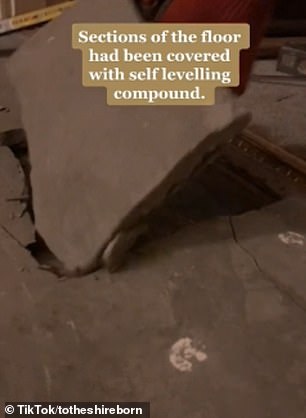 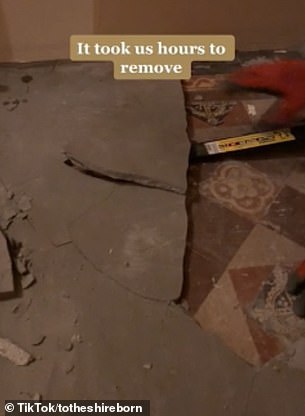 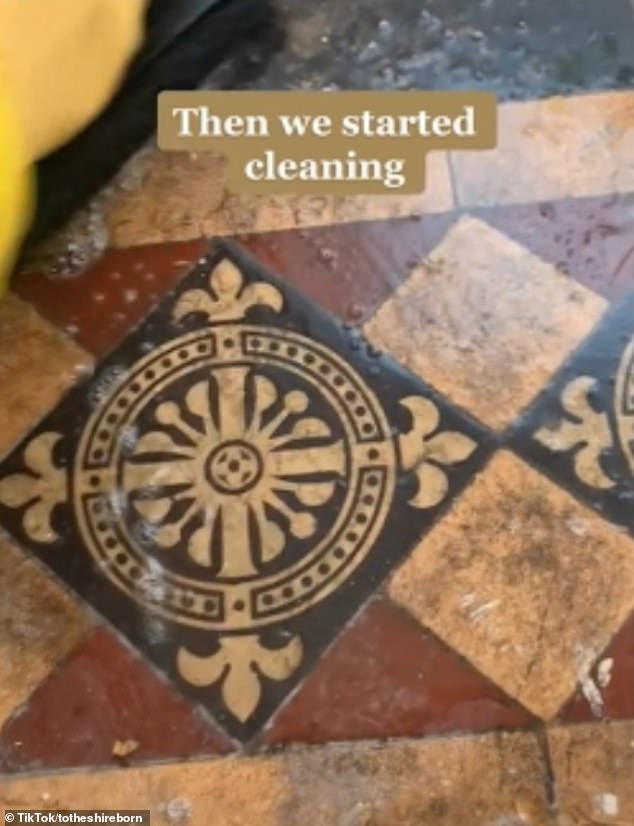 In the video, the couple can be seen rolling away the carpet, which reveals the property’s original tiles which feature stunning geometrical patterns

On Instagram, the couple wrote that they were ‘shocked’ at discovering the old flooring, which they stumbled upon by accident.

They penned: ‘I’m still slightly in shock after today. I’m not quite sure what compelled me to think let’s take a look at floors today while we’re in the middle of trying to finish off a loads of other jobs.

‘We’ve lifted a corner of the carpet when we first moved in and we found a concrete type surface so we just left them and thought the carpet was fine until we start decorating this part of the house.

‘But today, Dad just lifted the corner of carpet in a different place and I still can’t quite believe what I we found.’

The excited homeowners described the floor in the main hall as ‘amazing’ and added they couldn’t believe it was ‘hiding there’ the whole time. 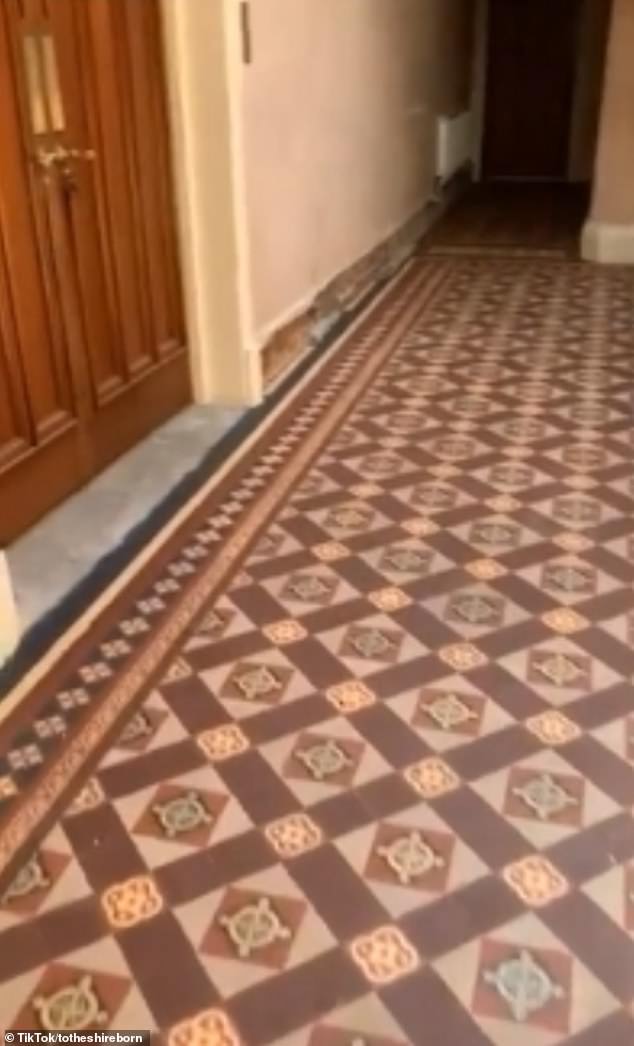 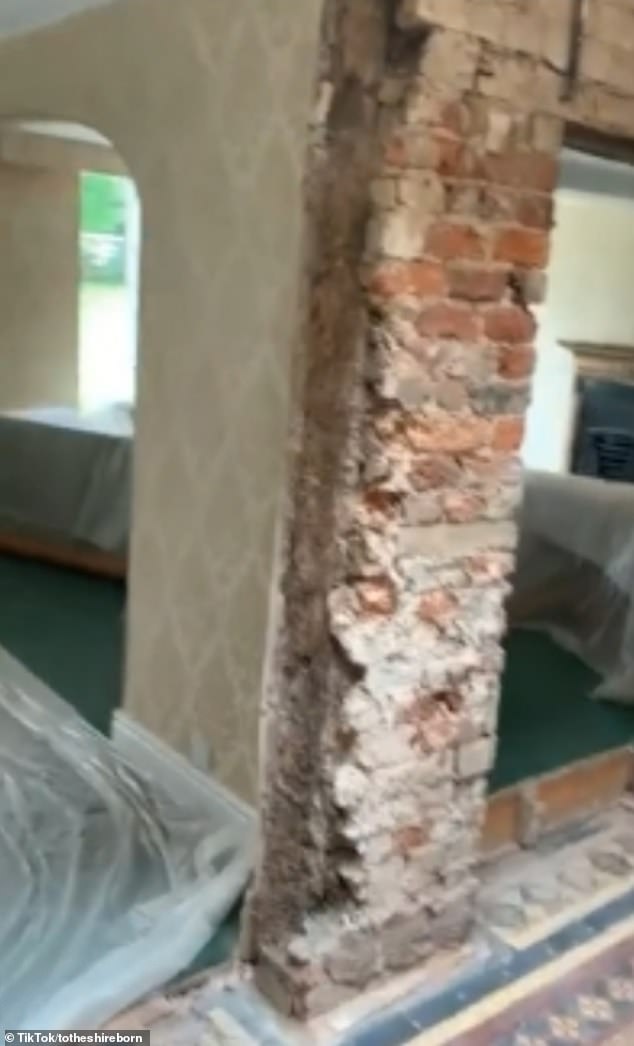 In another clip, the couple showed the process of their hall renovation where they knocked away the plaster walls to reveal the old brickwork and doorways underneath

In another clip, the couple showed the process of their hall renovation and all the little jobs that went into getting the room exactly how they wanted it.

They cleaned all the tiles in the hall after removing the carpets, before also restoring the stairs to their original wooden look.

After using a chisel to get the newer wood off the stairs, the couple and those helping out sanded them down to their original style.

They also knocked away the plaster walls to reveal the old brickwork and doorways underneath, before deciding where the new entrances would go.

The couple, who moved into the home in early 2018 with the aim to restore it to its ‘Victorian grandeur’, say they’re renovating on a large scale by working on 12,000 square foot of the property and the surrounding grounds.

The combined lifestyle of just three typical Americans is enough to kill another human being, according to a new...

30 pigs & piglets looking for a farm to call home