Covid-19 carriers with no symptoms are just as likely to transmit the coronavirus as those who feel ill, according to scientists.

Two studies published today have given further clues about the role played by ‘silent’ spreaders – who make up around one in five of the infected.

One study of South Korean Covid-19 cases revealed asymptomatic patients had the same viral load as those with signs of the disease, such a fever, a new and persistent cough or a new loss or change of taste or smell.

Viral load is a measure of how many viral particles someone has circulating in their body and how likely they are to transmit the virus to others by coughing or talking, for example.

It has previously been speculated that those who do not have tell-tale symptoms are infected with a smaller amount of the virus and, therefore, are less likely to spread it.

But some studies say asymptomatic spread accounts for the majority of transmission of the disease, given that people do not self-isolate if they are unaware they have the virus.

The truth is still yet to be uncovered, however another study today suggested the majority of people do show symptoms of the disease.

Swiss researchers analysed 79 studies and estimated that only one in five Covid-19 carriers show no signs of illness at all — far fewer than previously predicted.

But in contrast to the South Korean study, it found asymptomatic people were less likely to pass the virus onto friends and family. 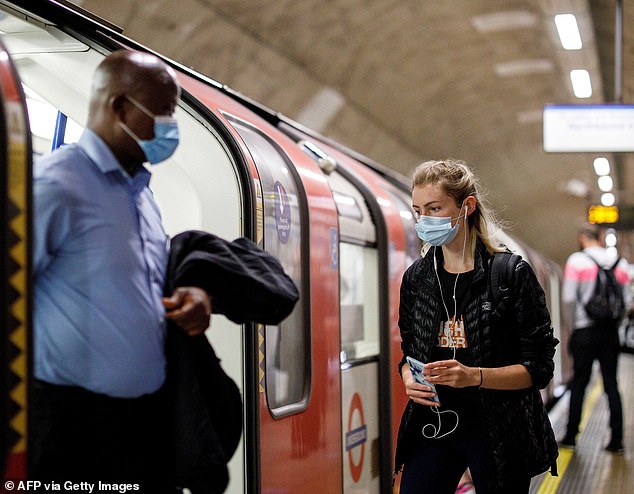 Covid-19 carriers with no symptoms – making up around 20 per cent of those with the infection – are just as likely to transmit the coronavirus, studies show. Researchers said it reinforced the importance of measures like face mask wearing. Pictured: London commuters, June 15, wearing masks

The task of uncovering how many people with Covid-19 have no symptoms is difficult because it relies on screening people at random, which is time-consuming and expensive.

There remains disagreement about what proportion of total infections these cases represent.

However, their existence is feared to threaten the ability to keep on top of the coronavirus because silent carriers carry on their daily business, spreading the virus further without knowing.

The South Korean study claimed people who are infected but have no symptoms may have ‘comparable potential’ – an equal risk – for spreading the virus as those who do have symptoms.

It is at odds with previous theories that have suggested less severe disease means the patient is less infectious.

A team of researchers examined people who were at a community facility designated for the isolation of patients with mild Covid-19 in South Korea.

They evaluated patients’ symptoms as well as the amount of virus they were carrying – their viral load – in their noses and throats.

There were 213 patients without severe symptoms. Of these, 19 per cent were completely asymptomatic – the same estimate given in the Swiss study.

HOW DANGEROUS ARE ‘SILENT CARRIERS’?

Since the Covid-19 outbreak began, concern about asymptomatic spread has been rife.

Those who do not show symptoms would not come forward to get tested, unless for some reason they are screened. Therefore they carry on their lives unaware they have the coronavirus, spreading it to others.

The task of uncovering how many people Covid-19 cases are asymptomatic is almost impossible because it relies on screening of populations on a mass scale.

But some studies give clues.

The most alarming was that from Professor Alvin Ing and colleagues from Macquarie University in Sydney, published in the BMJ Journal Thorax on May 28.

The researchers analysed tests from all 217 passengers and crew on board a ship that departed from Argentina for a 21-day cruise of the Antarctic Peninsula in mid-March.

A total of 128 tested positive. The majority – 81 per cent – were asymptomatic.

The second question is how much do ‘silent carriers’ contribute to the spread of the disease.

One study of South Korean Covid-19 cases, published in the journal Thorax, revealed those without symptoms had the same viral load as those with signs of the disease.

Viral load gives an indication of the ability to transmit the virus to others by shedding the virus when coughing or talking, for example.

Having a high viral load — the number of particles of the virus someone is infected with — may make people more contagious, evidence suggests. It can also give the bug a ‘jump start’.

The other study, a review of literature by researchers at University of Bern, Switzerland, said people who did not have symptoms were less likely to pass the coronavirus on to friends a family – a contradiction of the South Korean study, using different study methods.

The team looked at the secondary attack rate – the proportion of close contacts who catch Covid-19 from an ‘index case’.

It was presymptomatic spread that appeared to be the most problematic – that is, people transmitting the virus to others before their symptoms appear.

‘The analysis of secondary attack rates provides some evidence of lower infectiousness of people with asymptomatic than symptomatic infection,’ the study authors wrote.

Academics in Ireland reviewed 17 global studies to estimate how much transmission occurs in the ‘presymptomatic’ period, publishing their findings on the website MedRxiv.

They found between 33 and 80 per cent of cases caught the virus from people who would have had no idea they were even infected before later showing symptoms.

It takes an average of six days before a person develops the tell-tale signs of Covid-19, which includes a fever and persistent cough. But in those days prior to symptoms, patients are infectious and can pass the deadly virus onto others.

Transmission is most likely one day before symptoms start, lead author Miriam Casey and team concluded, but can happen as early as three days before.

Controlling presymptomatic spread is crucial for keeping on top of the disease when lockdowns are eased, experts said.

It hinges on the success of contact tracing, which involves identifying all individuals who have been in close contact with a confirmed case.

Looking at all the evidence, Ms Casey and colleagues estimated 56.1 per cent of transmission was from people before they showed symptoms.

Overall, a substantial amount of presymptomatic spread is contributing to the crisis, the authors warned.

Researchers found, however, that people without symptoms had similar viral loads to symptomatic patients. They were not able to prove this made them as infectious, however.

Having a high viral load — the number of particles of the virus someone is infected with — may make people more contagious, evidence suggests, because it can also give the bug a ‘jump start’.

If someone is infected with a larger first dose of viruses it might mean their immune system gets overwhelmed and takes longer to fight back against the infection.

The South Korean study, published in the journal Thorax, said: ‘Asymptomatic individuals… harboured a comparable viral load compared with that of symptomatic patients and may thus act as a meaningful driving force for the community spread of Covid-19.’

In a linked podcast, lead author Professor Sung-Han Kim said the findings ‘support the possibility asymptomatic individuals are contributing to the ongoing community spread of Covid-19’.

‘Our data add further support to the general public use of face masks, regardless of the presence of symptoms, and suggest that the scope of SARS-CoV-2 testing should be expanded to include asymptomatic individuals in high-risk settings, such as nursing homes or healthcare facilities.’

But Dr Jeff Barrett, a senior scientific consultant at the Wellcome Trust Sanger Institute, said: ‘The samples taken for this analysis are an average of 13 days after initial diagnosis. We now understand that the total viral load drops off over this time period.

‘The results therefore don’t support the statement that “they may have a key role in driving the spread of Covid-19”. To make such a claim would require testing individuals at the peak of their infectiousness, not two weeks later.’

Dr Julian Tang, an honorary associate professor of respiratory sciences at the University of Leicester, pointed out another finding of the study – that ‘viral load does not necessarily impact on clinical severity’.

Essentially even if a person has a high viral load, it doesn’t necessarily mean they will become unwell with the disease.

‘Covid-19 is mostly a host-immune mediated disease,’ he said. ‘The viral load does not really impact on this in most cases. Not all ICU cases have high viral loads – in some, the virus has already cleared before they are even admitted to ICU.’

The full spectrum and distribution of the severity of symptoms are still not well understood.

‘Asymptomatic cases can spread virus aerosols simply by breathing and talking, which may be the most common way we transmit this pathogen – even with just a typical viral load.

‘We breathe and talk a lot more than we cough, so if everyone wears masks in indoor areas in the presence of other people it will also contain the virus quite effectively in those who don’t even know they are infected, and reduce transmission.’

The review of literature by researchers led by PhD epidemiology student Diana Buitrago-Garcia, at University of Bern, Switzerland, covered 6,600 people.

The participants, in 79 studies, had been screened for the coronavirus because they were a close contact of a Covid-19 case, for example.

One study included was based on the swabs of all 634 passengers from the Diamond Princess cruise ship, which suffered an outbreak of Covid-19 in February.

A total of 1,287 were defined as asymptomatic throughout the course of their disease. The researchers estimated that 20 per cent of infections were asymptomatic.

The rest had developed symptoms at some point while testing positive.

Dr Simon Clarke, associate professor of cellular microbiology at the University of Reading who was not involved with the research, said although 80 per cent had symptoms at some point, they are still likely to be pre-symptomatic.

He said: ‘It remains the case that on any given day, the majority of people with the virus will not be displaying any symptoms and these findings should not in any way detract from current infection control advice.’

That study, published in PLOS Medicine, found people who did not have symptoms were less likely to pass the coronavirus on to friends a family – a contradiction of the South Korean study, using different study methods.

Ms Buitrago-Garcia and colleagues looked at the secondary attack rate – the proportion of close contacts who catch Covid-19 from an ‘index case’.

It was pre-symptomatic spread that appeared to be the most problematic – that is, people transmitting the virus to others before their symptoms appear.

‘The analysis of secondary attack rates provides some evidence of lower infectiousness of people with asymptomatic than symptomatic infection,’ the study authors wrote.

They said accurate estimates of true asymptomatic and pre-symptomatic infections are critical to understanding transmission of the coronavirus during the pandemic.

How to profit from technology or hunt the next Fever-Tree