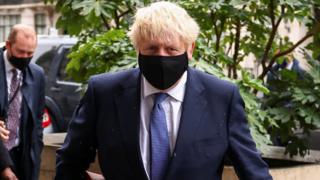 Boris Johnson has called on the public to “act fearlessly but with common sense” in tackling coronavirus.

Speaking to the BBC’s Andrew Marr, the prime minister said there had to be a “balance” between saving lives and protecting the economy.

He said: “The best thing we can do now for all those who have suffered in the course of this pandemic is bring it to an end in the speediest possible way.”

The UK has hit 10,000 daily cases for the first time since mass tests began.

Mr Johnson said he believed over the “next few weeks and months” the “scientific equation will change whether that is vaccines or testing” and there will be “progress” in beating the virus.

As a result, he said there was “hope” and “things can be significantly different by Christmas”.

But, the prime minister warned there could be “a very tough winter for all of us”, adding: “I tell you in all candour, it will continue to be bumpy through to Christmas and may even be bumpy beyond.”

The Conservatives are currently holding their first virtual party conference due to coronavirus restrictions on mass gatherings.