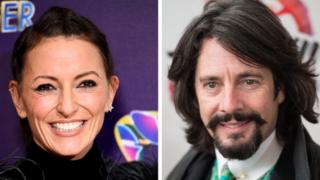 Davina McCall has been named as the host of Channel 4’s upcoming reboot of the BBC show, Changing Rooms.

The presenter will join interior designer Laurence Llewelyn-Bowen, who was on the original home improvement show which broadcast on the BBC from 1997 to 2004.

The show sees two sets of homeowners work against the clock to renovate a room in each other’s houses.

The original show was hosted by Carol Smillie.

Staying largely true to the original format, the reboot will air across six hour-long episodes.

“It’s the perfect time to bring it back, everyone is going DIY and decor mad. I can’t wait to see all the amazing transformations – I might even get stuck in myself if I’m allowed to be let loose with a paint brush.”

Lockdown measures enforced due to the Covid-19 pandemic brought about a surge in TV watching and online streaming, according to media watchdog Ofcom.

Many broadcasters, hastily came up with ideas for new TV shows to make life indoors a bit more bearable, such as the BBC’s HealthCheck UK Live and Grayson’s Art Club, on Channel 4.

Speaking ahead of the return of Changing Rooms, Jonny Rothery, commissioning editor for Channel 4, said: “With us all spending so long staring at our own four walls, there’s never been a better time to see the return of the nation’s favourite interiors show.”

Dispatches reveals how 33% of meat in shop sarnies is untraceable

Sure, that fly landed on Mike Pence's head. That's nothing compared to what flying pests have done at sporting events