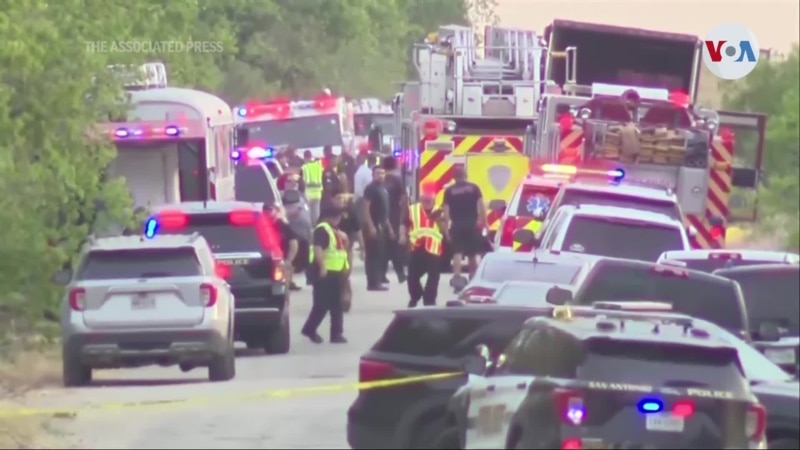 TITLE: The number of victims of the tragedy of the truck in San Antonio rises

The death toll rises in the tragedy of the abandoned truck on the outskirts of San Antonio, Texas. The investigation continues as the survivors struggle in the hospital between life and death. Jaime Moreno, in San Antonio, has the report.

More than a day after the discovery of 64 migrants inside a trailer in San Antonio, the current death toll has risen to 53, with four migrants dying after being taken to hospital.

((ENG: “It’s nothing short of a horrific human tragedy.))

ENG: “It is nothing less than a horrible human tragedy.”

11 are the people who are still struggling between life and death.

ENG: “In general, the medical personnel of the hospitals, I insist, in general, have indicated that the wounded are in critical condition with neurological, renal, and hepatic failures and with internal hemorrhages.”

And to date, only 37 victims have been preliminarily identified, while some relatives who are looking for missing persons could further clarify the situation.

ENG: “Because many times they come with false documents and we have to cross that information with fingerprints and DNA tests to guarantee their identity.”

This uncertainty illustrates the challenges authorities face in identifying people who cross borders clandestinely. The FBI has also joined the investigation.

Three people are in custody in connection with the abandonment of the truck. Among them, the driver of the van, authorities said, was allegedly high on methamphetamine when he was caught in the field near the truck, pretending to be a migrant.

ENG: I’m just saying that this person had no heart, because if he had a heart, he would have better let them go. They are human, like everyone here.

Meanwhile, the community of San Antonio mourns these 40 men and 13 women who lost their lives looking for a better future.

((ENG: “Today we mourn for those 51 immigrants who came to us to breathe that fresh air but instead found death in the state of Texas, suffering in a van or a trailer from heat exhaustion. It’s a terrible way for us to treat immigrants.”))

ENG: “Today we cry for those 51 immigrants who came to us to breathe that fresh air but instead found death in the state of Texas. (PAUSE) Suffering in a van or trailer from heat exhaustion. It’s a terrible way for us to treat immigrants.”

((ENG: “Today I’m announcing that Texas is going to add additional truck checkpoints. The Department of Public Safety will create and implement a checkpoint strategy beginning immediately where they will begin targeting trucks like the one that was used where these people perished, to make sure that we will have a better capability of perhaps stopping future trucks like that.))

ENG: “Today I am announcing that Texas will add additional truck checkpoints. The Department of Public Safety will create and implement a checkpoint strategy that will immediately begin identifying trucks like the one used where these people perished, to make sure that we’ll have a better ability to maybe stop future trucks like that.”

The White House said a crackdown on human trafficking has resulted in more than 24,000 human-trafficking-related arrests in the past three months.

According to the Department of Homeland Security, it was the worst tragedy involving migrants who smuggled across the border from Mexico into the United States.