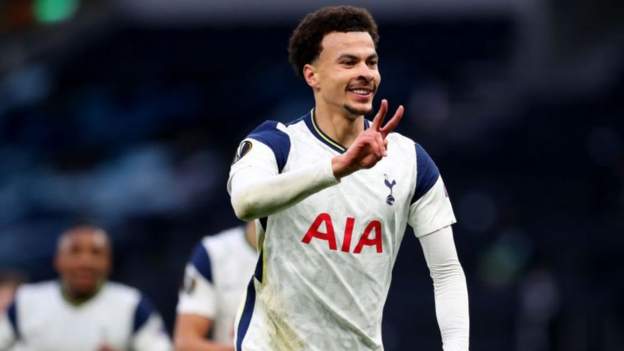 
It has been a difficult season for Tottenham’s Dele Alli, but a wonder goal and two assists against Wolfsberger in the Europa League on Wednesday showcased what he still has to offer.

The 24-year-old midfielder has played just six times in the Premier League for Jose Mourinho’s side this season and has not started a match in the competition since being hauled off at half-time in a 1-0 defeat by Everton on the opening day.

There have been talks of a rift with Mourinho, links with a move to Paris St-Germain while a tendon injury has also disrupted his season.

But Alli shone when given his chance in the 4-0 win over Austrian side Wolfsberger in the last 32, opening the scoring with a superb overhead kick.

Alli also laid on goals for Carlos Vinicius and Gareth Bale as Spurs progressed 8-1 on aggregate.

So, with Tottenham faltering in the league, can the England hopeful now help revive Mourinho’s side in the hunt for Champions League qualification?

“The goal I don’t need to speak, because everyone watched it and I believe that all around the world people are going to watch it,” said Mourinho.

“But for me the globality of the performance is what matters. He played very well in every aspect of the game.

“Of course he’s not fresh, of course you can feel that his performance like in the first leg from minute 55 to 60 is going always to go down, which is normal due to the circumstances – injured, not training for a long time.

“But in this moment when we are going to play every three days, 10 matches in March, to have Dele back at this level, is amazing.”

‘Alli had his swagger back’

The spectacular strike was Alli’s third goal of the season and first since December 2020, while he had not scored in a game he started since March last year against Burnley.

It was also the first time Alli has been directly involved in three goals during a Tottenham game since 2017 against Southampton.

“[I am] delighted for Dele, a fantastic goal,” said team-mate Eric Dier. “Step by step he is getting back to his best.

“In football everyone has a short memory, maybe they have forgotten his quality. Maybe tonight has reminded people of that.”

“We all know Dele has got that ability,” he said on BT Sport. “There have been question marks over attitude or whether he fits in with Mourinho, but it is another player proving a point.

“Wolfsberger weren’t great, so we can’t get too carried away but what I saw was magnificent. He was first class, had his swagger back, scored a worldie.”

In nine of Spurs’ 25 top-flight fixtures this season, when he was not injured, Alli was not even named on the bench, while a tendon problem has kept him out of a further four.

The midfielder has earned 11 appearances in all other competitions but this was surely his best performance of the season so far.

“For him to have been left out of nine squads, I don’t what is happening. He was magnificent, involved in everything good Spurs did,” added Crouch.

“It has been a really difficult time. He burst on to the scene at 18, was incredible, has found it difficult of late. The manager isn’t playing him.

“When you have someone like Alli playing to this level, Bale coming into it, if you can get them in the team, Tottenham will be a real force.”

Scarlett ‘a diamond with incredible potential’

Mourinho handed debuts to youngsters Marcel Lavinier and Nile John, but was most impressed with forward Dane Scarlett, who provided the assist for Spurs’ fourth.

Aged 16 years and 337 days, Scarlett is the first 16-year-old to assist a Europa League goal since Kylian Mbappe in December 2015 for Monaco against Tottenham.

“He is a diamond. A kid with incredible potential,” said Mourinho. “He is still 16, 17 soon. I believe next season he is going to be a first-team squad player because his talent is too good.

“Dane has incredible talent. I don’t want to speak too much because tomorrow I arrive in the building and the kid’s boss is going to kill me.”